A top Louisiana pro gives a year-round look at how to catch bass in the Atchafalaya Basin.

Bass pro Greg Hackney of Gonzales fishes across most of the United States, on some of the most-exceptional fisheries, as part of Major League Fishing’s Bass Pro Tour. But he gets giddy as a kid before Christmas when he talks about the opportunity to be home and fish the Atchafalaya Basin.

The Mississippi River is the most-fertile body of water in the United States, Hackney said. Home to gar fish, alligators and an abundance of bird life, he views the Basin as a miniature version of the Amazon rainforest. It also boasts a phenomenal bass fishery capable of 100-fish days with bass ranging from 3   to 4 pounds.

They key to success is following the natural progressions of bass behavior through the seasons. Hackney’s knowledge can help shorten the learning curve. 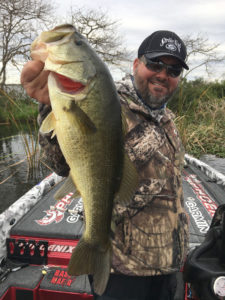 The period between the end of October and New Year’s Day represents the best fishing of the year, as the water is low and cold, combining to create the best water quality.

Once winter rolls through and water temperatures get into the low 40s, Hackney heads into the backs of dead-end canals, also known as “black water.” Water temperatures will stay colder until the end of the spawn in February and into March.

The Mississippi River flows south, all the way from Minnesota, bringing cold water into the typical warmer winters for which Louisiana is known. Dead-ends where shad have migrated are the best ones, and bass will stay there until they’re finished spawning.

“Even though a lot of those banks have cypress trees, in the cold water, those fish stay out in the middle, more on the outside breaks where the grass grows, in 3 to 6 feet of water,” Hackney said. “A lot of these canals are 8 feet deep, but they’re silted in.”

Hackney fishes those canals with small, Strike King crankbaits like the Series 4, Red Eye Shad and KVD 1.5 and 2.5 square-bills and Lucky Shad on a 7-foot, Lew’s Hack Attack Cranking Special paired with a Lew’s BB1 Pro casting reel (6:5:1 retrieve ratio) spooled with 16- or 20-pound Gamma Edge fluorocarbon. Series 4s in black/chartreuse and blue/chartreuse are his favorites, as bass don’t see many of them, and the action is incredible for enticing bites from reluctant fish.

As the water temperature begins to climb into the mid- to high 40s, everything starts to fall into Hackney’s wheelhouse.

He’ll fish a jig on the bottom, targeting wood and grass he finds on his electronics that isn’t visible from above the surface.

Once the water turns gin clear, he really likes swimming a ¼-ounce Strike King Hack Attack swim jig with a matching Rage Craw tailer on 50-pound Gamma Torque braid in the deepest part of the canal.

“I call it slow-rolling a swim jig, “Hackney said. “I crawl that sucker out there, and they’ll slack-line it every time. You won’t even feel them bite,”

Hackney prefers to swim a jig on 50-pound braid spooled on a Lew’s Custom Pro casting reel (8:3.1 retrieve ratio) paired with a 7-foot-2 Hack Attack frog/swim jig rod. A black/blue swim jig paired with a black/blue fleck Rage Craw trailer or a bluegill-colored swim jig with a junebug-colored trailer are his main choices.

As largemouth set up in their typical prespawn patterns, Hackney rarely puts down a bladed jig. It’s that productive.

“These fish hit the Strike King Thunder Cricket like they’ve never seen a lure before,” he said. “I caught a 20-pound bag of 4-pounders from a place they weren’t even supposed to be because it gets pounded with fishing pressure. (It’s) like throwing live bait before they spawn. I can even catch them off the bed with it if there is some color in the water.”

When life gives Hackney lemons, he makes lemonade. Should a cold front roll through, he’ll get to flipping and punching with a black/blue or black/neon Punch Bug on a 7-foot-11 Hackney Tour flipping stick and Custom Pro casting reel spooled with 65-pound braid.

“I can catch them here year-round punching mats, because we have mats 365 days a year,” Hackney said. “I always have a 1¼-ounce weight or bigger rigged up all the time. That is the best punching bait ever made; I’m totally blown away by it.”

Due to its dense nature and lack of appendages, Hackney can get away with a much smaller weight.

“My son, Luke, and I were working a spot, and I was fishing a Rage Bug, but I couldn’t get the bait to go through the mat,” Hackney said. “I picked up a Punch Bug, and I’d just commented to Luke I’m going to have to go to a 1½-ounce (weight) because I can’t get through this stuff. The wind was blowing pretty hard and the vegetation was bunched up pretty good. The (31/2-inch) Punch Bug got through that mat effortlessly where the Rage Bug couldn’t.”

Once the spawn concludes, bass will disperse into natural bodies of water, and the fishing is good as long as there’s current.

“The problem is that 30% of the overly flooded Mississippi River is running through the Basin, which knocks the spillway part of the Basin out until the river stabilizes and you can fish there again. When it’s too high and messed up, I fish in the parts that are out of the spillway,” Hackney said.

In 2019, the Basin wasn’t fishable until August.

Once it gets hot, Hackney looks for bass to migrate to the mouths of the dead-ends. Sometimes, the mouths will intersect with the through-canals because they have current, or the dead-end can come into a natural body of water. Current is imperative. They’ll get into cypress trees, bayous and brown grass, but they typically like current, Hackney said.

Wind-driven current, tidal current and tidal movement all create the moving water needed to get summer bass active due to the poor water quality in the Basin during hot weather.

“Those fish get in those places with current because of the oxygen and because crawfish, bluegill and goggle eye are in that area,” Hackney said.

All the pond-raised crawfish come from the Atchafalaya Basin and are used to seed the area, Hackney explained, so there is no shortage of food or hungry bass.

“When the water gets hot, the crayfish get hard.  When the crawfish season goes away, they catch the crawfish out of the Basin and put them in rice fields. That’s where the crop comes from next year.

“There are a lot of natural lakes in the Basin, and you get wind in there which attracts the fish.”

Hackney will fish those natural lakes through the fall to combat the algae that depletes oxygen in stagnant water.

The Louisiana Department of Wildlife and Fisheries announces the Louisiana Annual Tournament Report and Information Project. […]

Denham Springs High School’s Blake Verberne and Caleb Roblin have established themselves as heavyweights in high school fishing in Louisiana. […]

It took four to five months to design and tweak the lure, but today the Ike’s Mini Flip Jig is a favorite among bass fishermen. […]

About Jonathan LePera 3 Articles
Jonathan LePera is an avid angler and outdoor writer from Ontario, Canada. He lives near lakes Erie and Ontario, home to world class bass, walleye, and trout fishing, which are separated by the Niagara Falls.