In a world consumed in having the latest and greatest of everything, it’s nice to look in your fishing tackle box and find an old friend that almost never lets you down year after year.

The winter is time for Louisiana bass anglers to “Go Rogue.” It’s time to get out that Smithwick Rogue and toss it in front of big, sleepy largemouth. It works on the big lakes like Toledo Bend, Cross Lake, D’Arbonne and False River. It also works in smaller natural bodies of water from Caddo Lake to the Calcasieu River.

Smithwick Lures introduced the Rogue in 1969 in Shreveport, where former business machine salesman Jack Smithwick was cutting the ends off of his wife’s brooms and whittling fishing lures. He soon found himself in the lure business full-time and one of the main reasons was the Rogue.

“There are definitely two areas that I concentrate on in January and into February,” said Greg Terzia, a tournament angler, director and owner of Terzia Bait and Tackle in Ruston. “First off, definitely look for deeper docks and they are best on sunny days. Fish that shade line. Cast the bait out and reel it fast until you get it to the max depth, then twitch it and pause. Just dead stick it. After a few seconds, do the same thing again. The pause is really the key to getting hits.”

Terzia recommends finding deeper docks all by themselves near shallow flats or areas if you can. That seems to hold more fish. Those docks act as kind of secondary points. Which brings us to area No. 2 — secondary points.

“They will set on those secondary points away from the bank waiting to move up to spawn,” he said. “Those are the two best spots to fish.”

Terzia recommends fluorocarbon line in 12 pound test because it casts easy, sinks and holds the bait down. He also likes a seven-foot rod with a limber tip so you can fight the fish better and cast further. 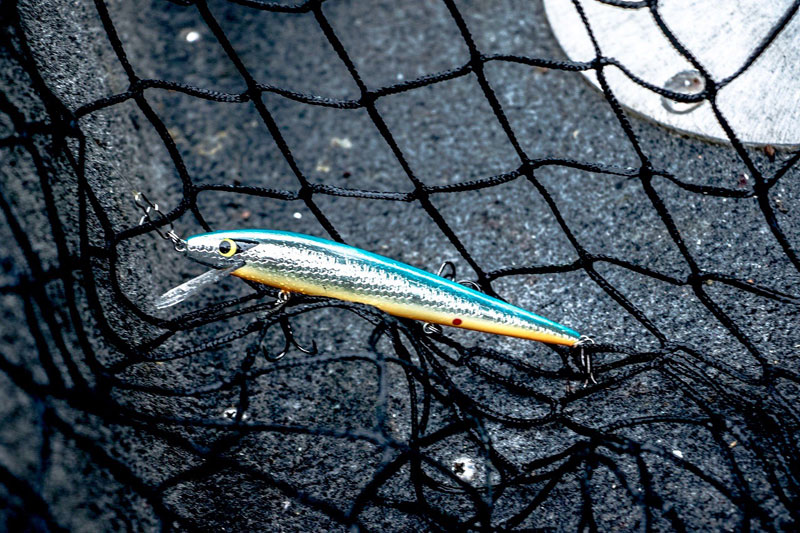 You have to spend some time learning this lure, because it moves differently and has a different action according to the way you fish it. A sharp jerk and a slow pull provide different looks for the bass. As Terzia mentioned, the pause is also most often the difference in triggering a bite or not. Be willing to experiment with different retrieves and different pauses.Then when you get a bite, repeat that over and over. You have to fish it like they want it, not like you want to present it if you want to catch them.

In January and on into February, the fish will often have a very light bite on the lure even though it has nine hooks. Anglers will throw it out, let it sit, then retrieve it and pause. Often on that pause a big bass will slowly suck it in and just hold it. You may not even know you had a bite until you begin your retrieve again and feel that mushy feeling like you are hung up. When that happens, use a slow sweeping motion to set the hook. And get the net.

The Smithwick Rogue isn’t a bait you hear folks talk about much, but it’s kind of like a “closet bait” for a lot of successful anglers. They fish it this time of year, especially when fish are staging and holding right off grass beds or thick brush and may even be on bare points and other holding spots. That is where it is easy to get the slow-rolling Rogue and it’s three sets of No. 6 size treble hooks to find bass and not get hung up in structure.

The most popular colors are still old standbys: the Golden Rogue with its gold body and black back with scale pattern and the chrome, black back Rogue with an orange belly. There are newer colors like Tiger Roan, Clown, Avocado Shad and Foxy Shad as well. Rogues also come in floaters, suspending models, the Super 10, a smaller Super Rogue, Jr and deep-diving sizes.

One of the Rogue’s most recent claims to Fame was when Oklahoma pro Jason Christie made a run at winning the 2013 Bassmaster Classic on his home state Grand Lake. Although he fell short, he landed most of his big bass on the Rogue. He credited being able to fish the lure’s exposed hooks around the lake’s big bass, which were in the process of transitioning to the spring spawn.

Smithwick was purchased by PRADO Brands in 1992 and has some hot new colors, but the basic lure has never changed. Neither has the way you fish it or the way that fish gobble it up this time of year.