Chances are if you’re fishing the marsh, you probably are according to Louisiana law

The shot was just a bit high and the 8-pointer ran off. Jimmy trailed the buck to a fence line that he knew to be a property boundary. He did not have permission to cross the fence, but he did it anyway. He found the deer another 100 yards away.

Mike ran his 21’ bass boat through an open bay to fish the marsh. He did not have permission to enter the privately owned marsh and he did not know he had left “navigable” waters.

Both of these sportsmen have something in common – they are both in violation of Louisiana’s criminal trespass law. Neither one of them are outlaws, but they are both trespassers under Louisiana Revised Statute 14:63 (LA-R.S. 14:63) Criminal Trespass law.

An examination of the statute will help to dispel some long-held myths and keep us on the legal side of the fence.

Louisiana’s trespassing law is relatively straightforward. With few exceptions, if someone enters another’s property without express permission, that person has committed trespass (see statute at end of article).

Contrary to popular belief, there are no exceptions to the statute for retrieval of wounded game onto the property of another without permission of the landowner. This fact was confirmed recently with a representative of the Louisiana Department of Wildlife and Fisheries who stated that LSA-R.S. 14:63 was the “trespass law” in Louisiana and LDWF regulations do not allow for any exceptions to the statute. And although LDWF agents have the authority to cite someone for trespassing, the representative stated “Unless there are other wildlife or fisheries violations, 9 out of 10 times, we refer trespassing violations to the local Sheriff’s Office.”

Anglers can be convicted – even if property isn’t posted

Posting of private property is no longer required by landowners. In prior versions of the law, a person charged with trespassing could defend against the charges by proving that the land was not properly posted. That defense is no longer available. 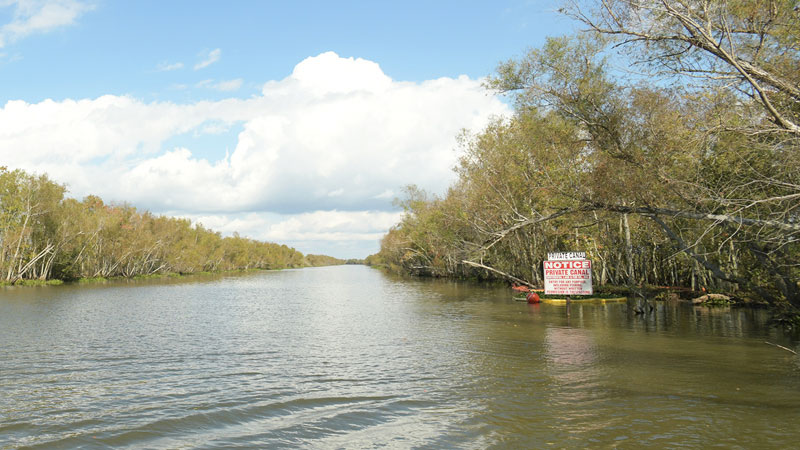 If someone is on property that does not belong to them and does not have the owner’s or owner’s representative/agent’s permission to be there, then they can be convicted of criminal trespass. The statute applies equally to land and water.

Waterways that are considered “navigable” (i.e., capable of transporting goods and services in commerce) continue to be open to the public for boating, fishing, commercial and recreational pursuits. However, defining a “navigable waterway” has become an exhaustive legal exercise.

The problem for boaters is that it is nearly impossible to determine unmarked property lines on the water. But you are still subject to fines and maybe jail time if you get caught on submerged private property. Sure, the prosecution will have to prove that you were on “private property,” but then you will have to prove the waterway was navigable or that some exception to criminal trespass applies.

Given the difficulty in proving “navigability” and determining property lines, you might find yourself in deep legal waters.

Another very important feature of the criminal trespass law is that it provides lawsuit immunity to a landowner against trespassers who claim they were damaged by or while on the property. This immunity from liability is very similar to the immunity granted to owners of “recreational use” property.

Landowners can only be held responsible for gross negligence or intentional acts that cause injury or damage to a trespasser.

A search of Louisiana Appellate Court and Louisiana Supreme Court cases indicate the courts have invoked “trespasser immunity” to dismiss a number of cases brought by trespassers against landowners. There is no reported decision in Louisiana that allowed a trespasser to successfully sue a landowner for negligence after the landowners were granted immunity under the statute.

Louisiana’s criminal trespass law is very broad and allows very few exceptions. Unless some exception applies, you are in violation of the law if you retrieve that deer or run your boat onto someone else’s property without permission.

Accidental or unintentional trespass is not a legally acceptable defense under the law and provides no excuse. Bottom line is if you don’t have permission to be there, you probably shouldn’t be.

About the author: John H Smith is an experienced trial attorney. Growing up in Houma, Louisiana, molded an avid outdoorsman. He now lives in St. Amant and works out of his office in Baton Rouge. A personal injury attorney, John’s law firm has a superlative record representing those requiring legal assistance, redressing any number of civil wrongs committed against their life, limb or property. Visit www.smithshanklin.com to learn more.

Sign Up Now
About John Smith 6 Articles
John H. Smith is an experienced attorney. Growing up in Houma molded an avid outdoorsman. He lives in St. Amant and works out of his office in Baton Rouge. John’s law firm has a superlative record representing those requiring legal assistance, redressing any number of civil wrongs committed against their life, limb or property. His website is www.smithshanklin.com.