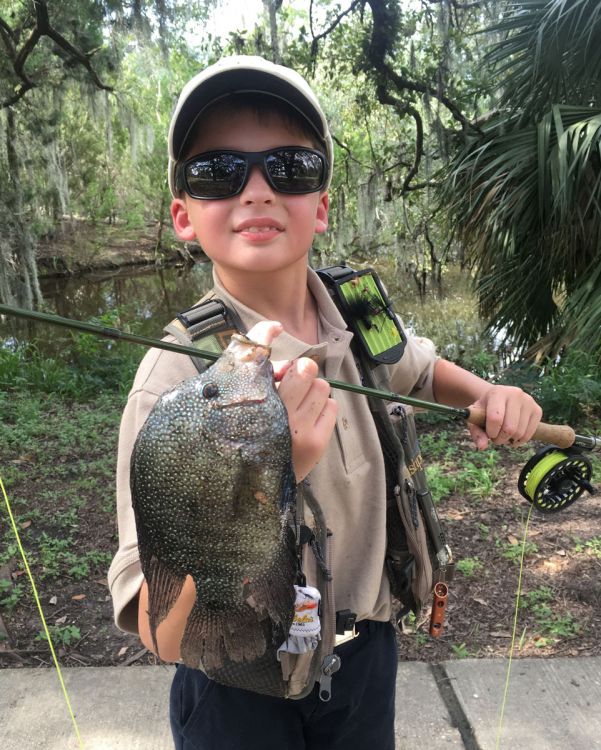 The best of 2017 — plus coming attractions

As we do every year at this time, we recognize fly fishing achievements in Louisiana with our FLC (Fly Lines column) awards.

We call them the “Flockys.” (It’s kind of like the Emmys, but for folks with real talent. )

Angler of the Year

Some fly anglers love to post glory shots with fish. But good luck getting them to share information. Not so with Dr. Charles Miller. The Tulane University professor — who made some terrific catches this year — loves to share all the details with his fellow anglers. He also loves to help those new to our sport.

Fly Tier of the Year

Ron Braud of Prairieville is recognized nationally for his detailed balsa popping bugs, known as “Stippled Poppers.” He’s active on several forums and on Facebook, helping fellow warm water tiers with his sage advice. Ron is a also a frequent demo tier at various events across the South.

Event of the Year

Mathew Roberts, Eric Ditch and other members of the Mission 6 organization held the first-ever “Fly Fishin For The Mission” saltwater fly fishing tournament in June. Held at Eddie’s Kayak Rentals in Pointe-aux-Chenes, it was a huge success. We wrote all about it in the August column.

Club of the Year

The Red Stick Fly Fishers had another great year of activities, including several group fishing trips covering fresh and saltwater. The club’s philosophy of “more time fishing” has great appeal to its 80-pkus members, and they have a terrific website (www.rsff.org).

Video of the Year

Drew Ross, a.k.a. “LooknFishy,” spent a few days fishing the marsh with friends Scott Myers and Kevin Andry. His documentary of that trip, “Here Comes Fun – Fly Fishing Southeast Louisiana” is one of the best fly fishing videos I’ve ever seen. Thirty seconds into it and I was ready to head to the coast. Check it out at looknfishy.blogspot.com.

Blog of the Year

If you want another version of Drew’s trip, check out Scott Myers’ blog at www.bayouchronicles.com. Myers, a professional photographer out of New Orleans, has perhaps the best photos you’ll ever see in any blog. It’s not always fly fishing, but it’s always a fascinating read.

Fish of the Year

We have co-winners. Different species, but both prodigious — and caught by youngsters.

Nine-year-old David Karcher is the youngest member of the New Orleans Fly Fishers. At their summer tournament in City Park, he took first place with a 9 ¾-inch Rio Grande perch, which ate a red zebra midge.

Conclave. Festival. Fair. Whatever you call them, these day-long events feature seminars, fly-tying demos, casting clinics and more. They’re open to the public, and often free of charge.

In March, the Orvis store in Baton Rouge will again host the “Fly Fishing Film Tour.” And on July 28, the North Louisiana Fly Fishers will again hold their “Masters Series” in Bossier City.

The “Fly Fishin’ For The Mission” saltwater tournament returns to Pointe-aux-Chenes on April 28.

The 10th annual “Bass on the Fly” CPR (catch-photo-release) tournament will be held May 5 on Lake Fork in Texas. Last year, Louisiana anglers took the top two spots in the bream division, and two of the top four in the bass division.

On Oct. 8, the New Orleans Fly Fishers will again host their “Rio Grande Rodeo,” a fly fishing tournament for the largest Rio cichlid.

These are just a few of the many activities slated for 2018. We list the upcoming ones in this monthly column, and a complete list can be found on the calendar page at laflyfish.com.

About Catch Cormier 275 Articles
Glen ‘Catch’ Cormier has pursued fish on the fly for 30 years. A certified casting instructor and renowned fly tier, he and his family live in Baton Rouge.