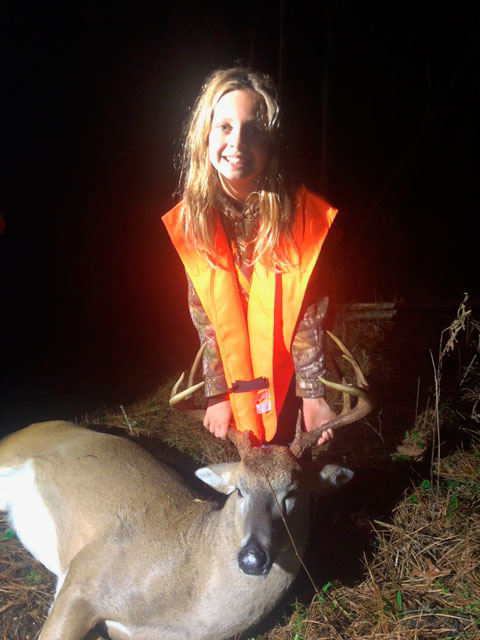 On Dec. 12,2020 I brought my two daughters 11yr and 9yr old hunting for the first time with their PaPa and myself. We hunted the morning and didn’t see anything. We went back into the woods at 3 p.m. We picked this stand over another because of the chance of rain that evening and wanted to be in box stand. At 5 p.m. a buck and a doe walked into the food plot out of the very back woodline. I knew he was a good buck but didn’t realize he was as big as he was. I moved my daughter onto my lap because the stand was so small there wasn’t enough room to even consider switching chairs. I picked up our rifle and put it on him. Once I confirmed sight picture I handed the reins over to her. She said she had the cross hairs right behind his front shoulder. I confirmed one last time and told her to shoot whenever she was ready. She shot and he reared up and ran out of sight. Blood was found where he was shoot and after following the trail the deer was found about 40 yards from where he was shot. He was taken at 80 yards with an AR-15 shooting 64 grain bullets. The buck weighted 175 pounds and had 10-points. Scoring roughly 126 points. The buck was taken in Copiah County, MS. Skylar Chalmers from Geismar,LA