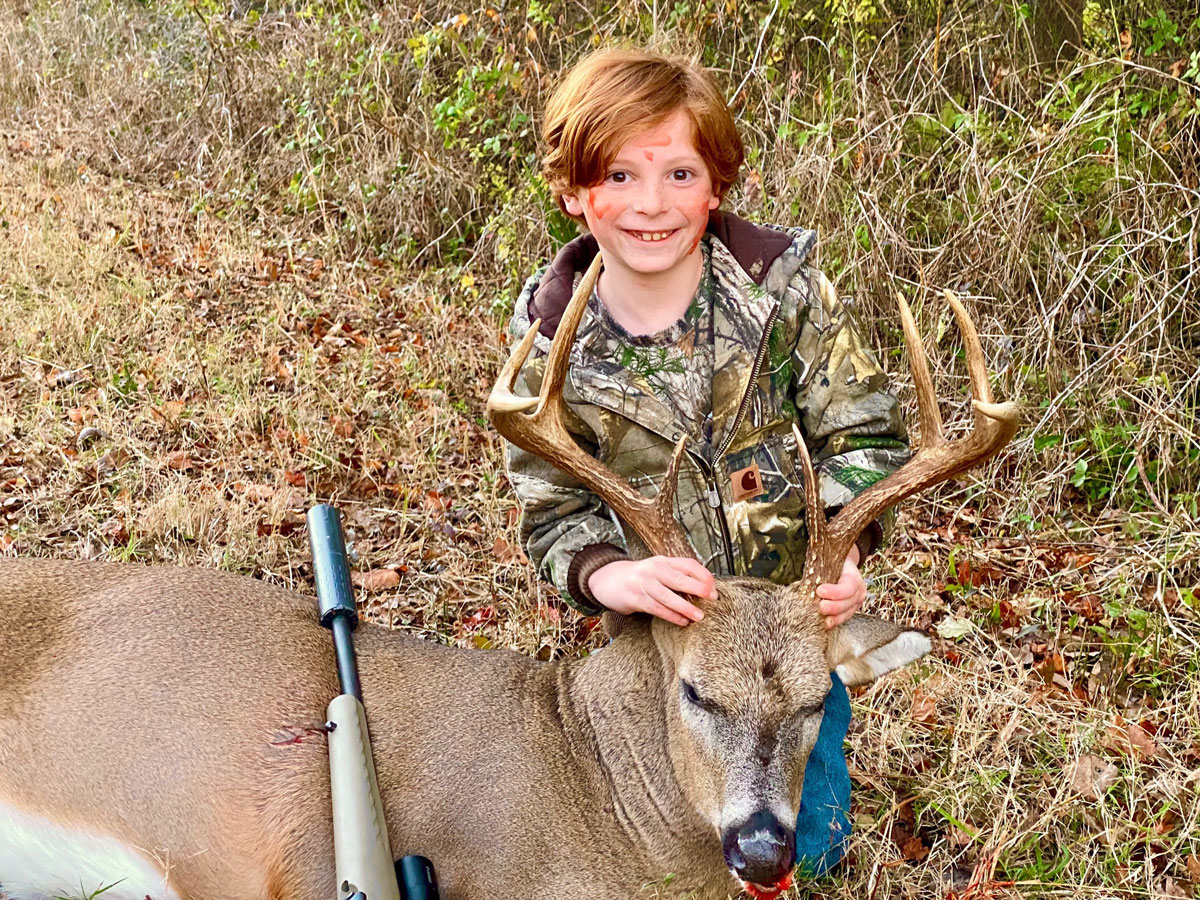 My name is Clarke McRae Williams IV. I am 9 years old, and this is the story of how I killed my first deer. It was a nice fall afternoon and my dad took me out to a stand that my Papa had fixed up for me. After a boring 30 minutes, we saw two small does and I begged my dad to let me shoot one of them, but he said we should wait to see if a buck might come out. After those two does walked off I thought I had missed my chance.

After another 30 minutes, a bigger doe came out of the brush and since it was getting late, my dad said I could shoot her. We got the 300 Blackout rifle adjusted and ready to shoot. The safety was off, and we were just waiting for the doe to turn broadside for a perfect shot. All of a sudden, a big buck emerged from behind our stand and nearly ran in to the doe! So now we had the buck standing right where the doe was standing, and it was already broadside. My dad whispered “Shoot! Shoot!” I took a deep breath and slowly squeezed the trigger. BOOM!!!

The buck jumped up in the air and ran off. When we got out of the stand, I was so nervous because I thought I had missed him! We walked over to where he was standing but didn’t see any blood anywhere. After several minutes, FINALLY, my dad found a tiny spot of bright red blood! My heart was pumping so fast! One drop, two drops, three drops of blood… But then, we lost it! It was getting dark and I knew we didn’t have much time. My dad told me to stand at the last spot of blood and let him make a “big loop” in the direction that he had run.

All of a sudden, I heard my dad say “Clarke! Hurry! Come quick!” I didn’t know if it was good news or bad news but I ran as fast as I could. As soon as I got up the hill, I saw him laying in the middle of the road with his big antlers just staring at me! I was so excited! We went over to the buck and I could see that I had made a PERFECT shot, right behind his front shoulder.

My dad was screaming and hollering, giving me high-fives, and big hugs! Just then, my grandparents pulled up on their Ranger and they were so excited too! We all took pictures in the field before the sun went down. My friends, William and Stewart Haddox, were both at the camp, and I got to show them my first deer kill and tell them this story! It was a memory that I’ll cherish for the rest of my life!

And to top it off… I also caught my first white perch on the same weekend!

Melvin Brown Jr. arrowed a 9-point, 215-pound buck on Sept. 16 while hunting from a deer stand on a lease near Fayette, Mississippi. […]