A new artificial lure on the shelves and in tackleboxes is doing more, much more, than giving lip service to the process of catching bass.

Terminator’s Shuddering Bait has a cupped swimming lip that gives it a unique, side-to-side shimmy, especially when used with a soft-plastic trailer, according to Ott DeFoe, the reigning Bassmaster Classic champion. He started praising the bladed jig long before it arrived on the market earlier this year.

A week-and-a-half after winning the Bassmaster Classic on his home waters in Knoxville, Tenn., DeFoe took a few minutes on an off-day to talk about the artificial lure he helped design for Terminator Lures.

The Terminator Shuddering Bait is a game-changer in the world of bladed jigs, DeFoe said. 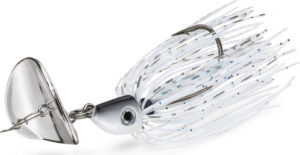 “It’s a different bait, for sure, than anything on the market. It’s a bladed jig that everyone should have in their tackle box,” he said, adding that he believes no other vibrating swim jig moves as much water on the retrieve as the Shuddering Bait.

The new, bladed jig was instrumental in his success in a tournament two years ago at Lake Sam Rayburn, he said, noting  that bass bit consistently on a ½-ounce green pumpkin/orange model that was perfect for the off-colored water he was fishing.

Over the past few years, he said, “I’ve had some 4-pounders on it. I haven’t had any giants, but I’ve had real nice fish.”

The artificial lure is innovative from front to back, a combination that includes the blade, iighead, skirt and soft-plastic trailer that make it shimmy like none before it. It is available in ½- and 3/8-ounce models in nine baitfish colors and six blade colors.

“The ability to match the blade to the bait is something that, with most bladed jigs, you just don’t have. And you can have a matte-finish blade that doesn’t have the flash when you don’ want it,” DeFoe said.

It’s also armed with “super sharp” 5/0 VMC hooks to handle big bass, he said, and there are quality components from the snap to the split ring that attaches the body to the blade.

When DeFoe and others got their hands on the early prototypes, they looked closely at the unique, cupped lip and saw room for improvement.

“We thinned it down in a lot of places. There was extra material, and it kind of messed up the action a little bit. Once we thinned it down, that livened it up some, made it more lively,” he said.

The idea for the cupped lip was borrowed from a crankbait design the company had tinkered with earlier, DeFoe said. It was a success, particularly after the tweaks were made.

Defoe, 33, believes the Terminator Shuddering Bait will be effective, very effective in Louisiana and elsewhere in the south, heck, across the U.S.A. A soft-plastic crawfish imitation ought to work lights out as a trailer in and around the Sportsman’s Paradise, he said, particularly on the black/blue/purple,aka bruise, model.

“Having a trailer keeper extends the life of that bait and makes more of your casts productive,” DeFoe said, “because your trailer’s going to stay in place, where it needs to be.”

He said the new bladed jig’s castability makes it both an open-water bait and a chunk-and-wind bait.

“For me, I find myself going to it in really dirty water when the fish want a moving bait,” he said, adding that he uses 50-pound braid and 17-pound fluorocarbon whenever he fishes the bait.

DeFoe likened the slow, methodical, thumping action to a spinnerbait with two Colorado blades. The thumping vibration is slower than other bladed jigs, an action that is effective in water with limited visibility.

“There are a lot of different bladed jig-makers, a lot of different styles, but no one ever had one that I felt worked really well in the muddiest of water until I got my hands on this,” LeFebre said. “It’s just got a really, really good thump to it.

“When you think you can’t get a bite — this is one of those baits that will get you a bite,” Lefebre said.

For more information about the Terminator Shuddering Bait and other Terminator Lures products, call 888-231-4449 or go to www.rapala.com/terminator-spinnerbaits-jigs/