When Zack Buckner started seeing trail camera photos of a big buck hanging out behind his family business — Peterson Contractors, just outside the town of Homer — he noticed something strange.

In all the photos, one of the big deer’s eyes showed an unusual reflection, while the other eye appeared normal. Assuming the buck was blind in that eye, the deer was tagged with the nickname ‘One-Eyed Jack.’

When Buckner finally bagged the monster 8-point on Oct. 3, that eye was in fact covered with a film similar to a cataract, and it was obvious the buck was unable to see out of that eye. 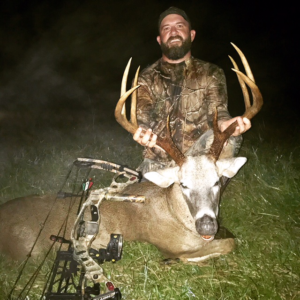 “This deer was a mystery to me; he just sort of showed up behind our office,” Buckner said. “Lots of deer hang out in the area behind the office, which features a swampy area where Bayou D’Arbonne runs and empties into Lake Claiborne. There is wetlands and small islands, ideal location for deer to feel comfortable.”

The 40-year-old ordinarily hunts a lease in southern Claiborne Parish, and seldom targets the 120 acres his grandfather owns behind the family business. However, he began hearing accounts about the big buck, so he decided to look into the possibility of hunting the elusive deer.

“Everybody was talking about seeing the buck and one afternoon in late summer, there were three vehicles parked next to the office with people out with binoculars. I spotted the buck in velvet and decided to put out some cameras,” he said. “I began getting photos of the buck when I noticed the white film over the eye, and that’s when I gave him the nickname. I also noticed his white face, indicating it was an older deer.”

Once the buck lost its velvet, it became nocturnal and for a few weeks there were no more daylight photos.

“On opening day, my sons had a football game in Minden and I didn’t get to hunt,” Buckner said. “I told my buddy I had a feeling the buck might be starting to come out before dark. I got home, checked my camera the next day and sure enough, there was he and his harem of does he had been running with just before dark, feeding on corn I had put out.”

The next day, Buckner decided to hunt — but the weather was anything but good. Sitting 25 feet high in his lock-on stand, he got soaking wet during a hard shower, and the temperature hovered near 90 degrees.

“The rain stopped and the does came to the edge of the clearing, winded me and took off. I figured I had royally messed up. The next day, Oct. 3, I decided to hunt him, although the wind was not quite right at first. I sat on the stand and felt the wind on the back of my neck and I figured the game was over. Then it shifted and I felt it in my face. Around 6:50, I was shocked and pleased when the first deer to walk out was the big buck,” he said.

One-Eyed Jack stopped, quartering away from him at 30 yards, and Buckner released his arrow mounted with a Slick Trick broadhead on his Hoyt bow. But he realized he had hit the deer a bit further back than he wanted.

“He took off toward the creek and I texted a friend with a blood trailing dog that I needed help. The pair followed the dog, but the deer — which had gone 150 yards and laid down — jumped up and ran. I figured it was all over as he headed for the swamp and would be gone,” Buckner said.

However, the dog bayed the deer on the edge of D’Arbonne Creek, and the deer wound up dying there.

The majestic buck carried 8 symmetrical points that featured an 18 ¾-inch inside spread, with 25-inch main beams and 5 ½-inch bases. One-Eyed Jack tipped the scales at 212 pounds, and was estimated to be 5 or 6 years old.