Louisiana’s duck numbers are up in this year’s Waterfowl Population Estimates conducted by the Louisiana Wildlife and Fisheries from Nov. 8 through Nov. 16. Overall, an estimated 1.3 million ducks were tallied this year, which is a notable increase from last year’s anemic 855,000 estimate.  However, this year’s count is still below the recent 5- and 10-year survey averages of 1.5 million and 1.7 million, respectively.

The 2021 season also marked a change back to the conventional West Zone and East Zone Migratory Game Bird configuration. While the previous 5 years used a three zone configuration, the old Coastal Zone is now encompassed by the West Zone. The current two zone configuration will remain in place through the 2025-26 waterfowl season. 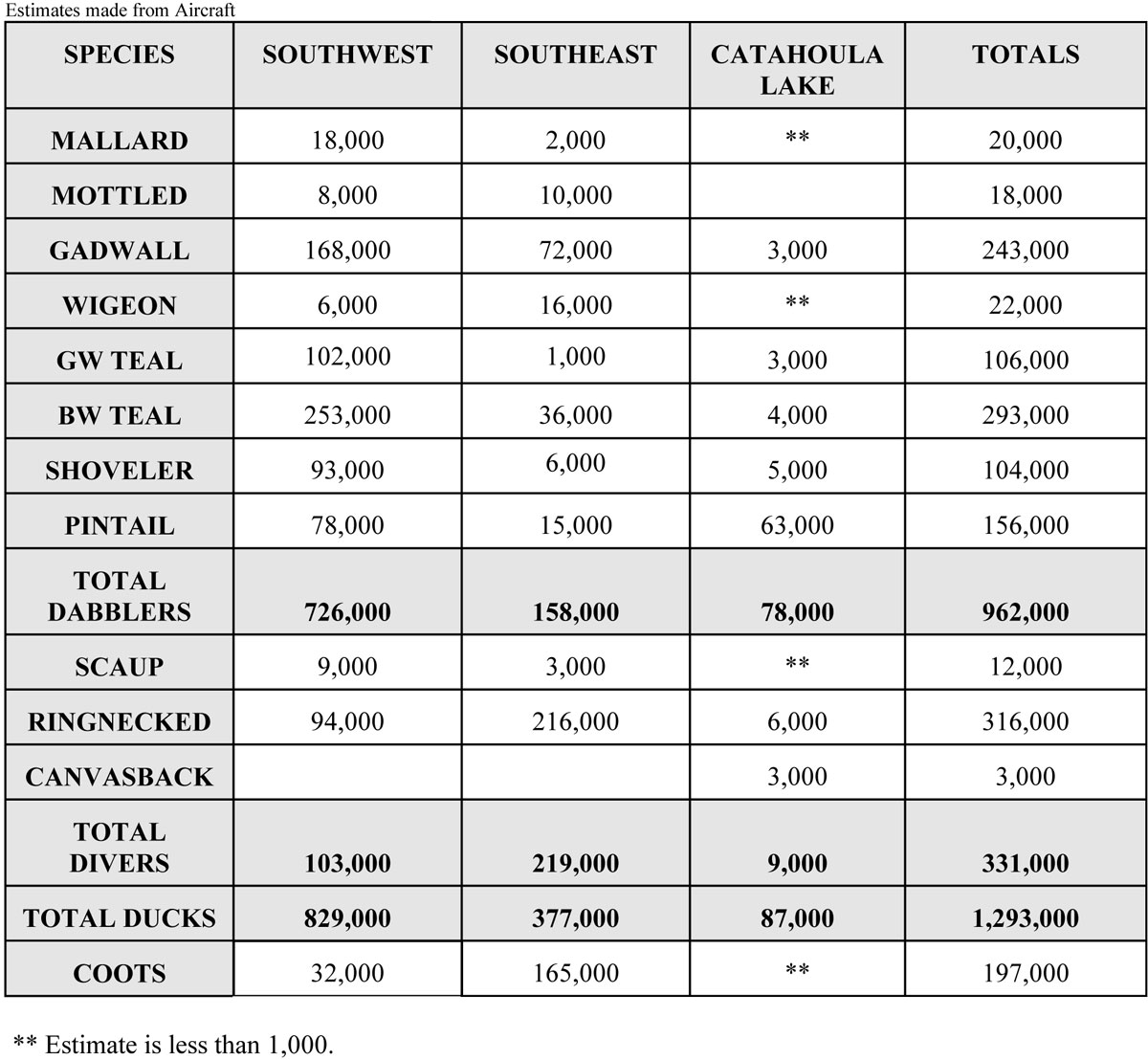 “It was the most amount of ducks I’ve ever seen in the marsh,” Tyler Fletcher said of his East Zone Opener on Nov. 20. “It was clouds of teal. We couldn’t keep the gun loaded.”

Fletcher regularly hunts the marshes along the Northshore of Lake Pontchartrain. He and his blind mates were able to fill their 3-man limit before 7 a.m. taking 17 green-winged teal and a spoonbill.

Big ducks were tough to find though.

“The big ducks were already acting like late-season birds,” Fletcher said. “They’d look, but not come down low enough to shoot.”

James Desormeaux, a veteran hunter around the Mallard Bay Area, kicked off his season a week early on Nov. 6 in the West Zone.

“We saw less ducks than other years and it was mostly teal,” he said.

“It’s kinda crazy because we normally shoot more big ducks,” he said. “But the mallards and grey were only in pairs. No big groups of big ducks. Overall, I’d say our opener was about 6 out of 10 because of the teal.”

Ryan Lambert, owner and operator of Cajun Fishing Adventures has a theory on the early season decoy-shy birds.

“The recruitment is way down and we won’t have a lot of juvenile ducks,” he said. “So we’re dealing with older and smarter ducks that make things a little more difficult.”

During the spring and summer, dry conditions were reported in the Dakota’s and into the lower Canadian provinces. Limited water resources typically limits the number of new ducks produced, driving down the recruitment. However, precise duck numbers were not taken due the forced cancellation of the Waterfowl Breeding Population and Habitat Survey over COVID-19 concerns.

Through the first couple weeks of the season, Lambert’s team has managed to take about 700 birds. Lambert reported very good habit on the east side of the river, which was able to dodge the burnt of Hurricane Ida. Additionally, new coastal land that’s been built recently is holding duck potato.

“That’s what’s gonna keep me alive this year,” he said. “We still have a lot of food.”

Another area benefitting from good habit is the Catahoula Lake region. Cody Shaw, who guides for Full Strap & Stringer Outfitter & Guide Service, reported starting off the season with low water levels, which is leaving a lot of duck food accessible. The entire region has had a dryer than average summer, which is now preventing the ducks from scattering out and instead concentrating them on the lake.

“We’re seeing a lot of puddle duck right now, more than we’re used to this time of year,” he said. “A lot of mallards, pintails and greys. The Canvasbacks are just starting to show up. But the large groups of divers like ring-necked ducks haven’t shown just yet.”

Shaw and team are betting on the current weather patterns of small cold fronts passing through on a consistent basis. This pattern is preferred over large random cold fronts. Larger fronts can put a lot of water in the Catahoula Basin quickly and change the food accessibility.

“We’re definitely looking forward to the year,” Shaw said. “We had a very strong opening day and we are looking at getting stronger as the year continues. We definitely expect the duck numbers to increase as the season goes along.”

With the uptick in this year’s bird estimates, duck hunters are optimistic about having a successful season. As all hunters anxiously wait on Mother Nature to push through the next front and provide the influx of fresh birds, remember one thing. This year, new birds doesn’t necessarily mean uneducated birds.

Take a page from Lambert, “Not a lot of dumb juveniles to kill so you have to be on your ‘A’ game this year.”

About John Manion 19 Articles
John Manion is an LSU graduate and has been writing about the Louisiana outdoors since 2009. He grew-up hunting and fishing the marshes of South Louisiana and lives in Slidell with his wife Betsy and their two girls. He can be reached at jemanion4@gmail.com.