Public-land hunters have plenty of good options around Louisiana, even after Hurricane Ida’s game-changing visit.

Dreaming of a public area for duck hunting with superb habitat, teeming with waterfowl migrating to Louisiana?

“We’re setting up pretty good,” said Mitch McGee, a veteran biologist with the Louisiana Department of Wildlife and Fisheries who has worked Russell Sage in the Monroe Region since 2016. “We’ve got greentree impoundments, moist soil, every kind of habitat you can find in this state besides coastal.”

Of the 11,911 ducks killed on the WMA last season, he said, “Half of those were probably killed on Wham Brake. It’s probably our best area.”

Wham Brake covers 4,000 acres that have been enhanced for 2021-22. McGee oversaw an aerial herbicide application that allowed underwater plants a chance to grow without competition from invasive plants but still leaving concealment for waterfowlers.

“It can be crowded on weekends, but it’s a big area, and they can disperse. It’s not too bad,” McGee said.

There are many more viable duck hunting areas for the public to enjoy in Louisiana. LDWF biologists shared their insight and harvest numbers recently. 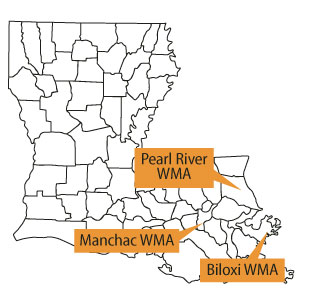 Hurricane Ida, which smashed into Louisiana on Aug. 29, left much of the lower part of the state in shambles and the fate of WMAs in the Hammond region unknown, even weeks later as the “big duck” season drew nearer.

Brad Breland said Hammond biologists haven’t had a chance to assess the condition of WMAs in the region post-Hurricane Ida. Before the hurricane’s landfall west at Port Fourchon, there was plenty of prime waterfowl habitat, which typically results in high harvest numbers.

Pearl River WMA historically is the place to be during duck season. The 8,328-acre WMA is split into two zones, with the area south of US 90 in the West Zone, where the majority of successful duck hunting takes place. The area usually has brackish marsh with submerged aquatic vegetation, including widgeon grass.

Duck hunters also converge on Manchac WMA, which consistently gives up hundreds upon hundreds of ducks. Thanks to several control methods implemented by LDWF, there has been a reduction in giant salvinia coverage, the scourge of duck hunters anywhere.

“Hopefully, this trend will hold and the submerged aquatic vegetation will flourish as it has in the past,” said biologist Jillian Day of LDWF.

Day advised duck hunters to make sure their boats, trailers and other equipment are cleaned and free of salvinia to prevent spread to other areas.

She also noted the area has experienced an increase in water hyacinths that block waters, but timely herbicide application should allow easier access. 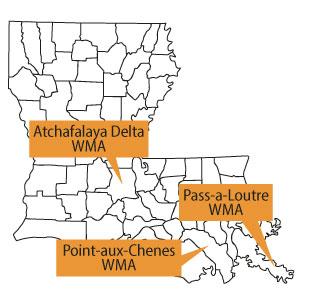 Pass-a-Loutre and Pointe-aux-Chenes WMAs felt the brunt of Hurricane Ida. Surprisingly, the aftermath wasn’t all gloom and doom for duck-hunting prospects on those WMAs, according to biologist Vaughan McDonald of LDWF.

“I think we’re going to be OK. As far as habitat, I don’t see a lot of issues,” McDonald said soon after he flew on a mid-September aerial survey.

Did Ida tear up the WMAs?

“Considering the magnitude of the storm for the marshes in Lafourche and Terrebonne parishes, I’m sure they got torn up, but it’s not what I thought it was,” he said. “I would say probably for Pass-a-Loutre, some issues will be access, because some boat launches aren’t open in Venice.”

Any significant loss of submerged aquatic vegetation can be a major concern. However, SAV presence was widespread on the Atchafalaya Delta WMA in St. Mary Parish after Ida and before teal season opened Sept. 11. The opening day harvest was off the charts, a good omen for the rest of 2021-22.

“Atchafalaya Delta probably averaged five ducks per hunter. That’s a really good number for any opener. The past few years they’ve been getting 3½, 4 birds per hunter,” he said.

“With the passage of Hurricane Ida impacting Pass-a-Loutre WMA, there is some question whether or not adequate forage will be available, but history has shown that Pass-a-Loutre is a resilient WMA, and waterfowl seem to make their way down there. Atchafalaya Delta is looking good for habitat and forage-wise and should hold waterfowl if they show up. Pointe-aux-Chenes WMA has been gaining in popularity and hunter success over the past several years.”

Blue-winged teal, green-winged teal and gadwall are the most-common species harvested on coastal WMAs. Typically, hunting success is higher toward the end of the first split and into the second split on Pass-a-Loutre WMA, he said. Hunters usually fare better during the first split, although it can be good throughout the season on Atchafalaya Delta WMA and Pointe-aux-Chenes WMA. 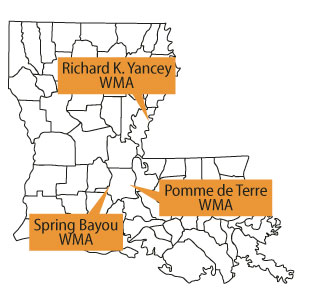 Duck hunters who haul their shotguns to a handful of WMAs in the Lafayette region hope there isn’t an exceptionally rainy fall and winter in 2021-22.

“Rainfall during the hunting season does create a problem for hunters,” said biologist Tony Vidrine of LDWF. “The more rainfall we get, the more surface water is available for ducks to utilize and feed in those areas. With more water available, ducks are more dispersed, which makes it more difficult to hunt.”

The region was spared damage from hurricanes last year, and WMAs had far less flooding from spring and summer rainfall this year compared to the last few years, he said.

To be sure, one of the most-popular areas for ducks is the expansive Richard K. Yancey WMA, which features ideal habitat and sits on the river system along the flyway for ducks: wood ducks, blue-winged teal, green-winged teal and gadwall. When conditions are right and ducks make it all the way to Louisiana, Richard K. Yancey offers endless opportunities.

Vidrine reported the best times to hunt those four WMAs are opening weekend of the first split and the entire second split, the latter getting better and better with the passage of each cold front through the state. He noted the best time to bag ducks is from the break of daylight until about noon. Some areas are better during mid-morning hours when ducks return to feed or rest. 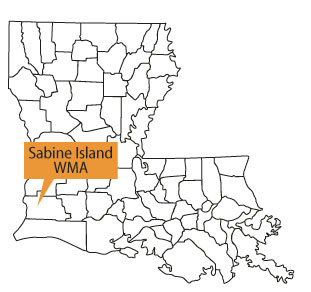 Sabine Island WMA in Calcasieu Parish has them in an upland region featuring little to no waterfowl hunting. Sabine Island is accessible by boat only. Most of the area’s users launch at Niblett’s Bluff Park at the end of Niblett Bluff Road.

“Occasionally another species of waterfowl will be taken, but for the most part it’s wood ducks,” he said. “The island topography has ridges with sloughs surrounding them. Wood ducks feed in the sloughs and sometimes can be taken when they take flight.”

He noted the island’s waters are tidal-influenced, which means duck hunters must be careful if they motor up a bayou when the water’s up, because their boats may be high and dry during low tide when they return. 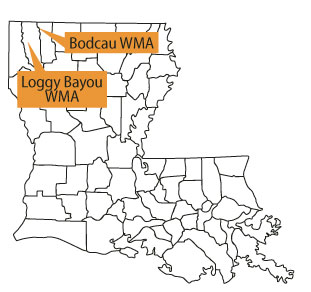 The Minden Region’s WMAs are known more for deer hunting and small-game hunting, but duck hunters aren’t totally left out in the cold.

Duck hunters should keep two places in mind this season.

“Based on last year’s numbers, Bodcau and Loggy Bayou WMAs are the best choices. Those two WMAs are also the ones with the most (duck) hunting available,” Johnson said.

Duck hunters can expect to get mostly wood ducks and mallards on Bodcau and Loggy Bayou.

When to go during the season? That depends on water levels, weather conditions, etc.

During the day, go early in the morning for a good chance at downing some wood ducks. Sometimes during midday hours there are more big ducks around for the taking. 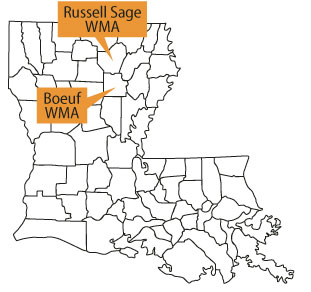 There’s more to the duck hunting heaven that is Russell Sage WMA than Wham Brake, a partially natural impoundment less than 45 minutes from Monroe. Acquired by LDWF on June 1, 2013, Wham Brake is levied most of the way around and eventually drains into Bayou Lafourche.

McGee, the region’s biologist, said, “The most-popular areas are Wham Brake and the greentree reservoir. South of Highway 15, you have Pintail Alley and the flooded bean field. Also, there are scattered moist-soil units on the management area.”

Hunters need to be aware the greentree reservoir, as well as the bean field and Pintail Alley, are flooded artificially, and that depends on the water level of Bayou LaFourche Canal, McGee said. All infrastructure is ready long before duck season starts, but the canal dictates when and how much water goes into the impoundments.

Russell Sage and Boeuf give up mostly wood ducks, green-winged teal, gadwalls and mallards, the latter more so late in the season.

McGee said the best time to hunt ducks in this region is early in the season, but some years, a push comes in January. The best time each day is in the first hour, although some hunters have rapid-fire action at midday.

“On Boeuf WMA in the Crow Field, I have seen hunters with very few birds until noon and limit out by 2 p.m.,” he said. 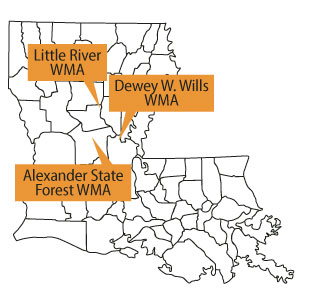 Another public duck-hunting mecca year-in, year-out is a north Louisiana WMA that gives up most of its ducks during the second split when temps and availability of floodwater are more favorable.

Ducks flock there by the hundreds. Wood ducks, gadwall, blue-winged teal, green-winged teal and mallards are the primary species.

Biologist Cliff Dailey recommended that duck hunters at Dewey W. Wills set up before legal shooting time and try to hunt until at least 9 a.m. A wood duck flight will last about 20 minutes, followed by the arrival of the remaining dabbler species. Waterfowlers must be off the area by 2 p.m.

The main threat to the WMA’s quality habitat has been the introduction of giant salvinia, which chokes waterways. Giant salvinia can blanket once-open waterways completely after it gets established, making it impossible for ducks to swim and forage for food.

Fortunately, Dailey said, prolonged, sub-freezing temperatures last winter killed most of it on Dewey W. Wells. But, he said, it’s only a matter of time before the invasive species returns during a backwater period.