Calling is way down the list of talents that turkey hunters have to master. According to one Louisiana turkey hunting legend, scouting and listening are far more important.

Turkey hunting boils down to getting the basics covered and getting things in the correct order. So when it comes to successfully chasing and calling wild “thunder chickens,” which came first ­— the gobble or the cluck?

Dan DeWitt of Dry Prong, a veteran turkey hunter and professional outfitter and a member of the Louisiana Outdoor Legends Hall of Fame, said the answer is easy. It’s neither.

“What comes first is scouting,” DeWitt said. “To be a successful turkey hunter, you have to learn how to go out and find the turkey sign, from tracks, feathers, turkey droppings to scratchings. Then you can find where they are living,” he said.

Now, how about those calls. No, not yet.

“The second thing you have to do is listen,” he said. “When you are scouting and find turkeys, don’t try to hoot or crow call or gobble and get them stirred up. Just listen. Most people get too impatient.

“When you know turkeys are in an area, find a good listening vantage point like the top of a ridge or an open spot in a draw and listen at daybreak for the gobblers to gobble and the hens to start doing a little chirping. They’ll talk back and forth to each other and let everybody know they made it through the night. Then they’ll look around good and go about their daily routine. If you try to get where you can see them or watch them fly down from the roost while you are scouting, you’ve made the wrong move. Let them be turkeys, then listen and see which way they are going. Now you are getting ready to go kill a turkey.

“Then, when the season starts, you can go get set up close to where they are roosting. You’ll know where they are and which way they’ll be going,” DeWitt said. “There’s just nothing more exciting than roosting a big tom turkey and being there when he gobbles and flies down, just to meet him face to face and lower the hammer on him. But it doesn’t always work that way. You have to know which way they go, so you can have a backup plan just in case.”

Now, we can talk calls.

“When you have a gobbler close in the morning and you (call) and he answers, just shut up. He knows where you are, and unless he heads the other way and you know it, just wait,” he said. “One mistake people make is calling too much. Another thing is, when you are hunting a 4- or 5-year-old, mature turkey, remember this: if you are calling, and he cuts you off, he has you in his plans. It may not be immediate, but sometime that day, he’s coming right back to where he heard you. You can bank on it. It may be a few minutes. It may be a few hours. But if you want that big turkey, just be patient. I’ve had that happen time and time again. Heck, if it’s a long time, just take a nap. When he gets back close, he’ll wake you up with a gobble you won’t forget. These are smart birds. Real smart birds.”

DeWitt said it doesn’t matter if you use a mouth call, slate, box, scratch box, wingbone or any kind of call, the most-effective call you can use is a properly timed, three-part yelp call.

“Those old hens, if you listen to them, they are going to go ‘yelp, yelp, yelp’ with three … yelps. Learn that sequence and the cadence. It’s important,” he said. “When you have that down, you have the old bearded ones in trouble. That is real to a gobbler — as real as it gets.”

DeWitt should know. He’s killed more than 200 wild turkeys, in 30 different states, and he has guided other hunters that have killed substantially more than that over his career. He is also the only turkey hunter who has killed a double grand slam twice in the same season. He has turned more to archery hunting in recent years, but his tips work for gun or archery hunters.

Of all his turkey wisdom, this may be the most important.

Every dominate gobbler has a special place Dan DeWitt calls the “strut zone”. It’s not a place regular hunters go, and it isn’t something he usually talks about.

“My absolute favorite thing to do in spring turkey hunting is, once you light them fly down, then listen for what they do and find their strut zone,” DeWitt said. “The big, old gobblers may not ever roost in the same tree, but about 9 or 10 o’clock in the morning, he’s going to make his way to that special place where he struts his stuff and puts on a show for all the hens that are following him. When you are scouting, find that place, and when you hunt, go set up there before he gets there. It’s the best place to kill a big mature bird.” 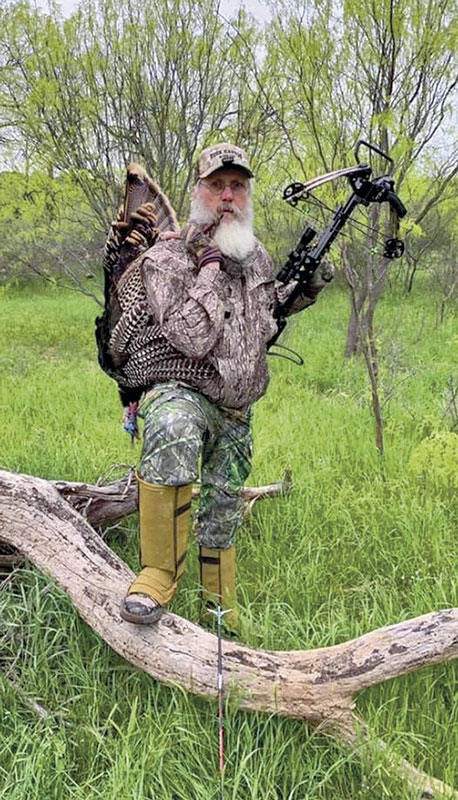 DeWitt said once you’ve found a gobbler’s strutting area, you can verify the exact spot at other times of day by finding feathers, strut marks where he’s been dragging his wings or where he’s really been tearing up the ground. When Dewitt has that spot pinpointed, he doesn’t worry about hunting the roost or calling to the bird, he just visits the strut zone and sets up in a good spot. It can be a pretty long way from the roost, too, he said.

Normally, when he and the turkey are in the strut zone, he doesn’t even have to call, but if he does, he uses what he calls a spit and drum call. The turkey makes a spitting and drumming sound when he’s in the zone. DeWitt said if you have to make that call to get him close, be ready.

“That is his spot, and he’s the dominant turkey there,”  he said. “He’s already run off the other turkeys. That’s his house. If you gobble at him, he’s going to be mad and come right at you. Make sure you are ready.”

PFDs are an important part of boating safety, but they only work if you’re wearing it. […]

Mounting a scope on your deer rifle; how to do it correctly

Your rifle’s accuracy, to a large extent, depends on how the scope, rifle and mounts fit. Here’s how to mount a scope on your deer rifle. […]

About Kinny Haddox 391 Articles
Kinny Haddox has been writing magazine and newspaper articles about the outdoors in Louisiana for 45 years. He publishes a daily website, lakedarbonnelife.com and is a member of the Louisiana Chapter of the Outdoor Legends Hall of Fame. He and his wife, DiAnne, live in West Monroe.