No doubt about it, turkey hunting in Louisiana has seen better days.

Before the recent scourges of flooding, persistent heavy rainfalls and feral hogs, turkey hunters once were able to have two to three birds roosted before opening day.

Not anymore; many hunters are happy to hear one.

Yes, Louisiana’s habitat is suffering from a silent spring, and it doesn’t appear to be getting better anytime soon, with even more season closures and reductions on Louisiana’s Wildlife Management Areas planned for 2021 and 2022.

“I would like to be able to dismiss some of these concerns and offer security in the fact that birds across the state are doing well, but that simply is not the case,” said Cody Cedotal, wild turkey study leader for the Louisiana Department of Wildlife and Fisheries and an avid hunter himself.

Cedotal does provide a share of both optimism and pessimism this year, depending on where hunters choose to hit the Louisiana forests.

“Based on moderate-to-good reproduction the last couple of years, I would predict a good season in 2020 for the northwest and southeast parts of the state,” he said. “Based on the same information, the outlook appears pretty bleak for the parishes up and down the Mississippi River, as severe and prolonged flooding has impacted these areas for multiple years now and is currently threatening to do so again.”

Despite low public-lands harvests in other areas, Cedotal recommends the 600,000-acre Kisatchie National Forest for the spring of 2020.

Hunters need to scout for longbeards near clear-cuts, burns and stripped rows. Doing some cutting and running at mid-day and the afternoon has worked well for hunters who have had a hard time working gobblers after sunrise.

The seasons are as follows:

Other public areas that usually offer a decent number of gobblers include Fort Polk WMA near Leesville and nearby Peason Ridge WMA — together offering over 175,000 acres of turkey hunting habitat.

It’s important for hunters to know that all or portions of these areas can be closed daily due to military activities, and daily clearance must be obtained. Information on open areas and special ATV regulations can be accessed at: https://home.army.mil/polk/index.php/my-Fort-Polk/fort-polk-huntin.

The turkey seasons on these two military WMAs are as follows: 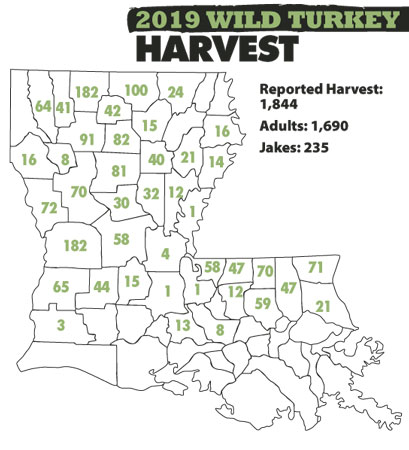 The No. 1 strategy is to scout and locate turkeys before opening day arrives, and the best way is to frequent edges of clear-cuts, streamside management zones and burn areas.

Look for tracks, feathers and droppings as well as listening for gobblers at daylight in areas you find sign.

Hunters walking dusty roads and fire lanes when scouting should make a mental note of areas where tracks and strut zones are found, then cover them with sand or dirt so you won’t have any competition on opening day.

Baton Rouge’s Oscar Long has scored on many longbeards on various public lands in Louisiana. 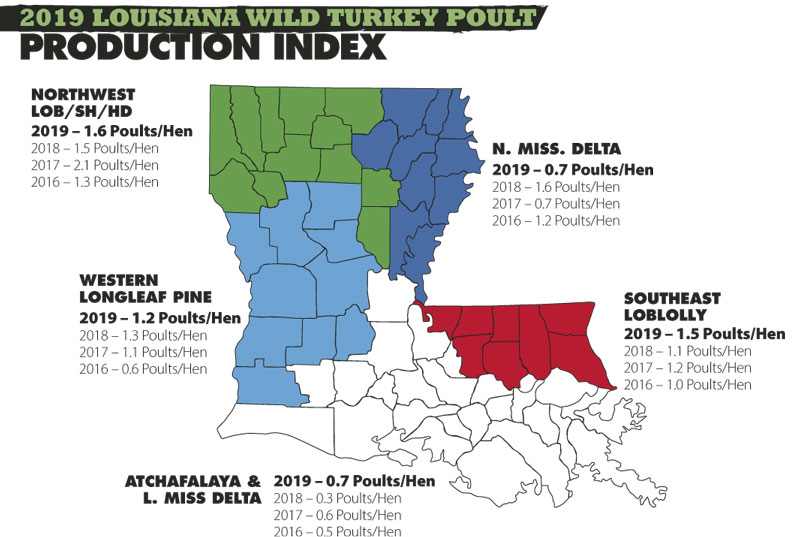 “Kisatchie National Forest is absolutely a great area to find turkeys,” he said. “It’s phenomenal just due to its sheer size . . . so vast and spread out.”

On opening day, success can be easy or hard depending on the circumstances ,according to Long.

“On opening day, you get a real good opportunity to kill what I call a young, dumb bird, one that may just jump down off the roost and come in right to you,” he said.

On the other hand, Long advises patience if hunters find other competition that pressures gobblers to shut up or just stay on the roost a while longer.

“I was once hunting a bird I located on Sherburne WMA,” he said. “I left him at 10 a.m. as there were other hunters calling at the bird.

“When I returned to my truck, there were three others parked in the same area. Eventually, the people came out, climbed into their vehicles and left the area.

“I went back in and pulled my box call out, did a few clucks, and the turkey gobbled,” Long said. “I walked closer to him, using my diaphragm and doing some cutting.

“At 50 yards, I see three gobblers coming. I yelped, and all three gobbled at the same time. I shot the one strutting and rolled him.”

As the season progresses, Long knows that hunters are left dealing with birds that have been called to, walked on and shot at during the early season.

“I find those public-lands birds go silent later in the season,” he said. “I have taken late gobblers by not calling as much and doing so softly while scratching some leaves.

“You just have to be more patient on public lands and get even quieter and more hidden as the season progresses.”

For more information regarding locations, dates and regulations for public lands of choice, consult the Louisiana 2019-2020 Hunting & WMA Regulations pamphlet.

Louisiana hunters are limited to one gobbler per day, and only two per season.