Through the years I started setting my trail cameras into video mode more often. There was just too much left to the imagination that typical trail camera photos did not show.

Who won the duel of those sparring bucks? Was that really all of the deer in the bachelor pack? Did they have a set of massive antlers pushing the doe? Now there’s no wondering. All of those passing animals missed in pictures are captured when video mode is turned on.

What you can see

Last season, I got a clip of a buck shaking off water after a rain storm. One evening a deer and coyote were eating persimmons under the same tree together. Sometimes deer dance and jump on their back legs like kangaroos.

Watching sleeping animals stir with nightmares is fun too. After having so many close encounters with these same bucks, I bet they are sometimes dreaming of me.

I’ve had bucks with locked antlers in pictures, but always wondered what those tussles really looked like. Last season, I captured several exciting videos of battling bucks.

Even better, there is always the chance for filming ground action of the hunt. I’ve had several bow and pistol hunts take place where I was able to capture the shot on trail camera video.

On a hunt years ago, I witnessed a hot doe and small rutting buck pass in front my trail camera twice. On the first sighting they were jogging with the buck about 20 yards behind. Later in the hunt, the doe came back, slowly feeding with the same buck walking behind her with his nose to the ground.

I was excited to check those trail camera photos, but to my astonishment, there was only blank photos followed by a set of a lone doe feeding. The less than one second trigger was still too slow for a running doe, and that 5 picture set had finished by the time the buck ran through a few seconds later. Then, on the second pass, the camera delay didn’t reset in time to snap any pictures of the buck. These photos showed none of the prime rut action that was actually taking place. After that entertaining hunt, I began setting cameras to take videos. As expected, many more bucks in tow began showing up in the clips.

Often times a picture makes distinguishing the size of horns a tough task; whereas a video will show many antler positions to better determine spread, beam length, point totals, mass and unique characteristics. Also, estimating a deer’s age and weight is easier with more angles of the neck and body to view.

I like setting cameras in video mode near food sources. These clips show exactly which deer are stopping for lengthy periods to have a meal or just casually passing through. Sometimes it’s only non-target animals creating all the leftover chewed forage.

Phases of the season

During the early season, when bucks tend to move very little, I’m looking to set cameras near the community rub patch. The woods may seem void of fresh rubs, but there is usually a group of mini-hookings, 10 yards in diameter, that bucks create near their bedding areas. This is where I get the majority of bachelor packs on film. However, a picture will often hide the biggest buck staying in the back of the pack.

During the rut, it’s amazing to see a set of big horns moving through several seconds after a running doe tripped the trigger. Usually these few seconds was just long enough for the buck to be completely missing if the camera took a photo. These chase-filled rut videos often help pin down the best dates to be in the stand for future years.

I find the best place to set trail cameras during the rut months is under lick branches with large community scrapes where several deer trails connect. Sometimes I get over a dozen different bucks tending one scrape. I avoid setting cameras on any small scrape along a single path. 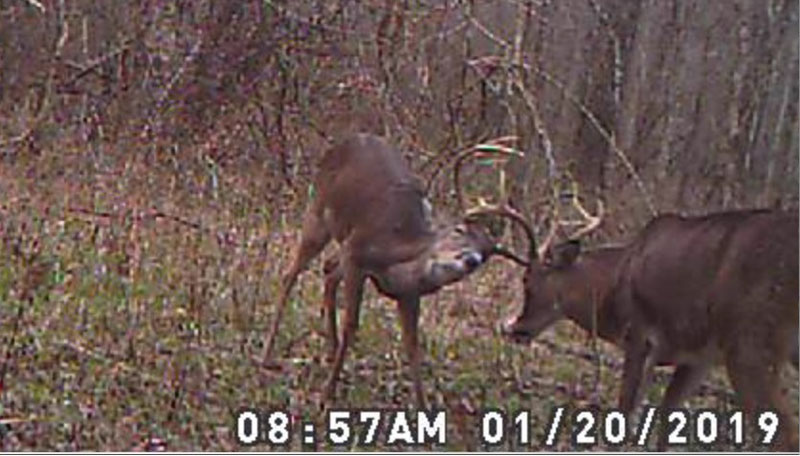 During the pre-rut, the bucks check out these the scrapes often to see if any early does are in heat. Since pre-rut bucks tend to slowly follow does by 20-40yards, I’ll have my camera set for taking longer clips.

Want to know if the buck you’re after isn’t already in the taxidermy shop, keep the camera in video mode throughout the end of the season. During the post-rut the bucks keep coming to these large community scrapes and lick branches to see if any does are in heat and which bucks still need to be fought with. They rarely pass by without creating an action filled video.

A nice 8-point that ducked into a higher shot from my slow 160 fps recurve arrow was seen on video feeding weeks later. On another hunt, my recurve arrow passed through a buck on both sides the ribcage from a 10 yard broadside shot. At the time, I was in disbelief that I couldn’t find that deer, but footage of the buck a month later proved “no man’s land” does exist. The next year, trail camera footage showed the same buck with a scar, sporting a non-typical rack.

Besides deer it’s always fun to see all of the other animals in action, especially predator animals hunting game. One video has bobcats stalking as a pair.

Bears make for some exciting videos to watch with their playful personalities. Well, when they aren’t busy destroying your camera.

Most trail camera picture sets miss many hogs that are passing by. A video of that same sounder may show dozens of hogs in one group. Watching big boars use their tusks to bite and break tree limbs is just as entertaining as bucks making scrapes and rubs on film. And these massive hogs love to fight, so if a trail camera has audio in video mode expect grunting, roaring and high pitched squeals.

I try to check cameras in video mode more often. I select locations where less small brush is in the trigger range since videos take up more memory. One windy day can quickly fill up a memory card or drain batteries with false triggers.

Be sure to check the trigger speed of video mode. Many cameras have a fast, less than 1 second delay, yet videos can lag nearly 3 seconds to begin. If the camera is slower for videos, I set it on an angle to the game trails.

Many of the scenes happen at night, so having a blacked-out camera that has no red lights is important for letting the animals go upon their way undisturbed to keep coming back. My last trail camera article detailed how I buy all my blacked-out cameras for around $30 and self-paint them.

Give video mode a try this season on trail cameras. There’s a good chance you’ll give up on those simple snapshots once seeing movie clips of all the action.