Making mock scrapes can put hunters a step up on finding deer and places to hunt once the season opens.

Every experienced deer hunter has a few good tricks up his sleeve to pattern deer and get the best possible action during the season.

Dan DeWitt of  Dry Prong is no exception — for the most part. But his tricks are exceptional, especially when it comes to drawing deer out. Among his main tools are mock scrapes.

DeWitt is a master of the outdoors. His father was a full-blooded Creek Indian, hence the name for his approach to deer hunting and the name of his company — Old Indian Tricks — which produces synthetic deer scents. 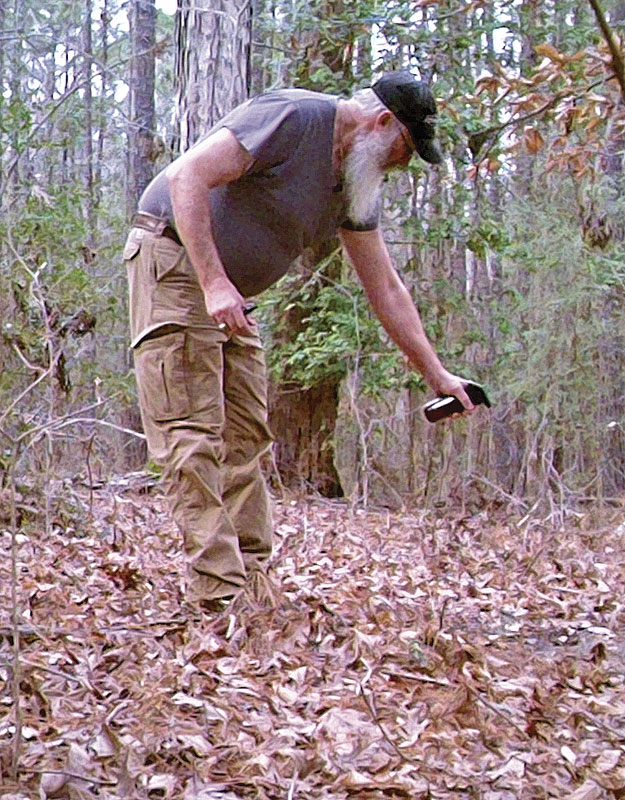 “I maintain mock scrapes most of the year, but most people don’t have time or patience for that because in the spring, they are busy with ball for the kids, fishing or chasing turkeys.” DeWitt said. “But that’s okay. It’s still not too late to use this technique to not only bring more deer into your shooting woods, but to be able to pattern where they are going to come and go.”

Basically, making mock scrapes is beating the deer to their own punch. It’s a combination of making scrapes and rubs that mimic the same type of trails deer make. DeWitt likes to follow old scrape lines when he puts out mock scrapes because he knows that is an area the deer already like to travel. People think of bucks working scrape lines, but does work them more than the bucks do, except maybe when bucks become more aggressive in the heat of the rut. But they aren’t just a “deer season” pattern. Deer use these trails all year because they become comfortable with their surroundings. And scrapes are what DeWitt calls “social arenas for deer” where they come to see other deer and, in the rut, to find a mate.

An actual scrape consists of two parts — an area on the ground that the buck paws all the debris out of and marks as his territory. It usually comes under a “licking branch” that is anywhere from 4 to 6 feet off the ground, above the actual scrape. Deer chew on these branches and leave their scent by rubbing their preorbital glands on them.

To make a mock scrape, hunters simply take a heavy stick and clear out a 2-foot circle on the ground, put some kind of scent in the scrape and on the limb. A line of these will attract deer.

As DeWitt said, “It works.”

But hold on just a second. You can’t just go to the woods and start making mock scrapes wherever you feel like it. They have to be deer-worthy.

DeWitt likes to find old scrape lines. Those work best. They are areas deer walk all year, being creatures of habit. Several deer will walk the same lines, although bucks want to be territorial.

“When I find a spot that I like, the first thing I do is make sure it has a good, sturdy, overhanging limb,” he said. “I dig out the scrape with a stick and then spray the limb and the actual scrape. I basically am just refreshing what they’ve already done. They are conditioned to think another deer did it, and they are more likely to come back and visit it more regularly. You can also put in mock scrapes near their old trail lines, and once you get them coming to them, they will become regular paths.”

Don’t just make one. The more mock scrapes you make — without getting carried away — the better chance you have of bringing more deer in and patterning them on a regular basis. When hunting season approaches, you have to see which ones are being used the most and which areas are producing more deer photos on trail cameras.

“When it comes time to hunt, you simply set up your stand near the ones that are the most active. It’s just common sense,” DeWitt said. “I always like to hunt out of lean-to or climbing stands so I can be flexible. I like to pick spots on the northeast side of where I think I’ll see the deer, because we usually have prevailing winds from the southwest until it gets cold.”

Sometimes, there are no trees suitable for stands in an area, so DeWitt hunts out of ground blinds when he has to. The most-amazing part of his strategy is that he hunts primarily on public land, including the Kisatchie National Forest in Louisiana or the Homochitto National Forest in Mississippi. He reminds hunters to make sure that they are following rules and regulations, even regarding mock scrapes. Some areas do not let you put anything on the ground to keep deer from congregating in one area. In that case, you can use a dripper or other hanging dispenser over your scrape that you can remove when you leave.

DeWitt does not hunt out of box stands. He said box stands can lead to one of the biggest no-no’s of deer hunting.

“If you aren’t careful, and you hunt out of the same box stand all the time, you can pattern the deer to know that you are there,” he said. “I had a group of hunters in Mississippi who were seeing tons of big deer on their game cameras but never saw them out in the green fields or at the feeders when hunting. What I found out was, they drove their side-by-sides to within 30 yards of the stand, got in the stand and hunted and never went anywhere else. The deer had been conditioned to avoid them. But when we got out and walked the perimeter of where they were hunting, we found buck sign everywhere — rubs, scrapes and trails where the deer were literally walking circles around where they were hunting.”

“Reading social media, you might get the impression that there are hundreds of mock-scrape experts out there that just went out and became overnight sensations at it,” DeWitt said, “but that is rarely the case. Here’s the thing about making and hunting mock scrapes: if you want to become great at making mock scrapes, first, you have to become good at it. And before you can become good at it, you’ve got to be bad at it. And before you can be bad at it, you have to go out there and try. The short version is the more you put into doing this and learning about it, the more you are going to get out of it.”

DeWitt has always known about mock scrapes, but “years of aggravation” finally led him to get serious about them around 10 years ago when he was motivated to develop his own “Cuzz’s Cooter Juice.”

“I met an old man at an archery trade show who told me synthetics were going to be the future of scents,” he said. “I investigated it and started working on a blend that I knew would work, because I tested it over and over again in the deer woods, I started giving it to others, and they found out how good it was and told me I needed to start selling it. So I did. I’m not in it to make a bucket of money. I just want to help people enjoy deer hunting more and be more successful.”

If Dan DeWitt’s success hunting deer along mock scrape lines isn’t enough to prove it works, dozens of photos from his trail cameras offer proof positive — and not just pictures of deer, but also of bobcats, coyotes and foxes.

“If you know the outdoors, you know that nothing is more scent-wary than a bobcat or a fox,” he said. “If Cooter Juice can fool them into walking the exact line you’ve laid out for the deer, then it can fool any deer. Case closed.”

Every deer is a trophy deer

There are folks who won’t agree, but Dan DeWitt values deer hunting simply for the experience of being outdoors and the goodness of a useful harvest. “In my opinion, every deer you kill is a trophy deer,” he said. “You spend time preparing and hunting, and you go into the deer’s territory. Whether it is a big, old doe or a 6-point buck, it can be a trophy to you. It doesn’t have to be a Boone & Crockett. “It’s real simple. When you are blessed with a harvest, fill your freezer with God-given fresh meat and you have met your expectation, it’s a trophy. Thank the good Lord for your harvest. If that’s a heartfelt blessing, then that is what it is all about.”

Dan DeWitt isn’t just your ordinary, weekend outdoorsman. He won’t tell you and doesn’t want to talk about it, but the quiet, humble Dry Prong resident is a legend: a member of the inaugural class of the Louisiana Legends of the Outdoors Hall of Fame.

He has been a professional outfitter and guide for more than 35 years, leading hunters on trips across the globe for deer, turkey, elk, hogs and exotic game. He has been featured on numerous hunting television shows and has taken more than 150 people on their first successful hunts. He directed for 17 years a youth outdoor summer camp and founded Preachers Need Friends, Too, a ministry to carry preachers hunting to help give them rest and relaxation away from their ministries.

When it comes to crossbows, faster isn’t always better. […]