Patrick Kennedy has been going on hunting trips, he estimates, since he learned to walk, and he scored his first deer at the age of 11. But this one would be different.

A monster of a deer stood before him. Kennedy took aim, and the shot was perfect – well, almost perfect.

“That shot had everything it needed but a bullet,” Kennedy said with a chuckle.

Indeed, he’d neglected to load his gun after taking off its scope caps. But the deer was still in range, and the second shot was true, a 7 mm magnum finding its target 285 yards away, and making a day of hunting in Red River Parish worth it and then some.

“It’s by far the biggest I’ve taken,” said Kennedy, who hasn’t had the deer officially scored, but estimated it to be approximately a 13-point trophy deer. “A deer like that … it’s pretty rare because typically in that area, the rut (of the season) is Thanksgiving week. This was Nov. 2. He just kind of wandered out there.”

There was a reason for that, it appears. Shortly after he took down the deer, two others emerged from the woods, one of them a doe.

“I saw the doe come from the thicket, being chased by another trophy deer,” Kennedy said. “I know someone might hear that and say, ‘Well, two deer running off together after a shot doesn’t mean one was chasing the other. But I’ve spent my share of hours in a deer stand and I’ll say, without a doubt, that buck was on a mission.”

A blessing in disguise

The buck Kennedy shot had been photographed for months, but seeing it up close was a different experience altogether. When Kennedy recognized it from the photos, his heart may have skipped a beat or two, he said.

In fact, his early misfire may have been a good thing in hindsight, he believes.

“To be honest, I’d have probably missed,” Kennedy said. “For the last couple of years, it’s actually kind of been a problem for me. It hits me too soon and I get too worked up. I just told myself, ‘Do not look at his rack.’ Don’t look at the antlers, whatever you do, because if you do, you’ll lose your cool.”

He kept his composure, until he landed the shot, of course.

“Oh, it was heart attack city when I got him,” Kennedy said. “A deer of that caliber is something I’m not used to seeing. It was almost like, pinch me, is this a dream? It was crazy that I was even able to keep calm. I may have been kind of in shock, I guess.” 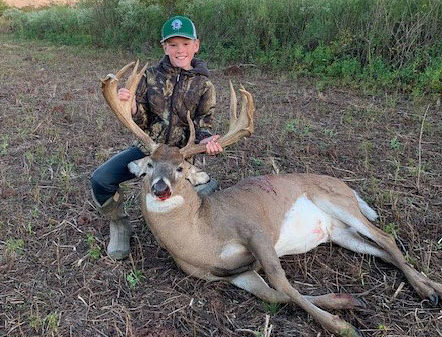 Kennedy was quick to credit his fellow hunters who were on the outing with him, including a particular shout out to his friend’s 10-year-old son, Mason, who was the first to point out the buck.

“You’re just grateful to have that opportunity in your life, and that you have friends who you hunt with … because you don’t just put yourself in those positions,” Kennedy said. “It’s always a team effort.”