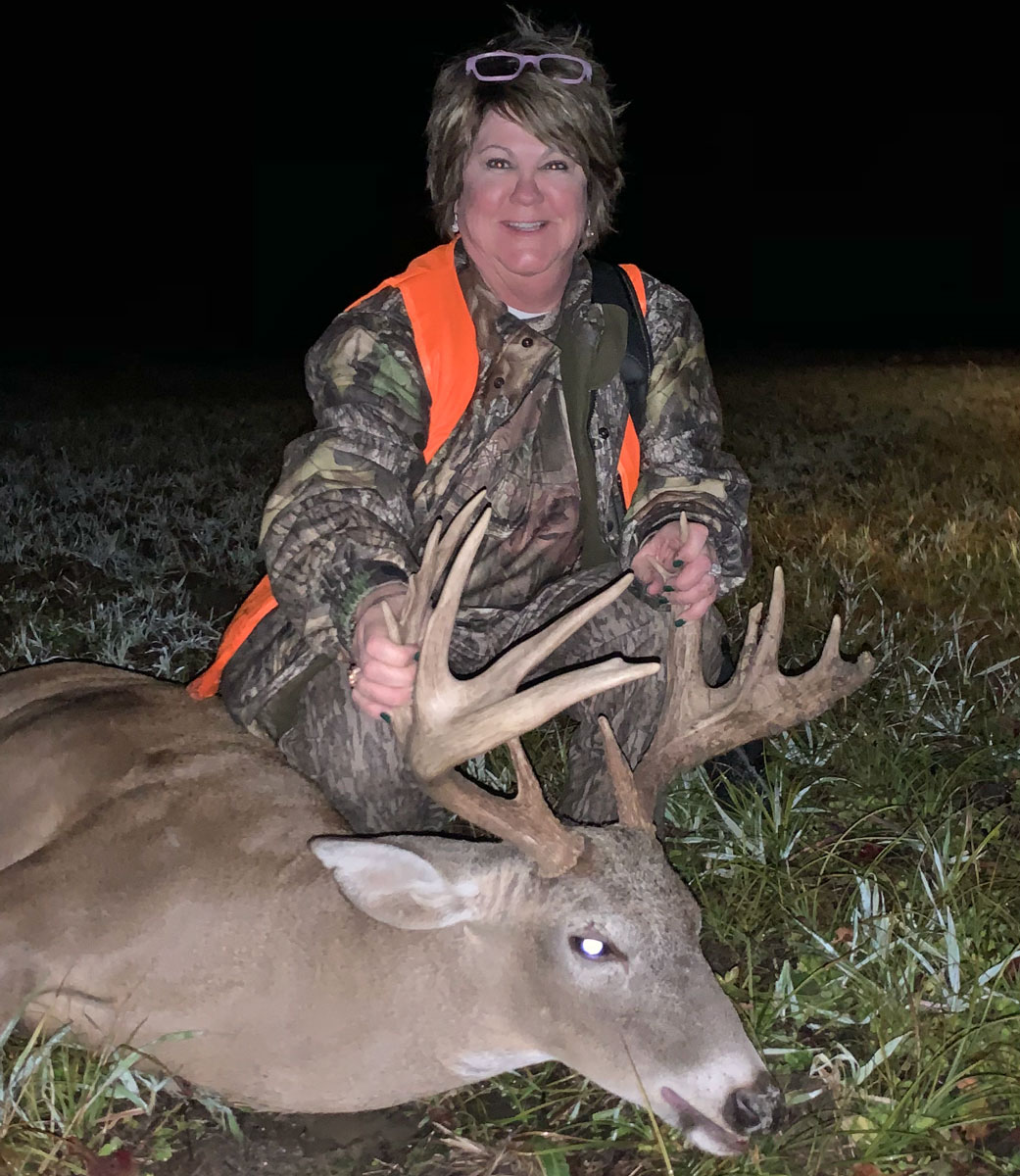 Melissa McKinley, a retired hair dresser who lives with her husband in Delhi, had a chance at a big buck on Dec. 12. However, there was a problem. Hunting on 600 acres of family land in Madison Parish, she knew the rules – be sure any buck you shoot is a mature animal; taking a young buck is taboo.

“I kept telling my husband I was afraid I had shot a buck too small,” McKinley said. “I was a nervous wreck until my husband held up the head of the buck I had just shot, looked at me and said ‘you just shot a 17-point buck’. You talk about feeling relief.”

McKinley had decided to try hunting alone in her nephew’s stand as she and her husband normally sit together.

“My nephew’s stand is one where most of the deer had been showing up and it was agreed that day that I would hunt that stand alone,” she said.

The stand overlooks a shooting lane with CRP land on each side of the lane allowing plenty of cover for deer to feel comfortable. A pile of corn had been placed in front of the stand. McKinley climbed into the box stand around 3:30 that afternoon and got settled in to see what might come out on the lane.

“My husband and I were facetiming when a doe came out of the thicket and began feeding on the corn. I was telling him about seeing the doe when all of a sudden, a buck walked out at 50 yards. I quickly told him ‘BUCK; BUCK; I GOTTA GO!’” she exclaimed.

For the next few seconds, she pondered if the buck was big enough to shoot. She recalled that a good buck had shown up on her nephew’s trail camera just one time and although she thought it could be this buck, she wasn’t sure.

“I got out my binoculars and studied the deer and called my husband,” she said. “You men can look at a deer and tell if it’s mature and since I was by myself I just wanted to be sure it was big enough to shoot. The buck was eating from the corn pile and paid no attention to the doe until he decided to run her off and then returned to the corn to eat some more.

“My husband and I were texting and he told me to do what I thought I ought to do, so I agreed. My husband had given me an early Christmas present, a Bergara .308 rifle, and I got it on the buck and shot. I couldn’t believe it when he dropped right there.”

Calling her husband and telling him what she had just shot, hoping it would stay down and not get up and run, he told her to stay put until he got there. The hour was getting late and with so many bears in the area, she had no interest in leaving the stand until her husband got there.

“When he got there, I told him to go look and see how big the buck was; I was still afraid I had messed up and shot one too small,” McKinley said. “He got to the buck, held the head up as I asked if it was big enough. He turned and looked at me and told me I had just shot a 17-point buck.”

Taking the buck to Cecil Reddick, official Buckmaster scorer, the rack measured 155 6/8 inches. Inside spread was 15 4/8 inches and was determined to be 6 ½ years old. It tipped the scales at 210 pounds.

Adding to her excitement, a few days later, she used her “early Christmas gift” to down a big-bodied 8-point that was estimated to weigh in the neighborhood of 300 pounds.

About Glynn Harris 406 Articles
Glynn Harris is a long-time outdoor writer from Ruston. He writes weekly outdoor columns for several north Louisiana newspapers, has magazine credits in a number of state and national magazines and broadcasts four outdoor radio broadcasts each week. He has won more than 50 writing and broadcasting awards during his 47 year career.