There is no shortage of kayak fishing tournaments available to challenge anglers and help them become better fishermen. However, some of the competitions are intense and somewhat intimidating, especially for those new to the kayak fishing scene.

While the vast majority of saltwater tournaments focus on trout, redfish and flounder, there are a few in locations with easy offshore access that step it up to include fish like red snapper, king mackerel, tuna and even sailfish Of course, freshwater tournaments generally concentrate on largemouth bass. There is no doubt that entering tournaments help you to become a better kayak angler.

In addition to popular inshore tournaments that feature awards for catching a Cajun Slam — trout, redfish and flounder — the Bayou Coast Kayak Fishing Club offers a unique event that allows members to challenge themselves to successfully catch a wide variety of different species. The BCKFC’s Master Angler program is a tiered, friendly competition whereby members achieve graduating levels of accomplishment based on the number of qualifying different species they catch and enter.

Entries are electronically submitted to the program committee for approval via the club’s web-forum. Once a qualifying species is caught, there is no need to pursue a bigger member of the same species. However, the club plans to add a list of club records, so anglers can submit subsequent catches if they are longer than the current longest fish in a particular species.

There is no entry fee, but participants must be a club member in good standing at the time of their catch and entry. No prizes are awarded, except the satisfaction and bragging rights that come with climbing each level of the chart on the way to achieving Master Angler status and perhaps even the title of Ultimate Angler. There are plans underway to allow participants to purchase shirts or hats to designate their accomplishment as a Master Angler.

The tiers start off slowly, requiring only three qualifying species to earn the designation of Advanced Angler. Add a few more species (five to six), and those kayak anglers move up to the rank of Expert Angler. Any member catching seven to nine different species rises to the rank of Elite Angler. To reach the coveted title of Master Angler, participants must have entered a minimum of 10 qualifying species. Beyond that, the club designates the member with the highest total number of different species as the club’s Ultimate Angler. That title is continuously held until another member surpasses that total. 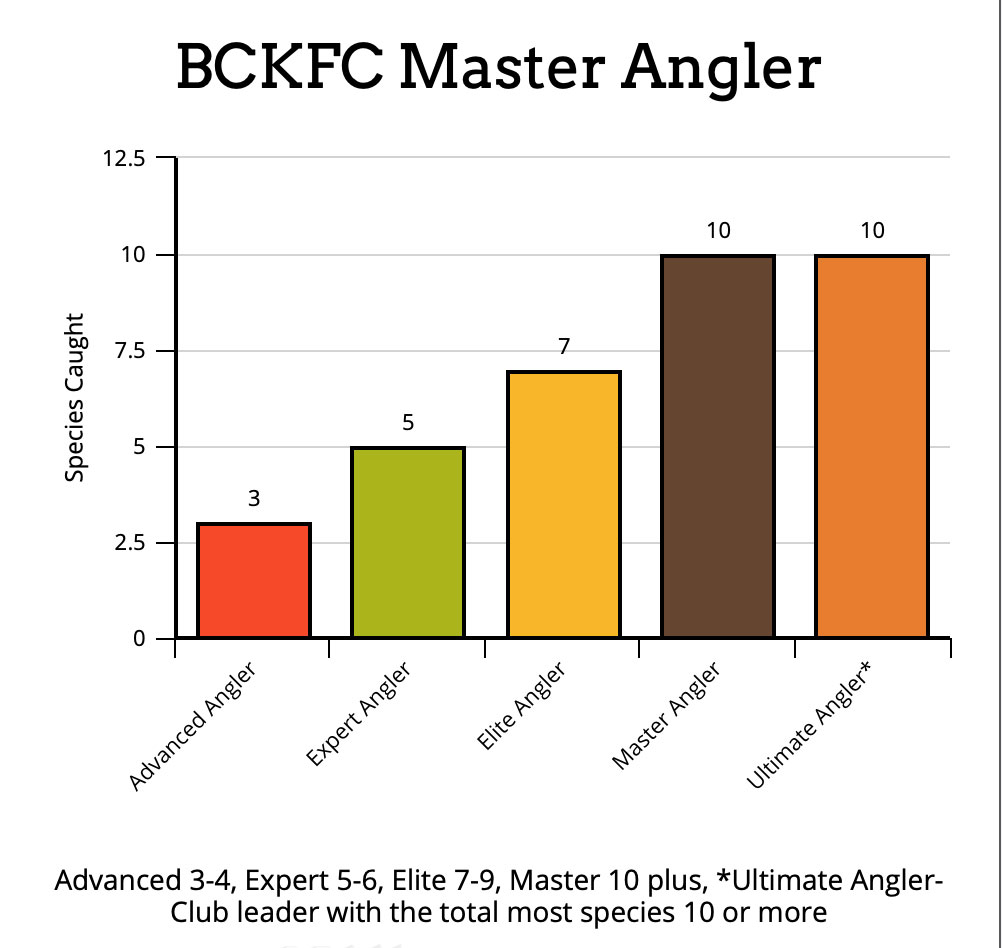 Entries are limited to fish caught in United States waters and must be caught in a kayak without the use of a mother ship. The current list of qualifying species contains 30 saltwater and 25 freshwater fish. However, participants may submit one “other” species per year for consideration by the program officials. If the unlisted species is deemed sufficient to qualify for the program, the angler is given credit for an additional species. Suggestions are also welcomed for potentially adding additional species/qualifying lengths to the permanent qualifying list.

There is no catch-and-release requirement, but photographs must contain the fish, the angler’s kayak and a common measuring device. However, recognizing that states have varying laws, the committee can make exceptions to allow entry for certain unique situations. For example, the minimum qualifying length for a tarpon is 24 inches. However, Florida law prohibits removal of any tarpon 40 inches or longer completely from the water. Therefore, the program committee reserves the right to make judgment calls on acceptance if an angler submits a photo of a tarpon landed along side of the kayak. Likewise, it is not advisable to bring some large, dangerous species onto the kayak, such as sharks or barracuda. Therefore, the committee can allow entry as long as there is good photographic proof of the catch, which appears to reasonably meet the minimum length requirement.

The BCKFC Master Angler program is as much about challenging yourself as it is a friendly competition amongst fellow club members. Each time a new qualifying species is caught, the kayak angler gains additional experience and confidence. The program also encourages branching out of one’s comfort zone to pursue different species and learn new techniques. To learn more about the Master Angler program, join BCKFC and see the current stats, go to: www.bckfc.org.

About Chris Holmes 233 Articles
Chris Holmes has kayak fished in the Gulf of Mexico, the Atlantic and Pacific oceans and many places in between.