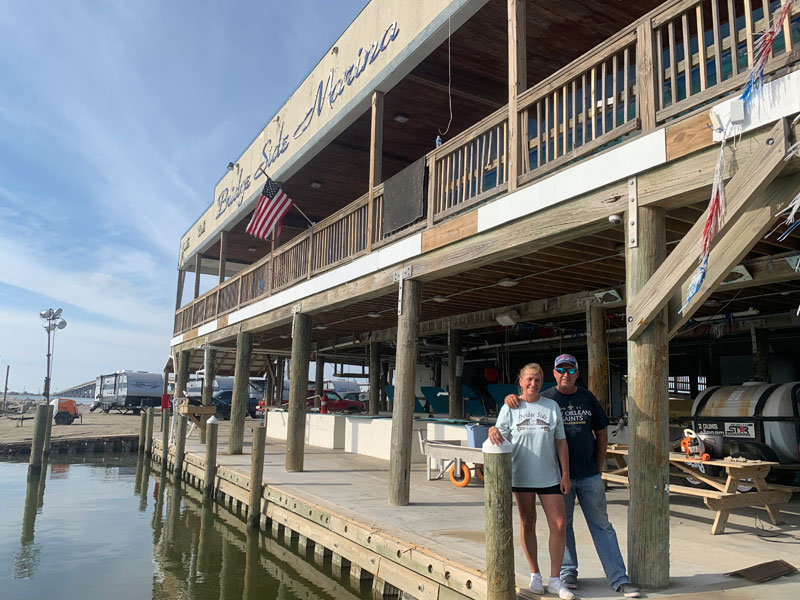 Nestled at the foot of Louisiana’s historic Highway 1 lies a small, close-knit community of nearly 1,500 residents.

Those lucky enough to have visited Grand Isle in recent years have a collective pang in their hearts due to the incredible damage caused by Hurricane Ida across the 7-mile-long barrier island and surrounding areas.

Those lucky enough to have visited Grand Isle in recent years have a collective pang in their hearts due to the incredible damage caused by Hurricane Ida across the 7-mile-long barrier island and surrounding areas.

Each hurricane season brings the fear of the unknown to Grand Isle, but the fight outweighs the concern. Mother Nature fought hard; Grand Isle will fight harder.

“As long as there is one grain of sand on Grand Isle, we are going to plant the American flag,” said David Camadelle, the town’s mayor. “We are not going anywhere.”

Since meteorologists began predicting, recording and archiving tropical storms in the 1870s, Grand Isle has been pummeled by more than two-dozen numbered and named storms. Each time, the island has survived, building smarter, stronger and sturdier structures.

Hurricane Ida’s arrival on Aug. 29 as a Category 4 storm is no exception. The island is abuzz with the hum of machinery, the rumble of engines, the shouts of workers and sadly, the moans of residents and business owners. Restoration has already begun for some; for others, they are still lost in the confusing maze of navigating the insurance process.

Dodie and Buggie Vegas are somewhere in between. Owners of the iconic Bridgeside Marina, they have suffered enormous losses over the past few months. The family matriarch, Elnora Gaspard, passed away 5 weeks before Ida made landfall, making storm preparations more difficult for the family. Jodie Vegas, Gaspard’s daughter, was “numb” about evacuating; after all, Bridgeside is more than the family business, it is a physical reminder of her parents’ hard work and commitment to the community.

The family has owned Bridgeside since 1976, seeing its share of threatening storms and weighing the risks of remaining on the island or evacuating several times. Usually, they remain, but with Ida predicted to be a catastrophic storm, they packed what they could and evacuated to Cut Off, about 35 miles northwest of Grand Isle.

The family is taking the rebuilding process one day at a time.

“We, of course, want to fix everything right now, but we have had a lot of hard decisions to make as a family,” Dodie Vegas said, mentioning the lack of insurance on the piers that have provided families many happy fishing experiences, fish cleaning stations that bring anglers and spectators a sense of camaraderie, and of course the docks and over-the-water- infrastructure that provide customers the ability to gas-up their boat, purchase bait, load up their coolers with ice and drinks, browse the store’s shelves and fill their bellies with delicacies from the Bridgeside kitchen.

“But just like when Katrina hit us hard in 2005, in 2006, we picked up the sticks and had some amazing years ’till now. So, I guess what we as a family will do, is do it again. It just might take a little longer.

“We absolutely love our customers. They have become family to us. We believe it’s a mutual feeling. We want to keep Bridgeside going, but there is so much that we need help with.”

The temporary closure of Bridgeside Marina has not only affected the Gaspard and Vegas families, it has also pained several snowbirds of the human variety, who eagerly awaited their migration to Grand Isle this coming winter. Before Ida, Bridgeside’s campground played host to dozens of these families; some who have made Grand Isle an annual pilgrimage for decades.

“The campground was completely wiped out,” said Dodie Vegas who will miss meeting and welcoming the snowbirds’ new guests, since many bring someone new each year, like a cousin, next-door-neighbor or friend.

Like the campground, the marina’s motel and cabins were also destroyed. Andy Porter, 64, a marina employee, chose not to evacuate during Ida, taking refuge in a motel room. When the storm proved to be more of a formidable opponent than he could handle, Porter sought safety in the motel’s laundry room, hiding under a pinball machine.

All the while, the Vegas family prayed for his safety. Because they were feeling the storm’s wrath in Cut Off, they could not fathom what Porter was experiencing — or even whether he had survived.

When the storm had passed, Porter sent Dodie Vegas a photograph of the devastation taken from the porch of the late Elnora Gaspard’s residence that flanked the laundry room.

The sight was bittersweet. The photograph meant that Andy survived, but it also meant much of the campus did not. The photograph was the last contact the Vegas family had with Porter until a customer took photographs from his helicopter, one showing Porter standing on the motel’s porch. The porch was standing; Porter was standing; the motel was not.

As survivors, Porter and the Vegas family are working diligently to bring Riverside back to life, but for many, progress is slow. Insurance payouts will partially restore the marina and its accommodations, but it will take time.

The Vegas family is not going down without a fight.

“We are here for whatever hurricane decides to come along and take stuff away, cause that’s all it is — is stuff. We have our health, our families, and friends. What more could you ask for?” Dodie Vegas said.

After 45 years, Bridgeside is an icon of Grand Isle. It was the brainchild of the Robichaux family, who gave Dudley Gaspard, a barber and the town’s school bus driver, and Elnora Gaspard, the motel’s caretaker, the opportunity to take over ownership of the marina. The Gaspards accepted and developed the marina into what is was and will be again.

Grand Isle and the devastated communities along Ida’s path need help. Consider it a small price to pay for living so close to paradise. Select a non-profit that provides direct assistance to those in need. Donate your time, talents and funds. Perhaps sponsor a displaced family this holiday season. But most of all, patronize the businesses that were so devastated by Hurricane Ida. What you give will be returned ten-fold.

The sense of community and hospitality bestowed upon the Bayou, River, and Coastal parishes of south Louisiana, is no doubt what contributed to Grand Isle’s placement in the New York Times’ annual list of places to go in 2020. Camardelle is grateful for this recognition. He hopes that the accolade will continue to bring attention to Grand Isles’ plight and fight.