Recent research from the Louisiana Department of Wildlife and Fisheries shows there’s been a substantial decline in population samples and recreational landings of speckled trout 3 years or older. Fisheries managers are still shoring up the numbers, but the drastic increase of high fishing mortality on Louisiana speckled trout populations is alarming.

The good news is that speckled trout in general are prolific spawners, producing millions of eggs each year, which is why the species can recover very quickly under the right conditions.

Research in Texas and Georgia shows that older, female trout may drop as many as 10 times more eggs than younger females on an annual basis. And as trout are “multiple spawners” — spawning eight to 11 times during the season which spans from April to October in Louisiana waters — that difference is greatly magnified.

Also, older females may spawn more frequently than younger ones.*

When do trout spawn?

According to research, the speckled trout spawn peaks in midsummer, July and August, in the middle of the spawning season.

Unfortunately, the LDWF did not report on the number of viable eggs an individual female trout delivers, saying that the results were inconsistent. 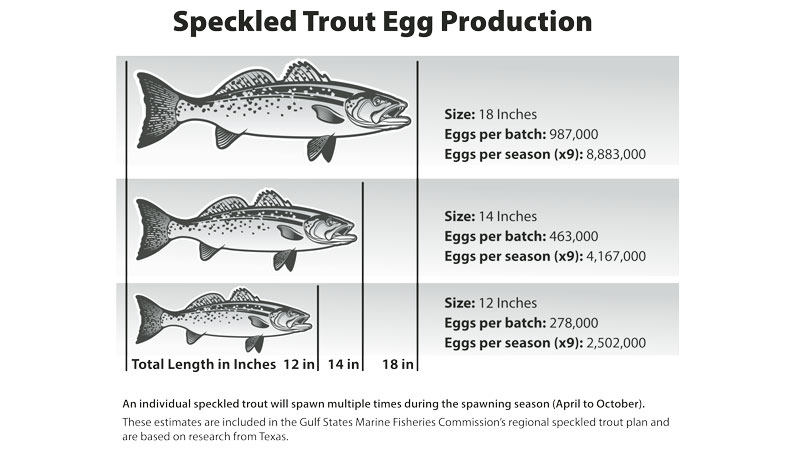 Egg numbers based on Texas research

The number of eggs continues to increase exponentially with size and then begins to decline as a trout reaches “old age” of 5 to 7 years. 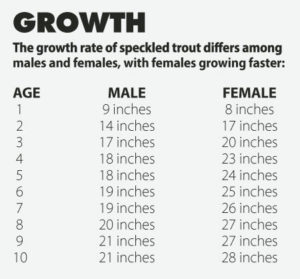 The figures presented below are somewhat conservative estimates of numbers of eggs per spawn for different-sized trout based on the Texas data. Also, batch sizes produced by speckled trout have also been shown to be particularly individualistic and vary even in the same waters. Environmental conditions such as salinity levels also affect numbers of viable eggs per batch.

In the state of Georgia, anglers are asked to voluntarily release speckled trout over 18 inches to increase the recruitment of trout along the Atlantic coast. The program is called “Speckled Trout R.O.E.” – a handy acronym for “Release Over Eighteen.”

In response to the significant drop of older trout in Louisiana waters, the LDWF could influence recruitment by extending length limits and/or placing a limit of how many trout may be kept over a specified length in 2020.

Anglers in Louisiana may also voluntarily release trout over 18 inches on their own accord in an effort to increase spawning stock biomass.

* Much of the information in this article was taken from: “The Spotted Seatrout Fishery of the Gulf of Mexico, United States: A Regional Management Plan,” Gulf States Marine Fisheries Commission, Commission, March 2001).

Charter Captain Ron Broadus, aka, “Captain Ahab,” said this is shaping up to be the best May Delacroix Island has seen in years. […]

For even for the best anglers, targeting trophy trout takes time, determination, perseverance, skill and more than a smidgen of luck. […]