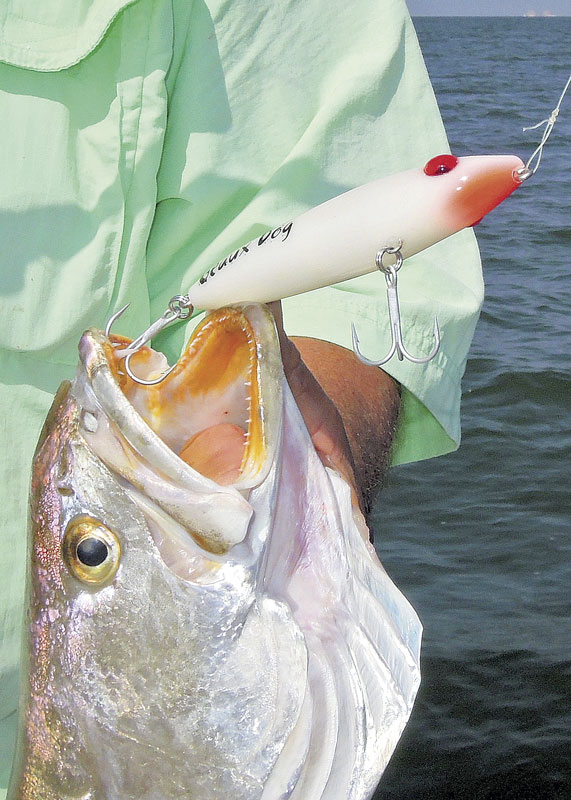 Intentionally target big trout and that’s what you’ll get!

Doing the piscatorial version of “the wave,” thousands of terrified pogies desperately leaped from the water in a futile effort to escape the ravaging predators slashing at them at the edge of the light.

On a dock protruding into Calcasieu Lake near Lake Charles, La., we quickly tied on large shad-colored lipless crankbaits and tossed them just in front of the leading edge of the “wave” as it arched back and forth around the dock tip. The heavy rattling temptations barely touched the water before large fish inhaled them. For hours, we landed speckled trout in the 6 to 9-pound range, plus large redfish.

I offer myself as proof that anyone can catch a trophy trout if that person happens upon the right spot at the right time with the right bait. I will probably never again experience such incredible fishing as that night.

People who consistently catch giant specks intentionally fish for them.

For even for the best anglers, targeting trophy trout takes time, determination, perseverance, skill and more than a smidgen of luck. Targeting big trout also requires a plan beginning even before the boat leaves the dock. Anglers specifically fishing for monster specks might spend long hours casting hundreds of times while hoping for one or two bites while ignoring people in nearby boats landing limits of small specks.

“Someone who wants to catch big trout consistently has to fish for one big bite,” commented Kirk Stansel of Hackberry Rod and Gun (888-762-3391, Hackberryrodandgun.com) on Calcasieu Lake, locally called Big Lake. “Before we leave the dock, we have to decide to target big fish or a lot of small fish. Sometimes, fishing for giant speckled trout is about as exciting as watching ice melt. It can be pretty slow when looking for that one big strike — until one hits!”

Simply put, few trout ever grow to true trophy classes. One large female speck might produce millions of eggs in a year, but only a small percentage live to spawn. A 3-year-old female speck might measure about 17 inches long. Not many trout make it past three years. Any trout exceeding eight pounds makes an incredibly rare trophy, even more so for a double-digit wall hanger.

“The best advice I can give to anyone who wants to catch big trout is to look for shallow water, bait and areas with high salinity levels,” advised Nash Roberts IV with Fishunter Guide Service (504-650-1918, fishunter-guideservice.com) who fishes the Port Sulphur, La., area. “We catch our bigger trout usually in water less than three feet deep. We find many big trout feeding on fish above oyster reefs.”

Specks require salinity levels of at least 17 parts per thousand to spawn. Before spawning, trout reach their largest sizes. Specks typically start spawning in April and might spawn multiple times until early fall. The peak occurs from mid-May through June with a smaller peak in August.

In many ways, giant specks often act more like redfish or largemouth bass than small trout. Habitual loners, they lurk around cover such as oyster reefs, rock piles, sunken boats, jetties, petroleum wells or other hard structures where they can ambush baitfish rather than running down prey in the open.

Any trout will slurp a shrimp that passes temptingly close, but monster trout don’t feed very often and characteristically want one big meal they can grab without expending too much energy to catch it. That means a fish meal instead of a bite-size shrimp. A 5-pound trout can easily swallow a 12-inch mullet. Imagine what a 10-pound trout might gulp!

“Big trout eat much bigger baits than most people realize,” explained Ronnie Daniels of Fisher-Man Guide Services (228-323-1115, msfisher-man.com) in Pass Christian, Miss. “The tenacity of these fish is impressive. I’ve caught small trout with a bait almost as long as the speck. If they think they can swallow it, they’re going to try. We pull big fish out of trout bellies all the time when cleaning them. Almost every trout we clean in the summer, unless we catch them under birds, have pogies in them.”

The biggest trout primarily feed upon mullets, croakers, pinfish, large pogies, also called menhaden, and other baitfish. Big trout won’t school with smaller specks attacking shrimp, but they might hover under the school waiting to pick off small trout. When big trout gather, they do so with other similar-sized trout and even redfish.

“I’ve caught many trout exceeding seven pounds around redfish schools,” Stansel recalled. “When redfish are schooling along the shorelines, big trout hang on the outside edges of those fish. They are feeding on the same bait.”

Anglers commonly see mullets and other baitfish swimming near the surface. Mullets regularly thrust their noses above the water. Therefore, large topwater baits make excellent temptations for the biggest trout.

“Large topwaters are some of the best baits for catching big trout,” Stansel said. “Finfish imitations, like mullet or pogies, attract the biggest fish. My favorite topwater bait is a Super Spook in gold with an orange belly and black back. I also like suspending jerkbaits. A MirrOdine suspending twitchbait is another good one for big trout. I also like the Corky Fat Boy, which is one my favorites.”

Anglers can also catch big trout on jigheads tipped with large plastic trailers or swimbaits. Some swimbaits even look like natural prey trout would eat. Spinnerbaits, spoons and crankbaits can also work on big trout.

“When I’m targeting something big, I use a Matrix Mega Shad, which is a big soft-plastic bait, on a ¼-ounce jighead,” Roberts said. “In cleaner water, I use subtle, natural colors. In dirty water, I like black and chartreuse. For really big trout, I also like Mike Herrmann’s Donkey Bay Swimbaits. These are all hand-painted. Some look identical to a pogie or a mullet and work great for big trout and other species. Work it almost like a walk-the-dog bait, but underwater so they glide from side to side. Just twitch it and fish come up to grab it.”

If large trout savor big baitfish, give them what they want. Mullets, croakers and pogies make excellent live baits. Fish them on a free line with no weight, under a popping cork or on bottom with a Carolina rig. Offer trout various live temptations at different depths.

“I like pogies up to about four inches long,” Nash said. “I hook the baitfish through its dorsal fin or nose and fish it on a free line with no weight. We use 20-pound braid with 36 inches of 20-pound fluorocarbon leader. We’ll use croakers occasionally, but I’ve had better success with pogies. A pogie gives off oil and it’s a natural prey for trout.”

Daniels fishes croakers with something called a “chatter weight.” The plastic weight comes with internal beads that rattle. Tie the main line to one end of a chatter weight and a fluorocarbon leader to the other. Add a 3/0 or 4/0 Kahle hook when using large croakers or a 1/0 to 2/0 Kahle hook with smaller baits.

“When fishing grass beds, I like to use lighter tackle,” Daniels said. “A chatter weight is just heavy enough to get the croaker below the surface so seagulls won’t grab it, but it doesn’t pin the bait to the bottom. Water clarity determines my leader. In relatively clear water, I use an 18-inch 20-pound-test fluorocarbon leader. Sometimes, I use 30-pound monofilament.”

When fishing live baits, most people instinctively set the hook as soon as they feel a bite. After attacking a fish, a trout must position it in its mouth to swallow it head first so the fins fold down. Fish with a slack line to allow the trout to get the bait. When it takes the slack out of the line and starts swimming off, use a low, sweeping motion to set the hook.

Whether fishing artificial or natural baits, keep quiet when targeting spooky giant trout. Shut down the outboard well away from the fishing spot. If possible, drift into the honey hole. Use the trolling motor sparingly for directional control. Make the longest casts possible. For even stealthier operations, many anglers prefer wading where possible to make a low profile on the surface.

Catching trophy trout takes extreme perseverance waiting for one big strike. However, any strike could produce the trout of a lifetime!

Head to the islands for the biggest specks

In late spring, trout exit the warming estuaries and head for deeper water in the Mississippi Sound. Several barrier islands provide grassy flats, sandbars, oyster reefs and other places that hold trout. Many anglers wade the beaches of the barrier islands and throw topwaters, but others prefer live bait.

“Cat Island, Ship Island and Horn Island are great places to fish,” Ronnie Daniels said. “They have grass beds and flats that hold trout. It’s not uncommon to catch 5- or 6-pound fish around the islands. For big trout, 2-to 3- inch live croakers are ideal for fishing the barrier islands. I’ve caught trout on 5-inch croakers before.”

In addition, anglers without boats can fish all along the Mississippi Coast beaches by wading and tossing baits to such cover as old dock pilings, piers and rainwater drains. The drains make small channels that hold bait and trout. The state also established numerous artificial reefs along the coast including some fairly close to shore where kayak or wading fishermen can tempt big trout.

About John Felsher 23 Articles
John N. Felsher is a professional freelance writer and photographer with more than 1,700 articles in more than 117 magazines to his credit.