My son and I decided to make a run to Delacroix on Saturday, Aug. 10. We got an early start by launching right at daylight from Serigne’s Boat Launch. After idling through the No Wake Zone, we ran the surface drive for 10-15 minutes into the marsh between Bayou Lery and Lost Lake.

The early bite on the southwest side of Bayou Lery was on soft swimbaits and topwater. Bass and reds were staged up on a single grass-covered point. By 7:30 we had several keepers and a lone flounder. Whooper Poppers and green cocahoe with a chartreuse tail on a quarter (1/4) ounce lead head did the trick.

The wind picked up a bit, so we moved toward the interior ponds. Fishing points, whether weed points or structural points, was very effective. Texas-rigged green and black swim-tail worms and the same swimbaits (green and chartreuse) got a lot of attention. 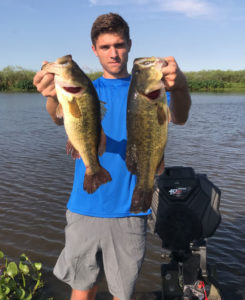 There was a lot of grass and weeds on the ponds and along the banks. We worked baits parallel to the weed lines. The key to finding fish was finding drop offs and pockets of water 2 feet deep or better.

By 9 a.m. the tide started moving. Between the wind-driven current and tidal movement, the fish really turned on. We found a well-defined cut between ponds in 4-5 feet of water and the fish were stacked up. We caught 10-15 reds and bass, as well as several perch and a flounder out of a relatively small area in about 45 minutes. They wanted that green and black worm sitting still on the bottom.

When that action slowed down, we started fishing points again. We picked up several more fish before we had to pick up. We were back home in St. Amant for 1:15 that afternoon. 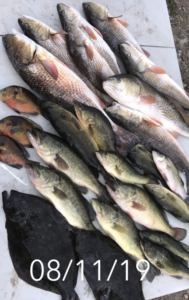 Delacroix is easily accessible and there are not too many other places where you can catch reds, bass, flounder and perch in the same fishing hole.

About the author: John H Smith is an experienced trial attorney. Growing up in Houma, Louisiana, molded an avid outdoorsman. He now lives in St. Amant and works out of his office in Baton Rouge. A personal injury attorney, John’s law firm has a superlative record representing those requiring legal assistance, redressing any number of civil wrongs committed against their life, limb or property. Visit www.smithshanklin.com to learn more.

About John Smith 6 Articles
John H. Smith is an experienced attorney. Growing up in Houma molded an avid outdoorsman. He lives in St. Amant and works out of his office in Baton Rouge. John’s law firm has a superlative record representing those requiring legal assistance, redressing any number of civil wrongs committed against their life, limb or property. His website is www.smithshanklin.com.