Few places along Louisiana’s coast can be considered truly remote these days.

Modern outboard motors are reliable and efficient and bass and bay boats are fast enough to make any body of water accessible.

Finding a place to fish where there aren’t a half dozen boats piled on a productive oyster reef or point or pounding the same shoreline is difficult.

But Capt. Lloyd Landry has spent the last four years exploring and learning an area where, most days, he’s got the place to himself. Four League Bay, near the mouth of the Atchafalaya River, has become one of his favorite places to fish despite it being square in the middle of no man’s land.

“The reason I go there is simple, the fish just don’t get pressured,” the veteran Louisiana trout and redfish guide said. “Every so often I see some friendly crabbers and shrimpers but usually I have the place to myself.”

Four League Bay isn’t close to any boat launch or coastal community. The western-most jumping off spots in Terrebonne Parish like Dularge, where Landry calls home these days, and Gibson, are a good 45-minute or hour-long boat ride from Four League Bay.

Leaving from Morgan City or Amelia and traveling down the Atchafalaya River is just as long of a boat ride.

The lengthy stretches holding a steering wheel instead of a fishing rod plus the reality that sediment-rich, freshwater from the Atchafalaya and adjacent Wax Lake Delta can turn large swaths of Four League Bay into a brown soup from the late winter through early summer can give even the most adventurous angler pause and reason to fish closer to the launch.

Landry said it’s the dirty water and the fact it scares most others away that attracted him to the area when he moved his guide business from Buras and the lower Mississippi River four years ago and settled in Dularge.

“I grew up and spent 20-plus years guiding in an area that got a ton of freshwater from the Mississippi River and I had to learn to adjust to it,” he said. “I consider myself a river fisherman. So, I wasn’t scared about heading to another area that gets dirty water and sediment to look for fish.”

While the seasonal freshwater inundation is similar to what anglers find along the edges of Black Bay and Breton Sound on the east side of the Mississippi River, Landry said Four League Bay isn’t an apples-to-apples comparison to his former home waters.

“Out of Buras, I had days where you could find a point or a pond and just sit there for hours and catch redfish, but I haven’t found spots exactly like that in Four League,” he said. “What I have found is miles and miles of shorelines and plenty of ponds and bayou banks that just don’t get fished hard and the redfish are fat and healthy and very aggressive. While I haven’t found those spots where you sit on one point and catch 50, if I hit two or three shorelines, I am usually catching fish consistently as I move along.”

His favorite way to approach fishing Four League is to pick an indentation or a drain along the eastern shoreline and throw spinnerbaits and soft plastics under a popping cork. Generally, it’s not long before he finds a few fish. Because the water is often dirty, it helps to use Berkley Gulp or other scented baits or tip baits with some shrimp to add flavor. Opaque colors like glow, chartreuse, black and chartreuse and purple and chartreuse are go-to colors for Landry in the area because they stand out better in the dirty water. 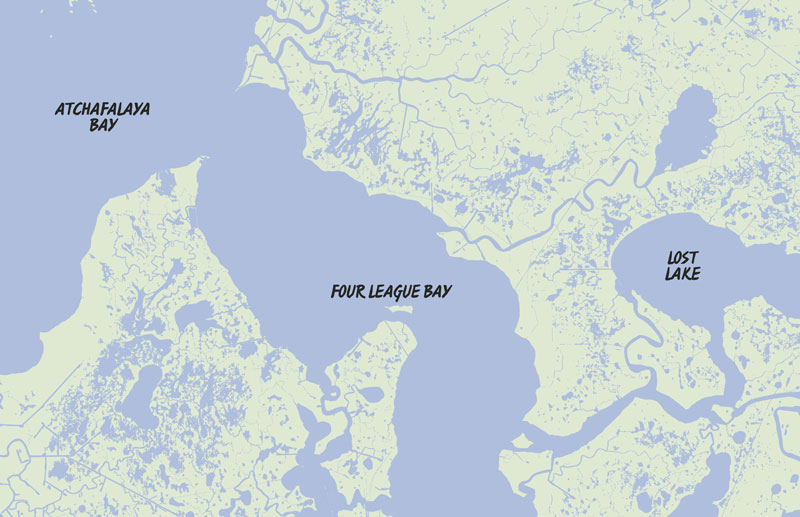 Adjacent areas like Old Oyster Bayou Lake, Fiddlers Lake, Bay Junop, Bay Castagnier and the bayous and ponds in between can be productive as well and offer a little more protection on the windiest days.

While the marsh in eastern Terrebonne Parish, and most other places along Louisiana’s coast, is fragmented, broken and scarred from decades of subsidence, erosion and ravaging hurricane winds and storm surges, the annual sediment flows from the Atchafalaya River have kept the shorelines and wetlands around Four League Bay intact.

Ponds and shallow bays in the area are also usually full of submerged vegetation teeming with crabs, small shrimp and mullet, making them attractive to redfish but also difficult to fish for inexperienced anglers.

Capt. Travis Miller calls Dularge home as well. He said he doesn’t spend as much time plying Four League Bay, Oyster Bayou and other adjacent waterways as he does the marshes and lakes closer to port, but he likes to make the long boat ride when his customers want a unique experience and he isn’t hemmed in by having to be back at the dock early.

“Some folks who come to fish with me just don’t want to take a 45-minute boat ride to catch redfish,” Miller said. “But when I can convince them to go that far, it’s usually worth it. I’ve had some incredible days along the shorelines by Lost Bayou and Carencro Bayou and along the eastern shoreline of Four League. The marsh in the far western parts of Terrebonne Parish is so fruitful and beautiful and intact. It’s not like most areas where you watch shorelines erode every year or lose islands. That area is solid and productive.”

Both guides said redfish are by far the primary target in Four League Bay because of their tolerance to freshwater and because they will eat a variety of forage including freshwater species like crawfish, shad and bluegill. Miller said Oyster Bayou, at the southern end of the bay, is one of the best places in the world to catch bull reds and giant black drum.

“We are lucky in Dularge to have so much marsh in all of that area around Lost Lake and Four League Bay,” Miller said. “It gives us places to fish when the wind is blowing too hard to trout fish in the summer and its awesome in the fall and winter. Cocodrie and areas east of Dularge have great trout fishing in the summer but they have nowhere to hide when the winds are up and they don’t have nearly the redfish we find out west.”

The speckled trout fishing in the area can also be excellent at certain times of the year, especially in the fall and winter when the Atchafalaya drops well below flood stage.

“The oyster reefs in the lower parts of the bay closer to Oyster Bayou and the Gulf of Mexico are loaded with trout at times,” Landry said “They aren’t always big fish and sometimes you have to pick through them to keep a few. But just like the redfish, they don’t get pressured in there. I’ve caught trout in those areas from October all the way through the following March and they’re feeding on huge schools of mullet, pogies and shrimp.”

Western Terrebonne’s marshes also offer excellent fishing for largemouth bass, sac-a-lait and a variety of other panfish as well as sheepshead, puppy drum and freshwater catfish. Stops along points, drains and grass beds north of Lost Lake and around Carencro Lake on the return trip to Dulac from Four League Bay can turn a world-class redfish trip into a great bass and sac-a-lait trip as well.

“I feel like I can fish the area adjacent to Four League Bay for 10 years and never come close to hitting all the fishy looking spots and, unlike other places east of Dularge, I feel confident the marsh by Four League will be around to explore for a long long time,” Landry said. “This year, I’m going to push it even farther west, see if I can find other areas near the Atchafalaya River that have big, healthy redfish that don’t see a lot of baits.”

Nancy Roy caught her first redfish near the Cameron jetties. […]