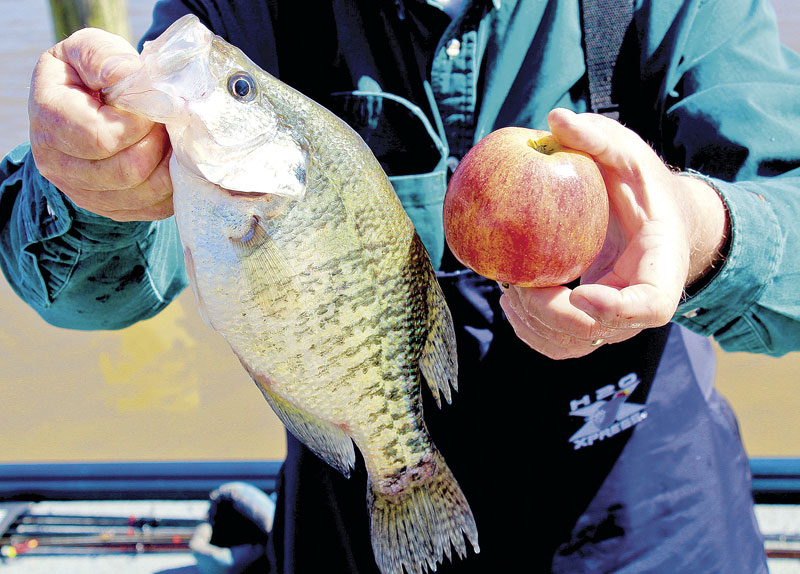 Unless you are a fan of groundhogs, there isn’t a lot exciting about February other than remembering Valentine’s Day. And if you forget it, it can really get exciting.

The weather is usually a little funky, but it’s a good time to get revved up for the coming fishing season. Charge your batteries. Get your gear in shape. Spend some time learning about the newest baits, techniques and hot fishing spots.

It’s also a good time to catch up on some old, tried and true lessons of fishing that you might have missed — like how to weigh crappie, lucky false fruit and how to energize your crickets.

It’s amazing, but all spring all crappie, sac-a-lait or white perch — whatever you call them — seem to weigh two pounds. Have you noticed that? Let’s go down to the lake and check.

Did you catch any?

“Yep. About a dozen two pounders.”

“Well, all but one. He got away. He weighed nearly three pounds.”

(I forgot to mention if a two pound crappie gets away, it weighs almost three pounds.)

There are crappie that occasionally show up that don’t weigh two pounds. Let’s ask someone else. Hey how about you. Catch any big ones?

“Naw, but we got some good eaters.”

Good eaters? Those weigh about a pound apiece, or maybe half a pound. But had they gotten away, they would have weighed two pounds. Never, ever, has a “good eater” gotten away.

I can’t say how far back this superstition goes, but at least among sport fishermen there exists a belief that bananas on a boat are unlucky. Usually this rumor takes the form of the fish not biting, but bananas can also cause mechanical breakdowns and other mishaps. Bananas have been known to make fishermen leave the plug out of their boat. Honest. Some in the fishing charter business don’t even allow snacks like dried banana chips or banana muffins. Even items bearing the word “banana” or anything evocative of it, like Fruit of the Loom underwear, Banana Republic apparel, and Banana Boat sunscreen can be trouble.

But there is hope. There is a lucky fishing fruit. Apples. Although to be perfectly scientific, apples are a “false fruit”. I don’t know why. I don’t care why.

Some lessons are easy to learn. I was out with a fishing buddy and fishing was kind of slow. He pulled a big red apple out of his lunch bag. Every time he took a bite, we caught a big crappie (all two pounders, by the way). One time he got excited grabbing the net for one of my many slab crappie and almost got choked.

I was talking about the apple, not the fish. He didn’t spit out the lucky apple. And the fish didn’t spit the bait. And we kept catching fish that day until he ate the last apple. Then the bite suddenly ended. It may be a mystery to some, but I know what it was.

Cooter Anderson is a legend on Lake D’Arbonne, mostly because of his nearly 50 years operating Cooter’s Bait & Tackle. Cooter has more stories and advice than Carter’s has liver pills. Some of you younger folks will just have to Google that to understand.

Cooter taught me that not all banana fishing applications are bad.

One day, I bought 100 crickets and six little orange and white styrofoam bream corks, which I just dropped in a red plastic cricket box so I wouldn’t misplace them. By the time I got ready to go fishing, the crickets had almost devoured the corks. I told Cooter about it and he reminded me to put lettuce leaves or small cut potatoes in there to provide food and water for the crickets. And they like to chew on stuff. He said as long as you feed them and keep them from freezing, they’ll stay healthy for a week or longer.

Then he let me in on a little cricket secret.

“I ran out of potatoes one day and had some overripe bananas,” he said. “I’ve got three thousand crickets in here, so I’ve got to keep them fed. I put those bananas in the cricket bin and the next morning they were gone, peelings and all. And the crickets were more lively than ever. I don’t know. They just seemed more chirpy than usual. I heard it when I came in the front door. I gave them more and they loved it.”

So February isn’t a total loss, no matter what that groundhog does, or if you get candy for Valentine’s Day. You now know how much your crappie weigh without using scales. You know to keep an apple or two in your boat cooler. And the tip of the day: Put ripe bananas in your cricket box. The crickets will be fat and chirpy. And that, according to Cooter, makes the bream go bananas!