Jiggin’ Pole’s inventor had plenty to say about crappie fishing, and his son is keeping the religion alive.

Trying to summarize all the sac-a-lait fishing knowledge that J.B. “Blaine” Salter Jr. accumulated over the years from his father,, the late J.B. Salter, and from time on the lake is like trying to summarize the entire Encyclopedia Brittanica — Remember those? — in two paragraphs or less.

Salter is driving forward the legacy of his father, who passed away four years ago, and their company, Salters Jiggin’ Pole, the same way they built the business and some of the best panfishing poles around in a modest shop in Erwinville. Salter’s two main products continue to be the Classic Fiberglass Jiggin’ Pole and the Elite Series Jiggin’ Pole.

The poles are still built so when they are held, the guides are on the side of the pole to keep it from contacting the line to maximize the feel for bites. They are also built with counterweight on the end of the rod to keep them perfectly balanced and easy to hold during a long day’s fishing.

“It’s an all-out war out there now,” said Salter, 44. “Years ago, there weren’t that many sac-a-lait — or crappie — fishermen. Now everybody’s out there sac-a-lait fishing. It’s tremendous. The sport has grown 26% each year the past four years, and it isn’t through yet. I combine what I have learned crappie fishing with teaching others how to be successful. That’s what I do. In fact, between running the business and teaching every chance I get, I do less fishing than ever.”

Even if he never wets another hook, which isn’t about to happen, Salter spends all the time he can teaching sac-a-lait fishing at tackle shows, store seminars and even as a guest instructor at Crappie University. All the while, he ensures Salter Jiggin’ Pole produces the same, dependable fishing poles that his father began more than 40 years ago when he invented the Salter’s Jiggin’ Pole in 1981.

What’s the most important factor that influence sac-a-lait and bream and your ability to catch them? Salter has a handwritten answer to that question on a worn, old piece of ruled tablet paper.

“Out of a thousand handwritten letters Dad wrote, there were 12 things he felt influenced fishing patterns, Salter said. “Whether you are a beginner or an advanced fishermen, pay attention to these, and you’ll catch more fish.”

It would take a book to share all that information, but Salter breaks down the most important three items on that list in more detail. They apply no matter where you fish.

“Know your area’s food source,” he said. “If there is no food, there are no sac-a-lait there. Most of our home area is as follows: minnows or shad are No. 1, followed by grass shrimp for grassy lakes, and tadpoles or crawfish. Your bait should mimic these at all cost. Use the chart to determine colors. They react to contrast; Bobby Garland tadpole style baits are great. Cajun Lures’ Slim Jimmy has great tail action for jigging vertically and grey ghost hair jigs like Crappie G mimic a shiner’s flash.”

Next in importance are water clarity and oxygen levels, Salter said. Do not fish black, clear water. This indicates lack of oxygen. You want water with that beautiful green tint that is rich in oxygen, perfect for jigging so you can get up close.

“Shade patterns is high on the list,” he says. “If you catch a feeding pattern twice a day, then great. You can catch them easily. The skill comes at other times. Shade is your best friend. They hide in the shade and are invisible and ambush their pray. Suspend your bait under a cork or work your jig in a swimming pattern. That’s crucial. This really shouldn’t even be called jigging because it’s really swimming. Swim that bait in a 6-inch pattern with a little wiggle at the stop. And I mean stop. Still. Give that fish a chance to get it, and he will.”

Another tip Salter picked up as absolute truth from his father was to fish between 10 a.m. and 3 p.m. The elder Salter fished four to five hours at least three times a week the 10 years before he passed on. He swore by the 10 a.m. to 3 p.m. time frame. He also created a color chart that is included with Salter products and that Salter hands out at his teaching appearances.

“That chart has withstood the test of time and if you follow it, you’ll catch fish,” he said. 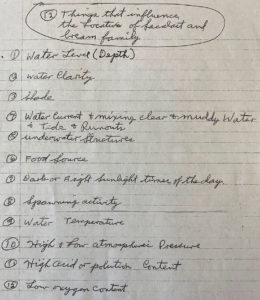 What influences the sac-a-lait and bream bite?

These are the 12 things that influence the location of sac-a-lait and bream, as copied exactly off a hand-written list from J.B. Salter. He swore by these as the most important factors in catching panfish and he used them religiously in his own fishing and teaching others.

Blaine Salter is adamant about doing things right when sac-a-lait fishing. One thing he swears by is to never fish naked — bare. No, he’s not talking about the fishermen. He’s talking about the hook on your lure. Never leave it bare.

“You can’t catch fish if you are hung up and if you are throwing the bait where you need to catch fish most of the time, you will get hung up unless you use a weed guard,” he says. “It’s the most vital part of every bait we use. Period. No, make that exclamation point.”

He designed the Salter’s Weed Guard, made of clear, soft-plastic polymer. It will make every jig in your box weedless, Blaine said. It’s made and distributed by Zachary Dubois of Cajun Lures in Kaplan.

“When hooked up right, it will allow you to put that jig right through tree roots, Christmas trees, grass beds … anything,” Blaine said. “It has a small hole in one end that you take your hook and go through that hole. Pull it up to the back of the jig head. If you are adding a plastic trailer, put it on and get it straight, then stick the other end of our weed guard right into the point of the hook. It also works on hair jigs. It’s weedless, but the bite and hookset will pull the point right through the plastic and stick the fish.”

There’s an instruction video on YouTube that features Blaine showing you exactly how to use one.