Want to try the kitchen sink? Here’s how to tie the rig that angler Jay Stone came up with to put the maximum number of baits in the right spots to catch suspended crappie.

“I start out with about 6 feet of line and tie a loop knot around one 1/16-ounce jighead, then go down about 11/2 feet and add another jig,” he said. “Then, repeat that twice about a foot-and-a-half lower until you have three jigs in tandem.

He finishes off the rig with soft plastics.

“I put a plastic curlytail jig on each one,” Stone said. “I like to use Kalin or Big Bite curlytails. They have good action; the tails spin at a slow speed, and they aren’t expensive.” 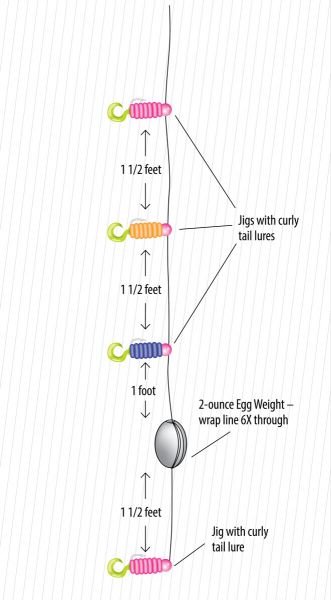 For this rig, Stone uses clear 10-pound line and attaches it to his main line with a snap swivel.

He uses 12-pound Hi-Vis line on his jigging reels so he can see it better. He uses clear line on the leader that’s tied to the jigs because some people think the crappie can see Hi Vis — and although he isn’t sure, Stone isn’t taking chances.

He fishes the rig on a B’n’M Duck Commander crappie trolling rod and B’n’M Pro Staff spinning reel with a 5.1:1 gear ratio.

He keeps different-colored jigs on each pole, and if one starts producing better, he ties on more of that color. Unlike many anglers, he does not use crappie bites.

“I’ve just got too many baits in the water to keep up,” he said. “It would just take too much time, and I like leaving the jig in the water.

“When you take the jig out of the water, that’s time you know you won’t catch a fish.”

His favorite place to fish is Lake D’Arbonne, but he also said this rig will work in creeks and the Ouachita River, areas like Lake Claiborne and Poverty Point, and in big-crappie waters just about anywhere.

When the fish do move shallow, Stone goes to more-conventional jig setups, but he still prefers spider rigs with larger jigs unless they are up shallow in cover, where he switches to single rigs and often fishes small spinners like Road Runners.