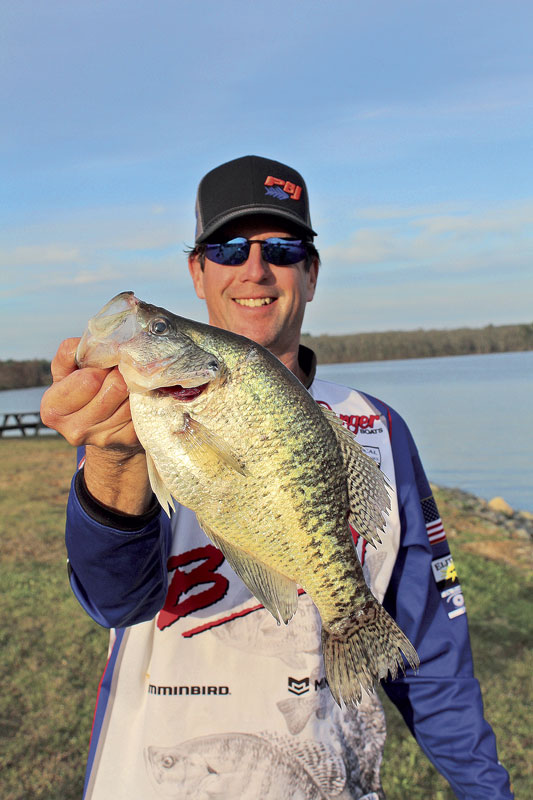 Team Stewart has found the keys to catching monster crappie.

When it comes to catching crappie, very few have a better command of the situation than Terry Stewart, an angler with “home” ties to Louisiana and Mississippi and both of the state’s famous big crappie waters.

Stewart, like most people, started out bass fishing and he loved it. But shortly after moving to Clinton, Miss., he found out about the monster crappie in Ross Barnett and other lakes in the region. After catching a bunch and frying them up, he changed teams. And he also loves to fish on Lake D’Arbonne near his former hometown, West Monroe, La.

Stewart has been crappie fishing for about 20 years. He has done it for fun (and supper). He has guided dozens of others on successful trips. And in recent years, he has teamed with rotating family members — wife Tonya, son Cole and daughter Terra — to take home more than his share of professional tournament trophies. In fact, you could say that Team Stewart has command of many events they fish.

That should be no surprise. “Stewart” is an old Scottish surname meaning “guardian” or “warden” and their fishing prowess keeps them locking up livewells full of crappie consistently. They not only catch crappie on a regular basis, but they catch monster slabs others only dream of.

The best example of that was in a tournament on Lake Grenada where they weighed seven fish totaling 21.17 pounds, including twin 3.83 pound slabs. Yes, two of them.

If catching big crappie is on your bucket list, Terry has some good advice, especially if you are fishing big reservoirs in this region this time of year.

“The main thing about fishing this time of year is don’t get locked in thinking all the crappie are in one depth of water or one type of water,” he said. “D’Arbonne and other lakes in northeast Louisiana are a prime example of that. Fish will be out on the edge of the channel in 20 feet of water. They’ll be on the flats in 10 feet of water. And they’ll be up staging in five or six feet of water or even still in two feet of water around the cypress trees. And here’s the key. Some will be in all those spots on the lake on the same day. They don’t all do the same thing at the same time.”

Stewart is a firm believer that even in the best days of the spawn, fish move in and out from staging areas to the beds. And while some people think the spawn is over by now, he said that isn’t the case.

“Sure, most of the females have probably laid their eggs by now in most of the lakes, but it varies,” he said. “But the males will be up in there guarding the nests until the fingerlings hatch and get out of there. And it happens over a three-month period. After they lay their eggs, females may still hang out near the shallow water nests as well.”

One of the most unique things Stewart has learned from personal experience and from talking to other experts is the fact that sometimes the males will move in shallow and make the nests. Then they will go out and find the big females and escort them to the nest. That makes sense, he said, because how else would they find it? He said he and others have seen on their sonar units smaller males swimming toward the shallows with large females right behind them.

Learning more about crappie every year helps them stay consistent in their catching. And he suggests the same for others.

“Never think you know everything about it or it will keep you from catching a lot of fish,” Stewart said. “Keep learning. Do what you know how to do best. But also try new things.”

Stewart fishes with all kinds of baits. He used to rely mostly on shiners, but also used a lot of jigs with plastic tails. He still does. But his new favorite has become hair jigs. If he could only take one lure with him, it would be the Crappie G hair jigs made by Greg Davis in Tullos, La. He doesn’t have one favorite color, but likes silver or dark gray jigs sometimes and darker jigs with green sometimes. He even has Davis make up some special order jigs from time to time when he thinks a certain color will work.

And Stewart said just like with the “where” in crappie fishing, you shouldn’t get locked in on the “how” either.

“Seriously, when the bite is good, a kindergartener can drop a bait down there close to one and catch it,” he said. “But most of the time it isn’t that way. There’s usually something going on this time of year that can tend to slow the bite up. It can be a lot of rain, wind, a cold front…anything. Lure presentation has as much to do with it as anything else. Sometimes you can ease the jig slowly over a crappie’s head and he’ll nail it. Sometimes you have to bounce it around a little bit and then other times, you just have to hold it as still as possible while it makes up its mind to bite or not.”

Listen to the fish

More than once, Stewart said he has been schooled by other anglers in the boat because they were doing something different and he was slow to catch on. That also applies to the size of a bait. If you fish a certain lure or technique without a bite for 30 minutes or they are hitting short, switch up. Change colors. Change size. Or change the way you present it. A good rule of thumb is that when fish are sluggish, go smaller and slower with the lure and presentation.

“It’s like any kind of fishing,” he said. “You can fish the way you want to and hope to catch some. Or you can present it to the fish the way they want it and catch them. Those who let the fish show them what they want usually are the ones with fish in the livewell.”

There are now more crappie rods on the market than ever before in the history of the sport. And Stewart thinks that picking the right one for your fishing is ultra important.

“A lot of people are going to rods with stout backbones where they can just boat flip two pounders in the boat,” he said. “That may work, but I’ve seen a lot of those same people lose fish on the way up because they are pulling them too hard. I love to fish B’n’M poles because they have enough backbone, but they also have good action throughout the rod and you aren’t going to pull so hard you lose them. The limber part of the poles allows for a lot of feel. That’s huge in crappie fishing.”

Terry Stewart runs the lab for Elite Optical, so vision is part of his everyday life. And so is what he sees in the world of catching crappie: Some things change. Some things don’t.

“There’s no doubt that the new electronics has changed the crappie fishing game more than anything else,” Stewart said. “Live sonar is an absolute necessity to compete in crappie tournaments unless something really odd is going on. I’m not saying you can’t catch fish without it, but if you are just keying on seven big fish, it’s the only way to go.”

The live sonar also lets anglers see what fish are doing even when they won’t bite. Another thing that has changed is the new anglers that are crappie fishing and really, the two are tied together.

“We used to consider it an old man’s sport, but it is not anymore,” he said. “There are a bunch of young guns out there who are so good with the electronics that it’s just like they are playing a video game. They don’t have the history of fishing like guys like me, but they have the knowledge to catch them with the new technology. And they are hard to beat.”

The number of crappie fishermen has changed, too. Stewart said there’s no way to even estimate what the percentage of increase is, but it’s tremendous. And there are new folks taking up the sport every day.

So what hasn’t changed?

“That’s an easy one. Mother Nature,” he said. “Just about when we think we are in charge, she proves different with all kinds of curve balls. If you just get to fish on the weekends this time of year, it’s a matter of whether she’s going to let you or not. Wind is the biggest problem along with late cold fronts.”

Another thing that hasn’t changed is the part that patience plays in catching crappie. Many say it’s a lost virtue, but you better find it for crappie fishing.

“I’ve fished half a day and not caught enough to fry for supper, then found a spot the last hour and caught fish as fast as I could,” he said. “The key is to have patience. Even if you are on fish and they won’t bite, come back later and give them another try.”

Lake D’Arbonne has plenty of shad to attract crappie and the shad start gathering up on the edges of the main channels this time of year. […]