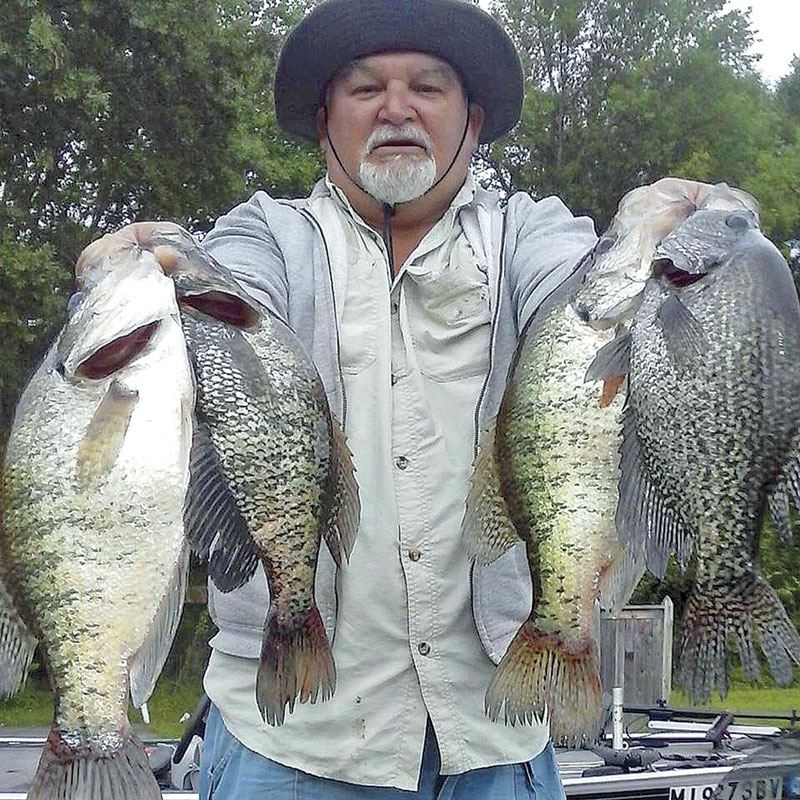 Plenty of anglers know they need to save plenty of January days to target crappie. Here are some places to go and tactics to use.

The year 2021 is finally behind us, and one way to get the year off to a proper start is to wet a line and catch crappie, aka sac-a-lait, milk-fish, white perch, slabs, papermouths, car-tags or just plain crappie. After a successful outing, just call them delicious.

Does it get too cold to fish for crappie? Somewhere far north of Louisiana and Mississippi, a man is sitting in a little shack on a frozen lake fishing through a hole in the ice. You know what he’s catching? Crappie.

Southern waters seldom freeze over, thank goodness, and in the colder months, crappie are easy to find. They will be deeper, in most cases, underneath shad balls. Shad are less tolerant of colder water and seek the warmest, most-oxygenated water they can find to survive. Crappie stack up right under them and pick off the dying shad as they fall from their schools.

Modern electronics will display these shad balls and often the larger crappie suspended close by. It then becomes a matter of finding which bait the fish want. They will take live offerings readily but will also inhale jigs and crankbaits. Fishermen should be prepared to experiment with colors and patterns to find just the right one.

Mississippi’s I-55 corridor lakes have long gotten nationwide attention from serious crappie fishermen. Grenada, Enid and Sardis are well known on professional crappie tournament circuits, and locals hold their perennial sweet spots. Lots of structure, including Christmas trees, crappie fences, pallets and the like has been added to the lake over the years. The fishing there is what some describe as intense. Every year, anglers from surrounding states come to Mississippi to fill their freezers. Every year, the fishery doesn’t disappoint, and the crappie are there.

D’Arbonne Lake in the north-central portion of Louisiana is getting a similar reputation. There is a wide variety of structure in the lake, and crappie are plentiful.

“D’Arbonne is getting a reputation among serious anglers as a go-to crappie lake,” said Ryan Daniel, a fisheries biologist with Louisiana Department of Wildlife and Fisheries. “Our crappie outlook statewide looks to be as good as it has ever been. Two-pound fish and the occasional 3-pound-plus slabs are common in our state lakes.”

Poverty Point is another lake he points to as a popular crappie fishery. Toledo Bend, according to Daniel, can be a little intimidating; especially for the occasional visitor.

“There is just so much water to cover that it becomes a hit-or-miss proposition unless you have an inside track,” he said. “Those who fish the lake regularly learn the places to go and do well.”

It has long been a standing joke that a warming spell in January could be attributed to the Mississippi legislature starting a new session, what with all the “hot-air” being tossed about.

But the warmer days entice some of the first anglers to try their luck in the Pearl River just below the spillway. Consider first why the crappie are there, and second, what anglers can do to recharge their larders with fresh fillets.

“The discharge may be slightly warmer; it has a higher oxygen content than the water in the main lake,” said Tom Holman, a fisheries biologist with the Mississippi Department of Wildlife, Fisheries and Parks. “A good number of the fish there are as a result of being pulled through the gates into the river. Some others may have wintered in the river and are coming upstream to find improved water conditions.”

Being somewhat lethargic during the colder months, the bite can seem slow, but these are the same crappie our northern buddies are pulling out of holes in the ice. A crappie just doesn’t care how cold the water gets.

“There are eddy currents below the spillway where the (crappie) like to hold,” said Vance Anding of Flowood, Miss., a regular to the winter fishing scene. “Minnow-tipped jigs work fine here. Some of the more-popular colors include white/chartreuse, red/yellow and yellow with a silver thread. I like to use a small minnow, because I think the fish will hold it longer, allowing me to get a good hookset.”

Anding said there is no question where the currents are; on any given day, if the fish are there, boats and anglers will be there as well. The spillway has long held a Siren’s song for early crappie anglers. Shore-bound fishermen line the rocks at the water’s edge and cast into the current with every size and type of gear. The only boat ramp is on the west side of the river, and is accessible off the eastbound lane of Spillway Road.

“I’ve seen the time when there were five or six corks between two boats that were scarcely 10 feet apart,” Anding said, “but tempers seldom flare the few times lines get fouled. As long as everyone is catching a few fish along, everyone is happy. If the river starts a fast rise or fall,you may as well go home. I catch my best fish on a river that has a slow rise.”

Canals in south Louisiana are generally a little warmer than the lakes to the north and provide a different fishing experience, according to Milton Gaspard of Golden Meadow, La.

“The crappie I find are in the deepest holes they can find in January,” Gaspard said. “They pull out of the shallows and go deep in December, and that’s where they remain until they start moving up to prepare for the spawn. Keep in mind that deep water is a comparative thing. Sometimes only a few feet makes all the difference.”

Gaspard pointed out that hurricanes last year blew a lot of trash into the canals, and that may hinder some anglers who fish multi-pole spider rigs. He prefers a single pole when searching for fish and switches to two or three poles once he is on them. He also fishes primarily with shiners but admits his largest slab came to the boat on a Road Runner.

“Water clarity is important to me,” Gaspard said. “Clear or black water is the best for winter crappie. I tried to fish Sardis Lake one time to mark it off my bucket list, but it was so stained. We caught a few fish, but I can’t figure how they found the bait. I guess it’s what you get used to.”

On the main-lake side of the Ross Barnett Dam, the assault on  schools of fish takes a slightly different approach. The spider-rigs and deep-running baits are brought into play.

“As simple as it may sound, finding the crappie is the easy part; getting them to take bait is a little more difficult,” said Larry Anderson of Grenada, Miss. “I find the fish with the aid of a Humminbird fish finder. They have been as deep as 18 feet and as shallow as 8, depending on the weather. Warmer days like we had last winter kept the shad up, and the fish were right there with them. I caught a lot of fish last January in 10 feet of water or less.”

Anderson slow-trolls his jigs and crankbaits at various depths parallel to the rip-rap along the dam until he finds a depth/lure/presentation the crappie like.

“As I understand it, the rocks warm faster than soil and remain warmer longer than surface air,” he said. “That’s why the fish gather here along the dam. I’ve seen the same thing happen at Grenada and Enid. That’s closer to home, but I have folks here in the Madison area, and fishing new water is a good reason to make a visit.”

Anderson has also found cold-water crappie in the spillway at Sardis Lake, in an area called the “Lower Lake,” which is part of the Tallahatchie River. Access is good there, and water flow is consistent, as the U.S. Army Corps of Engineers manages the lake at winter pool level.

Being retired, Anderson can watch the weather and water conditions to choose the best days to fish.

“The two things wrong with retirement are: you never get a holiday, and you can’t call in sick,” he said. “Seriously, consider a day when the (Lower Lake) is steady or on a very slow fall or rise. Get as close to the rip-rap as you can or fish the points just downstream of the spillway. On more than one occasion, I’ve tied on a 3/8-ounce red/yellow Road Runner and worked the edges of the current with a spinning rod. If the crappie are in there, they will take the bait.”

To become a better crappie angler is a simple matter of becoming social. Crappie-fishing clubs — the Magnolia Crappie Club being one such organization in Mississippi — hold monthly tournaments, and members are usually willing to share their secrets.

Many husband and wives fish as teams and enjoy the social aspect of competition and frequent fish fries.

In the absence of such a club or organization, local tackle shops often have a good handle on popular baits and techniques. Don’t be too shy to ask questions. Other anglers putting in and taking out at boat ramps are also good sources of up-to-date information.

Most catches of amberjack are incidental catches by anglers targeting snapper and grouper while bottom fishing with cut bait. […]

Louisiana has some of the highest numbers of wintering woodcock in the United States. […]

Bass are getting biologically ready for the spawn, which for the most part usually occurs in late January, February and March at Toledo Bend. […]

About David Hawkins 3 Articles
David Hawkins is a freelance writer living in Forest, Miss. He can be reached at hawkins2209@att.net.