The key to summertime crappie fishing is catching your limit and getting off the water before the blast furnace really kicks in. And this angler knows just how to make that happen.

Trolling crankbaits has exploded onto the crappie fishing scene in the last few years. And, while there is bit of a learning curve, the tactic can be highly productive in terms of filling the freezer with fillets.

Greg Hammett and his buddy Mike McNerlin introduced me to crappie cranking one hot summer day on a lake near Shreveport.

When they started pulling out an almost endless array of jigging poles and bass rigs, Hammett apologized for the delay in getting to the actual fishing.

“It takes a while to get deployed,” he explained.

The setup for trolling — or cranking, as it’s also called — is similar to spider-rigging.

Hammett and McNerlin put a spinning rig on either side of the motor at the stern and five rigs jutting out from each side of the boat.

Their gear ranged from 7-foot bass rods to 14-foot crappie poles, and each one had a specific function.

“The crankbaits on the 14-foot poles are running about 100 to 120 feet behind us; then the 11-foot ones are a little closer and so on,” Hammett said. “Staggering them allows me to cover a wide swath of water, and it helps to prevent the lures from getting all wadded up when I’m turning the boat.”

“If you have a lot of waves from the wind or skiers, you often catch more on the rods out back because they’re not affected as much by the rocking of the boat,” Hammett said.

Before casting the lures, the angler made sure that the reels’ drags were set as light as possible so the crankbaits did not tear out of the crappies’ mouths.

“One rookie mistake is to set the drag too tight,” Hammett said. “You really should set it as light as possible. They don’t call them paper mouths for nothing.” 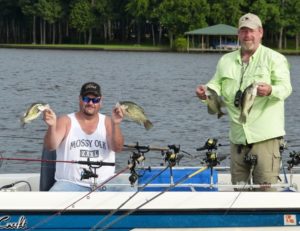 When all the rigs were ready, Hammett and McNerlin began casting the crankbaits behind the boat. Their goal was to sample as much of the water column as possible in order to locate the depth at which the crappie were holding that day.

Knowing how far to cast the lures to get them to run at different depths is the trick.

“To get the bait to the proper depth, one has to consider line length and boat speed,” Hammett said. “The more line that is let out, the deeper the bait will run.”

Speed also is a factor.

Hammett and McNerlin mostly use Bandit 200 series crankbait, but they sometimes go with the 300 series to stagger the lures at different depths until they figure out where the fish are holding.

But, as Hammett explained, other bass crankbaits are equally effective.

As far as colors, garish patterns often are the most-effective.

“A lot of times the brighter the bait the better they bite,” Hammett said.” Bandit crankbaits in orange crush, wild thing and mad cow are always good, but they like any bright color such as school bus yellow, pink and blue.”

Red is the only bright color he does not use.

“I don’t fish red lures because you catch too many catfish,” Hammett explained.

Instead of buying scads of different-colored baits, Hammett saves money by just painting his own.

“You can order clear baits off the internet and paint them yourself or paint old baits,” he said. “I do that a lot because it’s so much cheaper.

“I often paint them green on one side and black on the other, like the traditional black-and-chartreuse tube jigs. Black is a really good color, as well.”

Once they began to troll, I noticed Hammett kept looking at his phone — and then I realized he was actually running his remote control trolling motor.

While one can pull crankbaits with a foot-controlled motor or even a gas motor at idle, a remote control makes it much easier because it allows you to move about the boat and monitor all of the poles.

Hammett has a Minn Kota Terrova with the i-Pilot feature, and he highly recommends it to others.

“It would be hard to do this without it,” he said. “Trolling crankbaits is like running a combine: You just go back and forth until you find the fish.”

Within a few minutes, McNerlin caught a nice crappie on an orange crush Bandit just as we trolled over the edge of the channel.

This became a pattern for the day, as did changing directions. Hammett, in fact, sometimes looked like a World War II destroyer captain zigzagging to avoid torpedoes.

“Sometimes it helps to make a zigzag to vary up the lure depth and speed,” he explained. “Or you can make a wide turn, which will slow the lures down on one side of the boat and speed them up on the other.

“That seems to trigger a bite, so take note of which side gets the bites and then speed up or slow down accordingly.”

As the morning wore on, the crappie count steadily increased, with an occasional channel cat and barfish thrown into the mix.

I was surprised no bass were caught, but Hammett said he rarely catches that species when cranking.

By late morning, the heat had become oppressive — a common problem for summertime crankers.

We called it quits, but the half-day outing put 37 crappie in the cooler. It was a memorable trip by anyone’s standards but nothing special according to Hammett.

And cranking veteran Clark LaBorde said there is no great secret to finding crappie on these lakes.

“During the post-spawn and on up into the hot summertime, you need to follow the shad,” LaBorde said. “They aren’t hard to find because you can see fish hitting them, as well as the shad flipping out of the water.

“Oftentimes I see a big ball of (shad) swim by the boat and even pull my bait up with several shad accidentally hooked on the treble. That’s when you know you’re on fish and fishing the right depth.”

It’s also important that your lake bottom has ditches, creek channels and timber.

“Contrary to what people think, wide-open water isn’t the best scenario for trolling crankbaits,” LaBorde said. “There has to be a reason for the fish to concentrate in an area. Very seldom will crappie suspend in an area with a flat bottom that contains no ditch, slough or scattered timber. A baitfish is going to give itself every opportunity to live; they hang out in areas like this for cover, and that’s where you’re going to find crappie.

“I like to fish the mouth of creeks, small sloughs, big flats containing scattered timber and the edges of ditches along a timber line. These all provide ambush points for crappie that are trying to fill their bellies as quick as possible.”

Unfortunately, many people avoid the areas that hold crappie because they are afraid of hanging up on stumps.

“If you’re scared to lose a bait, this tactic probably isn’t for you,” LaBorde admitted.

On the other hand, he said he has only lost a handful of baits over the years.

“What you’ll find is that 99 percent of the time a crankbait will jump over a stump, and that often triggers a strike,” LaBorde explained. “Typically the only time you get hung up is if you run into a trotline or the line goes over the top of a stump and gets in a crack in the wood.”

About Terry L. Jones 93 Articles
A native of Winn Parish, Terry L. Jones has enjoyed hunting and fishing North Louisiana’s woods and water for 50 years. He lives in West Monroe with his wife, Carol.