When Fuzz Fontenot of Kaplan went chinquapin fishing in Chatham’s Caney Lake back in May with his brother Eddie, they were using ultralight fishing gear with 6-pound test line. They caught their share of the tasty panfish, but Fontenot also caught something much bigger. He hooked and reeled in a 39-pound flathead catfish.

“It was a four day trip, from Thursday through Monday. I’d been wanting to fish this one spot that had a lot of slime and weeds on the surface. Those chinquapin like to get under all that stuff so I wanted to get my nightcrawler right on the edge of it. My brother had been telling me not to do it, thinking I’d get hung up. But by Sunday afternoon, I decided it was worth a try,” said Fontenot.

Almost as soon as he made his cast, he felt like he was hung up, just as his brother had warned him. 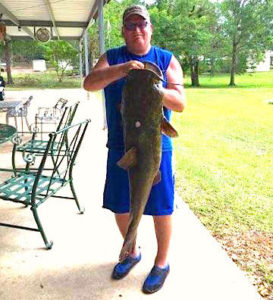 “I said ‘I’m hung up,’ but when Eddie looked, the line started moving. He said ‘you’re not hung up; you’ve got a fish,’ and then I saw that it was a big catfish. We were worried about the line being so light and I was using a micro reel. I fought the fish for probably 10 minutes or so. Eddie said he was going to jump in and grab the fish. But then some other anglers in a nearby boat saw us and offered us a net. That was a big help,” he said.

They netted the fish and measured it. The fish was 45 inches long and had a 25-inch girth. They took it to nearby Hooks Marina to weigh it on certified scales.

“It weighed 39 pounds even. My brother thought there might be a state record for line class so I did all the paperwork to get the fish certified. I found out Louisiana doesn’t keep line class records, but my fish is in the Top 10 for flatheads in the state,” he said.

Catfish so big they broke all our limb lines

In this video, Jared Serigné and his buddy set limb lines for catfish. Limb lining is a great way to catch a bunch of catfish.  […]

About Brian Cope 148 Articles
Brian Cope of Edisto Island, S.C., is a retired Air Force combat communications technician. He has a B.A. in English Literature from the University of South Carolina and has been writing about the outdoors since 2006. He’s spent half his life hunting and fishing. The rest, he said, has been wasted.