The King Kat Tournament Trail closed out the 2021 season on the Red River Waterway. Catfish anglers from 14 states traveled to Natchitoches, La., for the year-ending Championship event presented by Bass Pro Shops Cabela’s. The Red River Waterway Commission hosted 22 teams that gathered to test their catfishing skills against other anglers and Mother Nature in an attempt to win against the best of the best in the 2021 Classic.

Anglers found the waters of the Red River Waterway to be a little stained, but nice fall weather made for great fishing conditions. The air temperature was in the low 40s to begin each day but warmed to the high 50’s both days. The winds were light with sunshine on Friday but cloudy on Saturday.

Teaming up to take the top spot were Charles Blair, Alex Nagy, and Doug Vaughan. The Altenburg, MO team led the competition after day one and added 61.78 pounds on day two to claim the Championship with 144.66 pounds and earn the $40,000 Lowe Boat Package. They also won 2nd place in the Lowe Boats One Bite One Boat Big Fish competition to add $3,000 to their payday.

The team drove through the night on Tuesday to arrive in Natchitoches around 7:00 a.m. on Wednesday. They went straight to the water and started picking it apart. They studied water levels, temps, current, and any other information they could.

“We had done some research on the way down,” recalled Nagy. “When put to the test, our research ended up being small fish, lots of water, and a cold front. So before we put rods in the water on Wednesday we backed down to our Rippin Lips Fishing Super Cat mediums. We rigged with 5/0 hooks and bait that ranged from shad, livers, gizzards, cheese, and believe it or not stink bait. We served up a buffet to see what these small fish wanted.”

The team quickly discovered that it was shad that the fish wanted. They pinned 2 to 3 baby shad on a hook and got a few bites and caught one small fish. They went back to the hotel to regroup as it was raining and a developing cold front was making them think the bite would pick up.

“On our second day of prefishing we went to another area and tried a few different tactics,” continued Nagy. “We finally caught a 10-pound blue cat at 3:45 p.m.”

Encouraged, the team went back to the hotel and rigged their Rippin Lip HD rods with 8/0 tournament-grade circle hooks. They were sure that they would need heavier tackle and bigger bait if they want to contend.

“On tournament day 1 we go to an area that we thought could produce bigger fish after a cold front,” explained Nagy. “The sun was up and we went to shallow water. We started catching fish, ending up with 25 fish for the day. Our biggest 3 weighed 82 pounds to take the day 1 lead.”

Having been in this position at Cape Girardeau and getting knocked out of 2nd place they were a little worried. They set a new game plan for day two. Their number one goal was to just keep the bait in the water.

“We targeted another area similar to day 1 and hoped we could pick up a few good fish,” Nagy said. “The day started slow but we finally started figuring out what they wanted. We kept bait in the water slowly changing minor things to get bigger fish to bite, things that we have learned over the years. Finally, at 2:10 p.m., 20 minutes before we need to reel up and make sure we hit the weigh-in line at 4:00 p.m., our Rippin Lips Super Cat HD folds over and starts peeling drag! It was a 29-pound blue cat and it replaced our 12-pound small fish for the day.”

“There is one thing I can tell you about the Red River Waterway,” concluded Nagy. “The blues fight harder pound for pound than any other blue cat fishery in the country. I will be back!”

The husband/wife team of Ron and Wanda Barner finished with a total weight of 74.3 pounds to claim the 5th place spot and earn a check for $2,000. The Wheatland, MO team’s bag had Big Kat of the tournament which earned them the top spot in the Lowe Boats One Bite One Boat Challenge. The 50.26-pound blue that they caught on day one earned them title to a 20-foot Catfish Model Lowe Boat complete with a 150 HP Mercury engine, trolling motor, electronics, onboard charger, Power Pole, and Smooth Move Seats valued at $40,000. 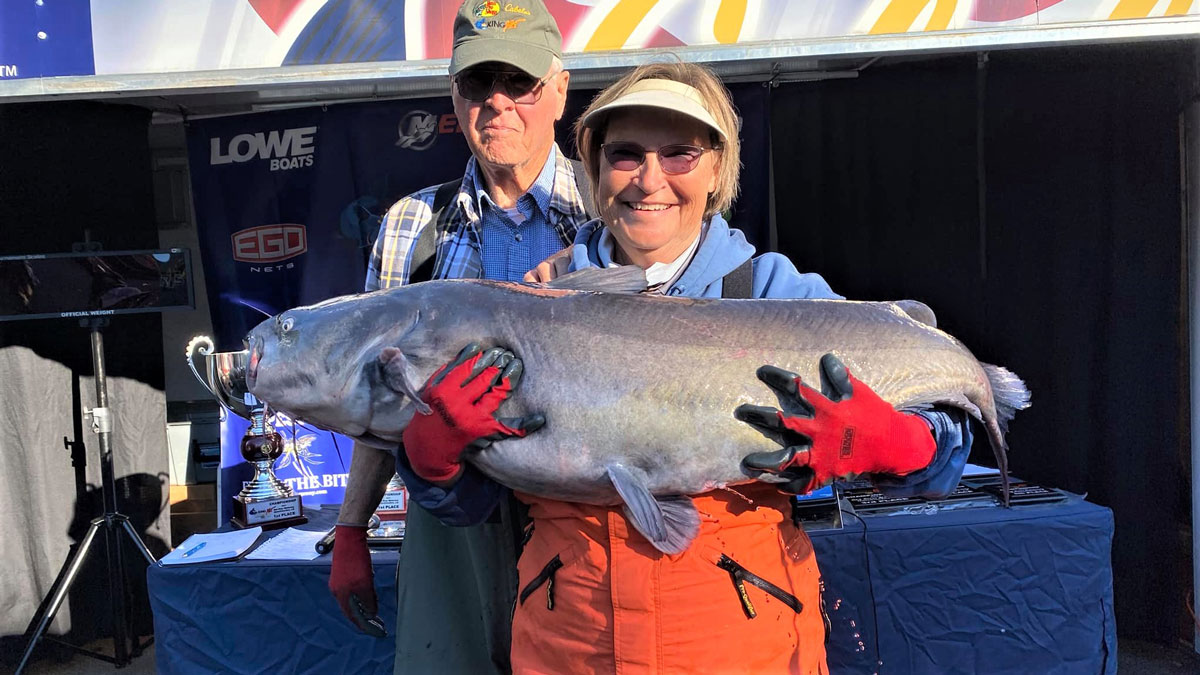