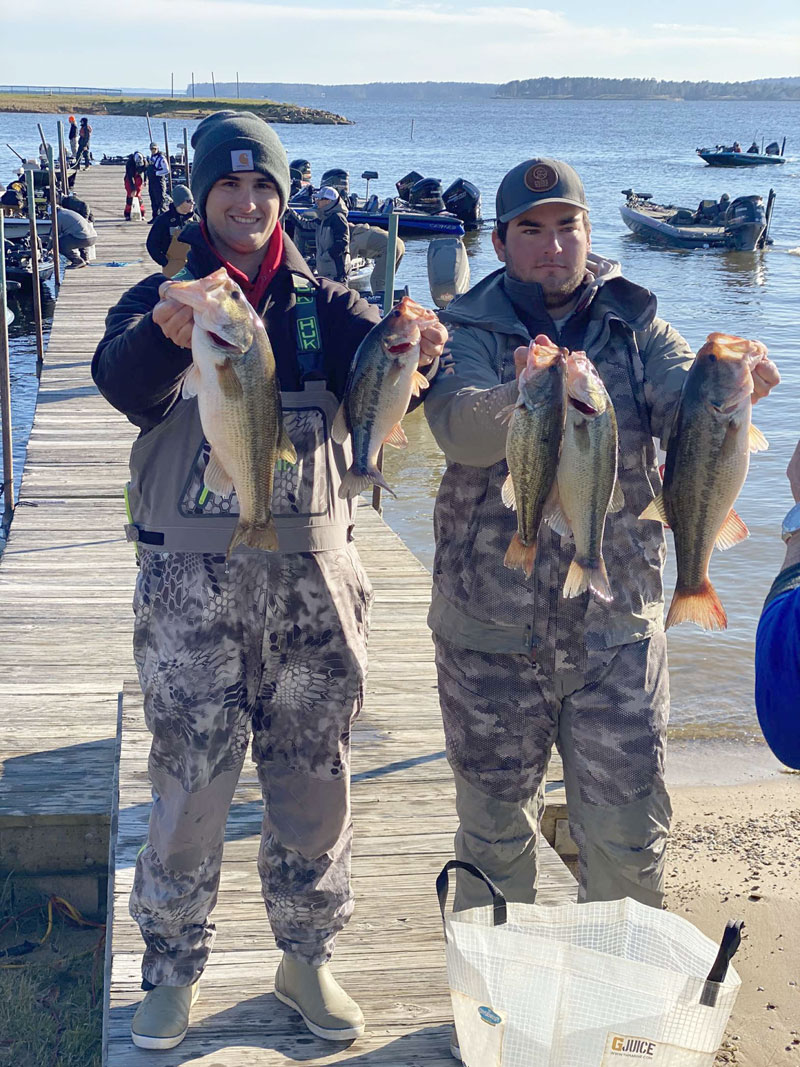 As a senior in his fourth year on the Louisiana Tech Bass Fishing Team, Cooper Arthur of Calhoun feels more responsibility and urgency than just finding and reeling in bass.

Arthur is president of the Bulldogs’ fishing team and his mission is simple but demanding.

“We’re trying to grow. We’re kind of rebuilding right now,” the all-around outdoorsman said while wetting a line after a day at his summer job. He was fishing his “home lake,” Caney Lake, approximately 20 minutes from Calhoun.

“My biggest goal is to try to get our name out there more so high schools around here (local, state and regional) will know we’re here,” he said.

Arthur, 21, has done his part in putting the Ruston university’s team on the map since he graduated from West Ouachita High School, where he qualified for the state championship in bass fishing as a junior and senior. He also qualified for nationals his senior year.

Arthur and Brodie Paige, this year’s recipient of Louisiana Tech’s Lane McGaha Memorial Scholarship, finished 23rd in May at the Association of College Anglers National Championship at Pickwick Lake in Alabama.

They started the year with a fourth-place finish in March in the MLF Abu Garcia College Fishing Southern Conference tournament at Toledo Bend, which he deemed his favorite lake to fish. Arthur also won a Louisiana Tech qualifier tournament March 26 at Lake D’Arbonne. He’ll probably pair up with Paige again this year, depending on how pairings go up and down the lineup.

“We’ll figure it out once we get to school,” he said. “I’d like to have as many teams as we can traveling.”

The son of Jay Arthur and Jessica Schwartz, he is at home whether he’s in the classroom focusing on studies in construction engineering technology or in his Skeeter FX21. This past summer he worked as an intern at Steel Fabricators of Monroe, where he hopes to land a job after he graduates.

“I would hope to stay with them because they’re a great company,” Arthur said. But right now it’s catching bigger bass and making a bigger name for Louisiana Tech in the fishing world that is on his mind.

For sure, he’ll always be bass fishing, spending as much time as possible on Caney Lake and at Lake D’Arbonne, which is 25 minutes from his home.

As Arthur talked about his collegiate bass fishing career, he fished for schoolies in 18-foot depths in the midsection of Caney Lake. He was offering topwaters when they surfaced and a drop shot when they went down. He would recommend that technique to others.

His favorite time to fish the lake is late February and early March.

“I like pre-spawn at Caney,” he said. “You can catch them almost anywhere. You can go early in the pre-spawn and catch on Rat-L-Traps around grass beds or go deep and fish Carolina-rigged soft plastics on deep humps and points.”

His go-to there is a lipless crankbait, either a ½-ounce Rayburn Red Rat-L-Trap or a similarly colored Strike King Red Eye Shad. His choice for a soft plastic on the C-rig is a watermelon/candy Brush Hog.

Arthur began catching bass as a young boy on trips with his father and grandparents. He grew up with a passion for competitive bass fishing, starting at WOHS, then Louisiana Tech.

He kept his hands in the game over the summer by fishing evening tournaments Tuesdays, Thursdays and Fridays at either Caney Lake, Poverty Point Reservoir, Lake D’Arbonne, Claiborne Lake and Lake Bartholomew.

Even when he’s in a deer standing hunting deer on Big Ticket Hunting Club land near Chatham, he’s reminded of bass fishing because he can hear outboard motors as bass boats take off on nearby Caney Lake.

The thought of fishing pro bass tournaments in the region is fresh in his mind. There are numerous circuits with derbies to get his feet wet, such as Major League Fishing’s Toyota Series and Phoenix Bass Fishing League, plus Bassmaster Opens.

“I haven’t done that yet,” he said. “Hopefully, I think next year I’ll do some MLF around here that fish Toledo and Rayburn. It’s not too far to travel and I get to fish against some of the best.”

Will Arthur go further than that, say to Bassmaster Opens or Bassmaster Elite Series, or the MLF’s Tackle Warehouse Pro Circuit and Bass Pro Tour?

“I’d really love to,” he said. “I’d love to chase that dream of possibly going pro one day.”

Getting that engineering degree is first and foremost, however, according to Arthur. Once he’s got that in his back pocket, he will take it from there.