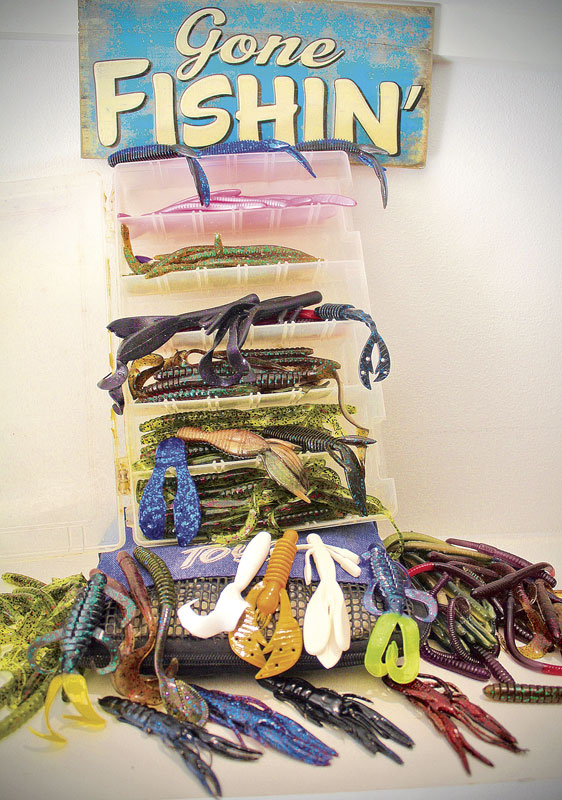 Back a half century ago, young Bill Dance busted on the scene of bass fishing like a bull in a china shop. His main weapon of choice in landing huge stringers of largemouths was a simple plastic worm. In fact, he knew so much about it he wrote a book, “Bill Dance — Techniques of Bass Fishing.”

“Well, I guess there are about as many ways to fish a worm as there are to cook potatoes,” he said in the book. “Without a doubt the finest way I’ve ever seen is the old Texas rig. I learned this method four years ago and in my experience, it’s the only way to rig and fish a worm.”

Dance wrote that in 1971. I bet if he read that today, he’d chuckle so hard his Tennessee cap would fall off. In those days, anglers had about four choices of worms to choose from — Fliptails, Mister Twister Phenom, Creme Wiggle Baits and Cordell’s Tattletail. Colors? If you got lucky, you could find the whole range at your local tackle dealer — black, purple and blue. That’s pretty much it.

Pro angler and fishing guide Homer Humphreys of Minden was around then and he remembers those good old days fondly. He also knows the amazing transformation to the variety of sizes, shapes and colors that are available today and the whole range of techniques to fish them.

Today, most soft plastic lures aren’t even worms. They are Beavers, Brush Hawgs, Turbo Fattyz, Hella Crawz, Bunker Hawgs, Wild Thang Craws and the like. They fall into a category called “creature” baits. They crawl out in all shapes and sizes and fishermen have discovered that different plastic lures are perfect for different times of year and fishing situations.

You can still fish a regular or curly tail plastic worm just about any time. But when it comes to plastic baits, early season bass seem to like big and healthy creature baits. As spring wears on and the spawn leaves fish a little more picky, it’s time to consider downsizing and getting creative as well. That’s where drop shots, finesse worms, wacky rigs, shaky heads, Carolina rigs and smaller lure presentations can help you add to your daily catch.

Unless you are a full-time fisherman, there’s no way to learn or fish it all. So to get a little help deciphering all those choices today, we turn back to that experience that Humphreys has gained in his year’s of fishing through the plastic transformation as a guide and professional competitive angler.

“There is no doubt about it, the choices today can be overwhelming,” Humphreys said. “Even people that have fished a long time can’t decide what color or action of soft plastic to fish with. But the ones that catch fish usually end up going back to what they know and that’s what keeps them in the action.”

Humphreys said if you are a newcomer to the sport, there’s a simple rule of thumb to follow that you can’t go wrong with.

“Get you a couple of varieties of soft plastics that you know people are catching fish on at the lake you fish and give them a try first,” he said. “Don’t try to get every color in the world. Seriously, if you stick with some basic watermelon and watermelon red colors and then get black or plum type colors, you can catch fish in just about any type of cover or water.”

The old Texas rig is still the go to for most anglers, Humphreys said. You can rig straight tail or curly tail worms that way and you can even rig creature baits that way.

A secret that many pros don’t share is that picking what type of plastic to fish often comes down to the simple fact of what temperature the water is.

“Those bass know that the bait they are going to eat is cold blooded just like they are,” he said. “If the water is cold and they are sluggish, they know the baitfish is cold and sluggish, too. If they see a big curly tail lure coming through the water and it’s 50 degrees, they know that isn’t natural. Fish smaller, straight tail lures when the water temperatures are in the 50’s. Fish a swimming tail worm when the water is in the 60’s. As the water warms up, the bass get more aggressive and the bait gets more active, too. So it’s a natural matchup.”

At one time, anglers after big fish used a “jig and pig” setup with great success. But today the creature baits are more popular than the big football jigs with big pork rind trailers. Anglers still fish jigs, but with a more bulky critter type trailer.

“I’ll tell you, I’ve done a lot of jig fishing in the past, but today I’ve gone to more of just using a creature bait rigged Texas,” Humphreys said. “It’s simple, a Texas-rigged creature bait with the weight pegged can go right down in the thickest of brush and not hang up. I know there are weedless jigs, but if they are weedless enough to keep you from snagging brush, they probably are hard to snag bass on.

“There’s another benefit to bigger soft plastics here. You don’t disturb the cover as much with it. With a jig bouncing around, it knocks on the limbs and can spook the fish. If you fish a top without a bite with soft plastic, you can come back to it and maybe they’ll hit it the next time.”

One way to fish soft plastics effectively is over grass, not just in it, Humphreys said.

“When you’ve got a lot of grass like hydrilla and it’s too thick to throw a buzz bait, you can rig a speed worm and buzz it right across the top of the grass and if there is a bass in there, he’ll explode on it,” he said. “You can fish with a weightless worm in the same situation and just pull it across slower. Then when you come to a hole in the grass, let it drop down in the opening. They’ll nail it.”

“If I were going to use a scent on the lure, I’d stick with either shad or crawfish smells,” he said. “Those are the most natural.”

Learning to fish plastics is the hardest of any type of bass fishing, Humphreys said. If you want to learn how, or if you know the basics but want to get better, he has some simple advice.

“Go fishing for the day and leave everything else at home,” he said. “Take a variety of your favorite soft plastics and commit to fish them all day long. Do that more than once. The amount of time you spend, the better you’ll get. You’ll learn to feel the difference between a limb and a bite. You’ll learn that little ones tend to peck at it and the big ones tend to get it and just swim off with it. Sometimes you don’t even feel the bite. There’s so much to learn, no matter which plastic you choose.”

Are soft plastics the best lure to fish for bass?

“I can’t say that for sure, but this should answer the question,” Humphreys said. “When everybody is down and out and can’t get a bite any other way, they are going to put on the soft plastics and grind it out. It’s not the easiest thing to do, so some people don’t want to. But when you’ve got to put a fish in the boat, that is what you’ll throw.”

So far, no outdoor writer or fisherman that I know has been able to actually get a straight answer out of a largemouth bass on why they love soft plastic lures so much, so all we can do is speculate.

Of course, the main thought is that bass are hungry a lot of the time and when they see a slow moving plastic lure bouncing in front of their face, it’s an easy meal. Plus, the various action on the lure makes it look like it is alive. Worms don’t really mimic any natural food that bass eat, unless it is baby snakes, but they sure love them.

One of the top theories is simply that bass don’t like anything in their personal space, so when a plastic worm or creature invades their living room, they smash it — even when they aren’t hungry. Those are called reaction strikes — when the bass just sees it and eats it. Kind of like when a fisherman walks through the kitchen and sees a Little Debbie on the counter.

A third theory is that the reason they are so effective is, unlike hard plastic lures with three sets of treble hooks, bass like the way they feel. When they bite on, it doesn’t bite back until the angler sets the hook. Then, it’s too late.