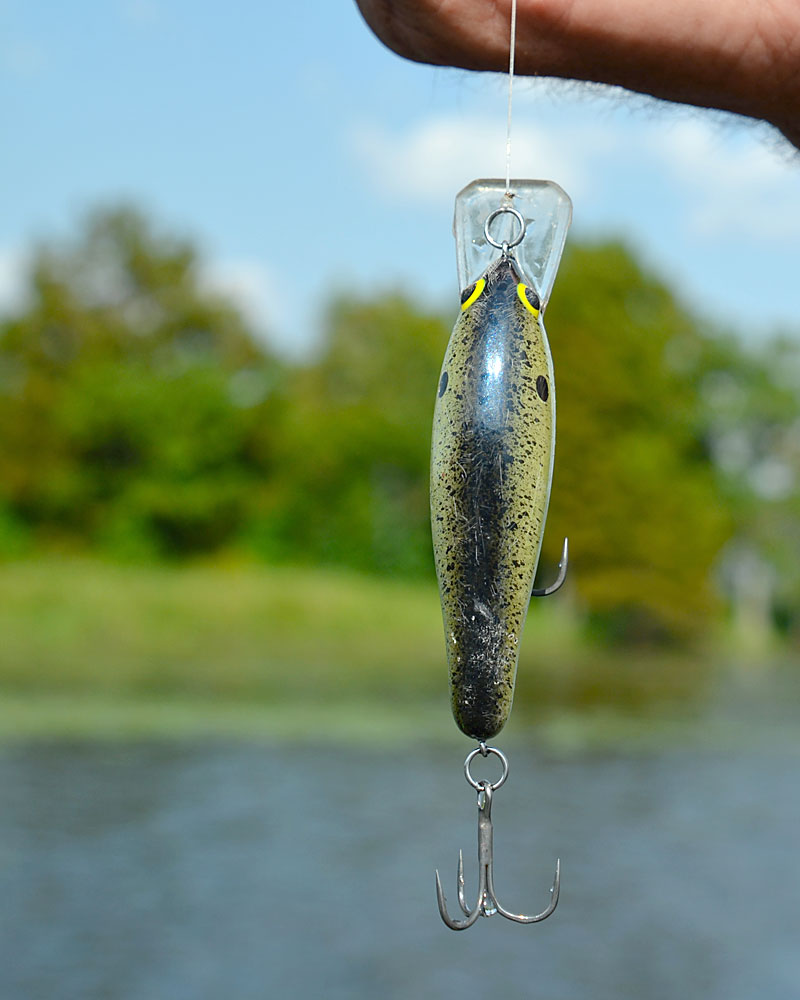 Every angler knows that bass prey heavily upon shad, a dominant forage species for bass and other predators in many Louisiana and Mississippi waters.

Look at a shad from the side. It’s flat, not rounded like many baits.

Look at it head-on and it practically disappears. Bluegills and other bream also give off a very flat appearance. With flat sides and thin profiles, flat-sided crankbaits closely mimic the shape and movement of threadfin shad and bluegills.

“In the fall, shad is the predominant forage for bass,” said Caleb Sumrall, a professional bass angler from New Iberia who fishes the B.A.S.S. Elite Series. “Shad come out of the main river and go shallow into the backs of creeks, pockets and oxbows. I’ve done very well fishing the Red River with flat-sided crankbaits. Toledo Bend is another obvious place for fishing these baits. I’ve also done well in the Atchafalaya Basin when it’s right.”

In the fall and winter, frigid bass turn lethargic and don’t want to chase fast baits far or expend too much energy. They would more likely hit a slow, subtle bait that presents a tempting morsel that a bass can easily slurp without much effort.

“Flat-sided crankbaits are most effective late fall or early in the winter,” said Pete Ponds, a Bassmaster Classic veteran from Madison, Miss. “As the water temperature drops, flat-sided crankbaits become increasingly more effective. November is a great time to throw it. They are great baits to throw when bass are chasing shad because it looks more like a shad than a rounded crankbait.”

Flat-sided crankbaits vibrate through the water with subtle tight wiggles instead of pulsating with wildly erratic movement. The subtle baits give off vibrations similar to those created by live shad, good for tempting bass in cold water.

“Shad don’t swim with massive tail movements,” Sumrall said. “They move with very subtle actions. Flat-sided crankbaits have the same subtle action. When water temperatures reach the low 50s to about 45 degrees, I throw a flat-sided crankbait. When fishing cold water, I don’t want a crankbait with a wide wobble because fish are not as aggressive.”

Flat-sided crankbaits could work in many situations. A traditional rounded crankbait more resembles a crawfish and works best when bass key on crawfish. Bass might smack shad at any opportunities, but they especially go after the thin baitfish in the fall.

When shad head up the creeks, bass follow. In the fall, bass want to feed up with rich protein and oils that shad provide to prepare for winter. As shad migrate, bass often gather in schools. Attacking from below, bass herd baitfish into balls and force them to the surface where the terrified shad run out of escape room. Then, bass move in to gorge themselves on anything they can catch.

Largemouth bass in a school chasing shad become frenzied. They attack anything that moves, hitting the hapless shad from all sides. Birds also dive to get their share of the protein. Anglers can often find schooling fish by watching birds dive or hover over the surface. Anglers lucky enough to find a school and react quickly might catch several good fish in minutes.

“Bass swim around like wolfpacks and bunch up the shad, like they are corralling them,” Ponds said. “I’ve seen bass push shad up on the edge of the bank and even knock them out of the water onto the bank. They devour them when the shad flip back into the water.”

In a frenzied school, make extremely long casts. If possible, throw crankbaits beyond the schooling activity and run them through the area. Over the spot where the bass struck, pause to let buoyant baits float up a few moments like a stunned fish. Then resume the retrieve. For fooling schoolies, use 10- to 12-pound test fluorocarbon.

“With a different wiggle and a tight wobble, a flat-sided crankbait makes a great bait to throw at schooling bass,” Ponds said. “When bass chase shad on the surface, make an erratic retrieve, the more erratic the better. Don’t just throw it out and reel it in. Make the bait look like something is chasing it and it’s fleeing for its life.”

Flat-sided crankbaits also work especially well when bass feed upon shad or bluegills in shallow water. Fish them along rock or concrete riprap shorelines. Rocks and sunken logs grow with algae that can provide food for small fish. That attracts bigger fish.

Shallow flats and tiny drains also make great places to throw flat-sided crankbaits. A long sloping shoreline or point also makes a superb place for working flat-sided crankbaits because anglers can find fish at various depths. Along a sloping point, bass can move up shallow or drop into the depths easily.

“Most often, I fish flat-sided crankbaits in shallow water,” Sumrall said. “I’ll look for any drains with sandy, hard bottoms, laydowns, rock, old boat ramps and stuff like that. Most flat-sided crankbaits don’t go very deep. Some baits made by SPRO dive to six to nine feet deep. Some of my favorites are a SPRO Little John 50 or a SPRO Little John MD 50.”

Any type of isolated cover, like a brush pile or fallen tree sitting in the right area, can attract cold-water bass like a magnet. A long shoreline with one or two fallen trees, a stump sitting in the sun by itself away from shore or a lone rock frequently holds bass waiting to ambush a shad or other morsel that passes through the right spot.

“When it’s really cold, bass are not as aggressive,” Sumrall said. “They might not hit the bait on the first cast. That doesn’t mean they’re not there. They are not going to be chasing bait. If I see a good piece of cover, I’ll make multiple casts back to that piece of cover and hit it from all different angles. We might need to hit them in the nose.”

Bang it off cover

Flooded timber, dock pilings and bridge pilings provide bass with cover from the surface to the bottom. Sometimes, bass hang near the surface, suspend in the middle or hover just over the bottom. Run lures at varied depths and into any cover.

For colors, stick with anything natural that mimics a shad, such as whites, pearl or gray shades, perhaps with some blue mixed in or a black back when bass target threadfin shad. When bass chase bluegills, try firetiger, gold and red or chartreuse and blue. As water warms in the spring, crawfish emerge from the mud. Therefore, colors such as red, brown or black, often with a twinge of orange, yellow or blue work very well at that time of year.

“In the fall, I mostly throw anything shad colored, like chartreuse with white sides,” Sumrall said. “At that time, crawfish will be buried in the mud. People might catch a bass anytime on any color, but I always like to ‘match the hatch.’ I use a bait that looks like the prey bass want to eat at that time.”

Hungry bass can’t resist a delicious shad swimming seductively past its nose, so offer them something that resembles a delicious threadfin for hot action on frosty days when lethargic bass want a more subtle meal.

About John Felsher 21 Articles
John N. Felsher is a professional freelance writer and photographer with more than 1,700 articles in more than 117 magazines to his credit.