North Louisiana is known for lakes that produce big bass. Caney Lake holds the state record with other lakes such as D’Arbonne, Claiborne, Bistineau, Black and Caddo getting in on the action as well.

There is one lake, however, that has quietly and without fanfare, been a quality bass producer since it was formed 63 years ago when Kepler Creek was impounded to form 2000 acre Kepler Creek Reservoir, locally known as Kepler Lake.

Billy Willis, a 62-year-old bass angler from Ruston, has caught bass in virtually all these lakes but had not really tried for big bass on Kepler until this past weekend.

“A guy I work with has a friend who has been telling him about catching big bass on Kepler so I decided to give it a try,” said Willis.

Arriving at the lake around 7:00 Saturday morning, August 22, the lake nestled and virtually hidden in the hills of Bienville Parish, Willis spent several hours without catching a bass. It was not until around 11:00 that his luck changed for the better.

“There were a couple of other bass fishermen on the lake and they were picking up some schooling fish, nothing of any size,” Willis said. “They eventually moved on so I moved into the area where they had been fishing. This lake is loaded with stumps and the bass had been schooling around a particular area. I noticed that the stump line was in about three feet of water but there was a drop off next to the stump line that dropped quickly to six feet. I decided to give it a try.”

Willis was fishing with a Shimano reel mounted on a 7’4” Falcon rod with 20 pound fluorocarbon line. His preferred method of fishing is using a Carolina rig and below a swivel, he had tied a two to three foot 12 to 15 pound leader, a 2-0 hook to which was attached a green pumpkin Fluke with gold flake.

“There were lots of shad in the area so this color matched what the fish were feeding on,” he said. “I caught a couple of school fish around the stumps and I decided to back off and fish the drop off that was away from the stumps.”

Casting to the edge of the drop off, Willis let the lure go to the bottom and immediately felt something hit. He set the hook and knew it was into something pretty big because it hardly budged.

“Fortunately I was able to work the fish away from the stumps into the deeper water but because it never came to the top, I assumed I’d hooked a big catfish because most bass will come to the surface and try to shake off,” he said. “This fish just kept pulling until it seemed to give up and I was able to bring it to the boat. It was only then that I saw I’d hooked a really big bass.” 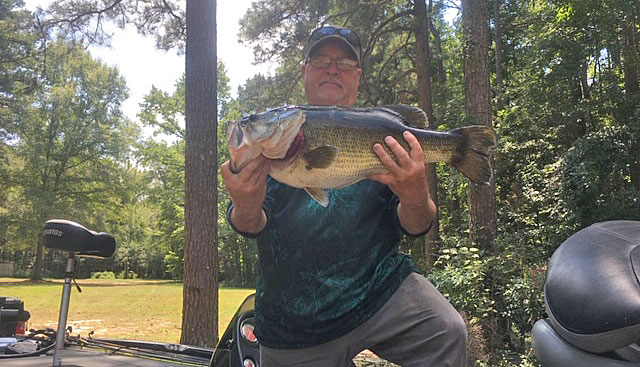 Placing the bass in his livewell, Willis noticed that the bass quickly turned belly up. He had planned to release the fish but because of the stress or the heat of the day, the fish soon expired.

He had no scale with him and it was only after he returned home a couple of hours later that he weighed the dead fish which tipped the scales at 10 pounds, 9 ounces. One has to wonder what the big female would have weighed when she was full of eggs in March rather than in August.