These bass anglers spend every available minute together on the water, and they know there’s no place better for numbers of bites than Bayou Black.

A cold front had pushed through South Louisiana days before our scheduled trip to Bayou Black, and the worry was that the forecasted blue-bird day would wreck the fishing.

But Prairieville’s Kurt Cook and his Gonzales nephew Adam Cook had to drive through pea-soup fog to reach Bob’s Bayou Black Marina.

“Coming over the (Mississippi River), I couldn’t see the bridge,” Adam Cook said.

The fog wasn’t quite as thick as the pair hit the water and eased minutes from the launch, pulling into a cypress tree-studded canal an hour after sunrise.

“We don’t worry about getting out here early,” Kurt Cook said of their late fall and winter trips. “We want to let the duck hunters get out.

“The launch is crazy when they are putting in.”

And the uncle/nephew fishing team didn’t need to be there at the crack of dawn — the bass were eating when they put the trolling motor down.

It only took a couple of casts for the first bass to come over the gunnel.

“That’s a good one,” said Kurt Cook, the elder of the two men.

The 2-pound fish went in the livewell to cool its heals for pictures. While these anglers do, occasionally, keep a few bass for the table, they release most of their catches.

“We don’t keep any 3-pounders,” Adam Cook said. “We let everything bigger than that go, and keep the smaller ones.”

This was a catch-and-release day, although they caught about four one-man limits of bass before the fog burned off.

And they caught every fish just minutes from the launch in a complex of cypress-lined waterways called the Shell Canals.

He said that’s something many anglers miss in their rush to find areas they believe are far enough away to be less pressured.

“The population of fish down here is just awesome.”

Bass were scattered along the canals, with some being in relatively shallow water but most setting up a bit farther out.

“They’ll be on underwater stumps and stuff,” the elder Cook said.

“When a front comes through, they might be out deeper, in 6 to 8 feet of water,” Kurt said. “When you have a warm spell, they’ll pull up a little shallower.”

But Adam said they definitely have a preference.

“Flipping is our bread and butter,” he explained. “We’re making sure we hit every side of the tree. 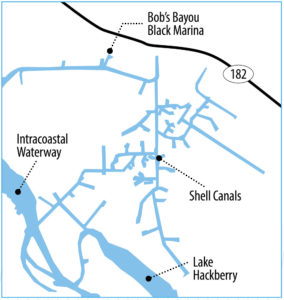 “If you ain’t hitting every cypress tree at least twice, there’s something wrong.”

While this team often burns little fuel this time of year, bass can be caught in pretty much any part of the Bayou Black system — from the cypress swamps up north to the brackish marshes farther south.

But the pattern will be the same in December and January, no matter where you come off plane — bass leave the current of the main bayous in preparation for their springtime mating rituals.

“They’re moving into these dead-end canals right now,” Kurt explained. “They are positioning themselves for the spawn. We can come back in February and catch them right up on the banks.

“I think a lot of these fish are prespawn. In January, you can come in here and catch some really big bass.”

In fact, bass in this southern region of the state can actually spawn in January, if the weather doesn’t turn frigid.

On this day, surface water temps were in the mid-60s. And the bass were chomping like they hadn’t eaten in a week.

Adam put down his crankbait fairly early, opting to start pitching a soft plastic creature bait. And he almost immediately set the hook on a chunky bass.

The Bayou Black system isn’t known for huge bass — a 5-pounder is a pretty big fish here — but it can produce a lot of very nice specimens. Michigan’s Kevin VanDam, for instance, tallied 32 pounds, 5 ounces in the system to win the 2001 Bassmaster Classic.

And, while the Cook boys catch plenty of bass working cypress trees, stumps and laydowns very near the launch, the system offers anglers a wide variety of options.

Cypress swamps dominate north of the Intracoastal Waterway, but head south and the habitat gives way to willows and marshes.

That diversity — along with an extremely healthy bass population — appeals to the Cooks.

“Every form of fishing you want to do is right here,” Adam Cook said. “You can flip roseau canes, fish grass, flip cypress trees, fish marsh ponds — whatever your strength is.”

Of course, as a coastal fishery, it is at the mercy of tropical systems. Fortunately, there hasn’t been a real blow to the area since Hurricane Rita swiped the region on its way to a Texas landfall — and that wasn’t a gut punch.

“I think what helps this area is we haven’t had a hurricane in a while,” Adam Cook said.

“I think it’s the best its ever been since (Hurricane) Andrew,” he said.

By 10 a.m., the anglers had tallied about 40 bass from the canal in which they started the day.

Check out the men’s Facebook pages, and you’ll find this isn’t unusual: These guys more often than not put numbers in the boat.

But sometimes it takes time.

“We’re not ones to fish 30 minutes and leave. We wait them out.”

Kurt said the temptation to leave an area you know holds bass when things slow down is anathema to success.

“Patience is a virtue,” he explained.

That’s especially true in systems like Bayou Black, which are heavily influenced by tidal flow.

“The first hour to three hours of that falling tide — it’s just crazy,” Kurt said. “You can be in a spot and not be catching anything, and that tide starts moving and you’ll start catching fish.

“The fish just react to it.”

Adam explained the effect of current can’t be understated.

“When that water starts moving, the bass move, the baitfish start moving,” he said. “Everything starts happening.”

And you can go from twiddling your thumbs to wrestling bass after bass in minutes — if you don’t spend your time running around.

When cold weather finally moves in, it’s important to adjust to the conditions.

“You want to slow down a lot,” Kurt said. “We’re not in a hurry. We’re not blowing through here.

“The colder the water temperature, the slower you fish. The slower the better this time of year.”

Success also depends on their adjustment to sky conditions. On overcast or foggy days, bass tend to spread out and roam, but things change when there’s not a cloud in the sky.

“They get very tight (to cover),” Adam said. “I’m fishing on the shade side of the tree.

“Fish don’t have eyelids, so they’re going to be looking for shade from the sun.”

And when a genuine norther’ blows through, the Cook boys adjust yet again.

“After a big front, fish might pull out deep in 6 to 8 feet of water,” Kurt said.

For flipping, the Cooks use two soft-plastics:

Adam said heavy weights are the way to go to provoke lethargic bass.

“It gets down to them quicker and you get reaction bites,” he said.

“I like Colorado or Indiana blades rather than the willow leafs,” he said. “They react to (larger baits) better.”

And beefing up the blade forces you to slow down your retrieve.

He also increases success by trimming the skirts.

“I cut it right behind the hook,” Kurt said. “Sometimes they nip the skirt, so trimming it saves you from those short strikes.”

They also love to throw crankbaits, bouncing them off cypress tree, stumps and laydowns — anything around which bass will lie in wait.

“They get those reaction bites,” Kurt said.

Muddy water throws some anglers, who believe bass run from it.

That’s a big mistake, according to Adam and Kurt Cook.

“We’ve caught some of our bigger fish in muddy water,” Adam said.

Kurt said they do avoid the muddiest water, but heavily stained water can hold some really nice fish.

So it’s important to stay in tune to water temperatures.

“If you get some warm-enough days, they’ll move up,” Kurt Cook said. “A change of 4 or 5 degrees, and they’ll start moving up shallow.”

That’s when Kurt and his nephew Adam Cook begin flipping the banks to catch big spawners.

But they said it’s a mistake to focus solely on those shallow bass.