Bass pro Tyler Carriere of Youngsville literally has a trap waiting for bass cruising the shoreline or shallows before they settle down for the spawn.

Carriere depends on a Bill Lewis Rat-L-Trap to hook up with bass in February.

“The fish really try to eat a little bit before they move up and do their thing. It’s a good way to find them,” he said. “I actually caught some the other day.

Carriere, 45, who works as a guide with Fishmaster Guide Service between bass tournaments, catching redfish and speckled trout around Port Sulphur, said he picked up a Rat-L-Trap at a young age while fishing with his father on Henderson Lake. His conviction to keeping it in his hand was reinforced by a local TV fishing show at the time featuring the lipless crankbait.

“Oh, man, I’ve been fishing Traps a while, starting when I was a kid on Henderson, me and my daddy, way back when. That’s when I learned to fish a Trap. We caught some fish on those in an aluminum boat with an 18-HP (outboard), an Evinrude, I think,” he said.

Where to fish it

The Rat-L-Trap started catching bass soon after Bill Lewis introduced in the late 1960s. Carriere plans to use one much of the time, mostly a ½-ounce, sometimes a ¾-ounce but rarely a 1-ounce model, in the prespawn from Toledo Bend to Henderson Lake, to the Atchafalaya Basin and wherever else he fishes in February. He knows how he’ll present it at Toledo Bend.

How to fish it

Carriere prefers probing flats with 4 to 5 feet of water, but he also throws into 10- to 15-foot depths while on flats, preferably with isolated grass patches or stumps, near deep water. The method of retrieve is important, he said, noting he likes to yo-yo it, reel it and repeat.

“I guess you can kind of rip it if you want,” he said. “Most of the time, they eat it on the fall, when it’s starting to fall back down. 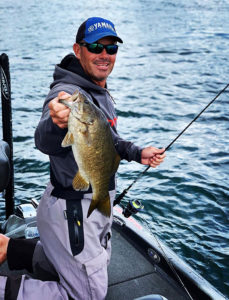 “When you bounce it on the bottom, yo-yoing it, sometimes you don’t feel the bite. Keep watching the line. Don’t crazy set the hook, just snug up on it. Sometimes they do different stuff. Some days they slam it. It’s nice when they slam it.”

He fishes Rat-L-Traps on a 7-foot-3 RainShadow rod with a Six Gill Wraith reel with a 7:1 retrieve ratio loaded with 12- to 15-pound fluorocarbon.

How effective are Rat-L-Traps?

They catch fish any time of the year, Carriere said, pointing out that Cliff “Cajun Baby” Crochet of Pierre Part had an unbelievable flurry in a two-hour period during a MLF Bass Pro Tour event in April 2019 when he caught 65 pounds, 1 ounce at Tennessee’s Lake Chickamauga.