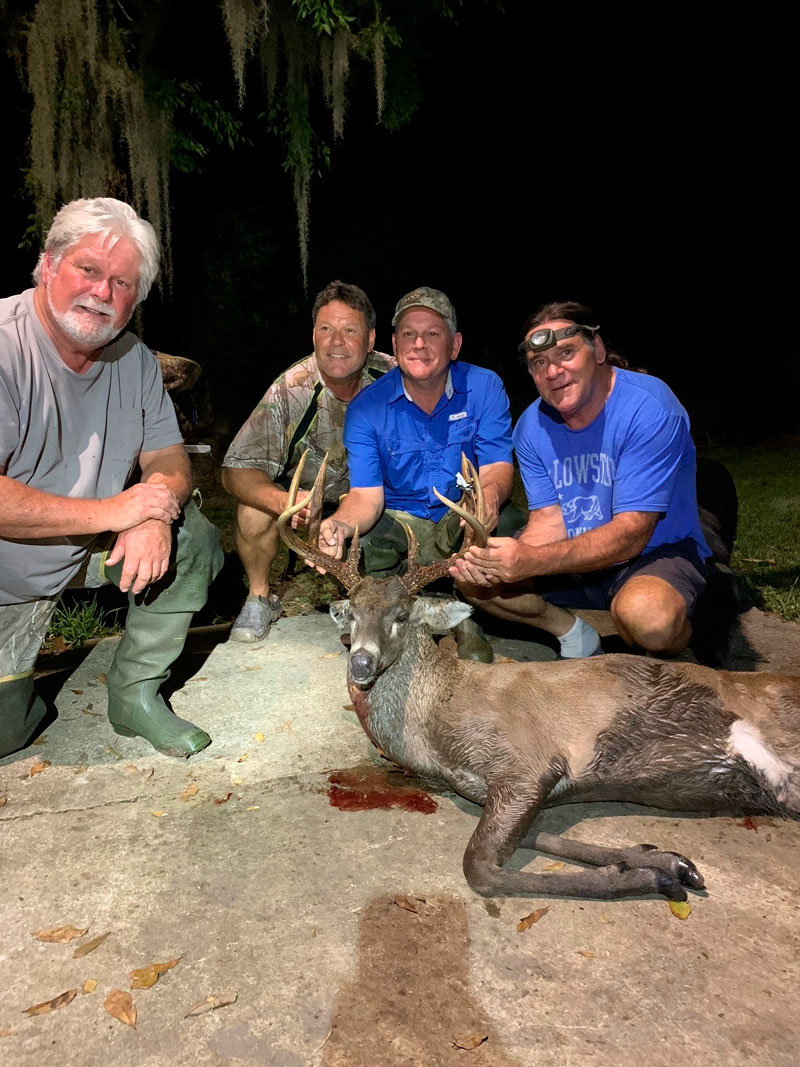 On the afternoon of Oct. 22, my uncle, Saint Patrick Bourgeois, harvested this 170-pound, 8-point buck on our family property located south of Jeanerette. We are expecting it to score in the 125-130 range.

My father, Saint’s older bother, and I had gotten to the camp late Thursday afternoon and made a hunt that Friday morning with no luck. We returned to the camp afterwards and kicked out while discussing the plan for the afternoon hunt through the middle part of the day. The weekend crew began to arrive starting around 2 p.m., with Uncle Saint pulling up to the wharf around 3. The majority of the afternoon hunters were on stand by 4 that day. For some reason, Uncle Saint decided that he would hunt with my dad, who is not a big afternoon hunter and was only planning to get to stand around 5-5:15, to sit for a little over an hour.

They left the camp in the airboat around 5 p.m. and took a 10 minute ride to a section of marsh where we have two open box stands. My dad dropped Saint off on one and moved down to the other. As Saint tells it, he situated himself with his back to the sun focusing on the airboat trails directed to the east for the majority of the hunt, only turning his head to peek at the trails behind him every 5 minutes or so. There was about 10-15 minutes of good light left when he made one of his peeks behind him and he immediately noticed a large dark figure 100 or so yards down the airboat trail. He slowly ducked down below the walls of the box, grabbed his gun and situated himself by turning his seat completely around in the direction he saw the deer. He raised back up over the walls of the box again while resting his .308 on the upper rail of the box stand, put his eye to the scope and quickly located the deer down the trail.

At this point the deer was walking on a bee line directly towards him and had come to be around 50-60 yards away. The deer seemed aware that he was being watched as Saint says his eyes were fixed on the box stand the entire time he watched him in the scope. As the buck continued to close in, he began acting wary and veered off the trail into the tall cut grass. Saint thought that it would be the last time he saw the deer. At about 40 yards out the deer made one last attempt to get a good look at the box by stepping back into the airboat trail and that was the last move he ever made. Saint shot the deer at 40 yards in the center of his chest and dropped him in his tracks.

At 6:44 p.m., we got a text in the family/camp group message from Saint, self proclaiming that he was the new leader of our family hunting club’s Big Buck Contest. It was truly a great afternoon and the whole family got to enjoy it together. This is the biggest buck we’ve harvested from our property in the marsh for the 40+ years that my family has deer hunted that land.