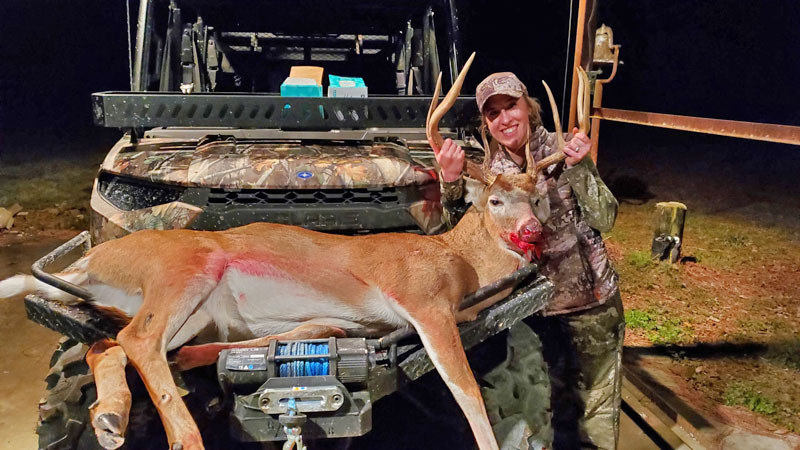 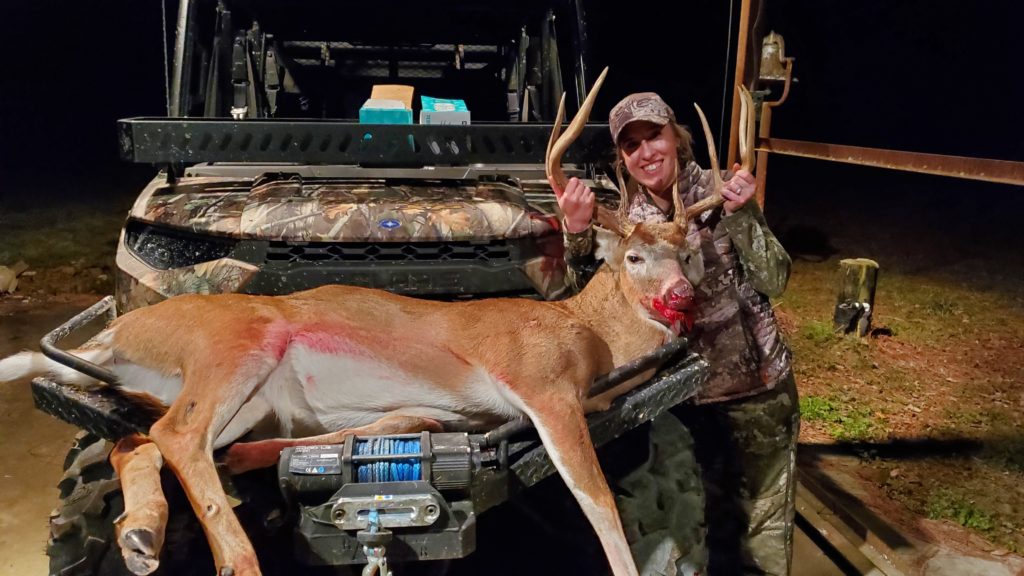 My wife, Katie Vining, is originally from Pittsburgh, PA. We met about 10 years ago and currently reside in Shreveport. We have three kids – John William, 4, Maggie, 2, and Julian, 2. As a stay-at-home mom, Katie’s had a stressful few years. Luckily, she’s discovered the relief that a few hours of sitting the woods can provide.

As a child, my holidays were spent at my grandparents’ farm in Caldwell Parish. The farm is surrounded by the Ouachita River, and within the levees are expansive corn fields, an oxbow lake, and occasionally some flooded timber. Deer typically congregate in the fields at night during the winter months after the corn has been harvested.

My family and I usually make several trips to the farm over the holidays and hunting season, and this year it was evident that Katie was on a mission. She harvested a 3.5 year-old 7-point last year, her first buck, but she was looking for an upgrade. We made it to the farm a couple of days after Christmas.

The largest buck we’ve seen at the farm this year was a tall 8-point with a couple of drop tines. He was roaming the woods by the river in mid-October, but no one had seen him since then.

On the morning of Dec. 31, 2021, Katie was hunting a tripod overlooking a clearing between some thick woods and overgrown fields, almost a mile away from where the massive 8-point was last seen. Around 8 a.m., she saw a large buck peek his head out and meander into the clearing, munching on corn, but there was brush between Katie and the buck. She knew that if he was there eating corn that morning, he would likely come back, so she made a disciplined decision to wait for a better shot.

After not having a good shot that morning, Katie came back at 2 p.m. that afternoon, hoping to get another chance. She watched groups of does come and go, and then around 4 p.m., the big buck from that morning came back out. This time there was clear line of sight between Katie and the buck, 40 yards away. She didn’t hesitate, and immediately got him in the crosshairs and took the shot with her Browning .243.

Right after she shot, I received one of the coolest texts ever, simply saying “I shot and I got him.” After loading our oldest son in the buggy, he and I took off to help Mama Katie look for her deer. Unbeknownst to me, this 250-pound behemoth was only laying about 20 yards from where Katie shot him – she had made a perfect heart shot.

We were both ecstatic and I was so proud that my wife had turned into such a dedicated, disciplined and skilled deer hunter. Once we got closer, I realized that this was the monster buck that was last seen 1.5 months earlier. It appeared he had broken his drop tines between then and when Katie shot him, but it was clear he was the same deer.

He weighed in at 250 pounds and Simmons Sporting Goods scored him 138 1/8. It’s certainly a buck and story of a lifetime for Katie, a city girl turned country, but I have no doubt she’ll have many more to come in the years and seasons to come.