You can find delicious, oyster mushrooms at high-end markets — or you can harvest them for free in many wooded areas.

Amid the waving willows along the levee of the Mississippi River in Ama is a delicacy that Randy Lauve has harvested since he was a kid.

Oyster mushrooms can be elusive, but Lauve knows how to find them.

“The best time to pick them is during the winter on a cool, foggy morning,” he said. “Once the sun hits them on a sunny day, they’re not good anymore.”

Pleurotus fungi, a genus of gilled mushroom includes oyster, abalone or tree mushrooms, is wild but also the most commonly cultivated edible mushrooms because they are delicious. You can buy oyster mushrooms at Rousse’s in New Orleans for $7.99 a pound.

But this mushroom hunter loves them — wild.

“They grow on rotting trees … downed willow trees,” Lauve said. “But they’ve got to be fresh, and you’ve got to get them right away.”

Lauve gathers them from willow trees the way his grandfather taught him. And, now, his 21-year-old son helps gather them — just the way Lauve showed him.

They seek out willow trees where the mushrooms are typically plentiful, although he’s observed a decline in their number along the river in recent years. They are easier to identify, making it safer to harvest them. Being able to identify any mushroom is important to avoid consuming the poisonous or even hallucinogenic varieties, but Lauve has years of experience identifying them.

In appearance, they don’t have the look of a typical mushroom, but rather resemble a mushroom cut in half sticking to the tree, he said. They have an oyster-shaped cap, hence the name, with gills that run down the stem. They typically grow in a shelf-like formation with overlapping clusters that are white to light brown with firm, white flesh. They smell slightly sweet, like licorice.

It’s literally second nature to Lauve having grown up on a farm.

“I’ve picked some probably as big as your head,” Lauve said. “I don’t really like the big ones like that but prefer the smaller ones no bigger than your hand because they’re tender.”

The bigger ones have a skin that is typically removed, but he considers them tougher.

He could harvest other wild mushrooms, but he prefers the taste of the oyster mushroom.

“It’s the only kind that I use,” Lauve said. “I cook a lot of wild game. My wife doesn’t eat much of that, but she likes the mushrooms.”

He’s serious about this menu.

Lauve’s dishes have included rabbit, squirrel, duck, nutria and even raccoon (smoked coon gumbo), as well as rattlesnake (sauce picante). And, yes, they include oyster mushrooms.

“They’re also real good fried,” he said. “My favorite is them on the grill.”

His grilled mushrooms include a tantalizing mixture of butter, garlic and Italian dressing. 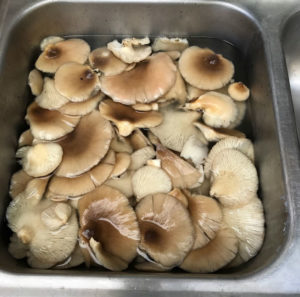 In his many adventures on the hunt, Lauve did recount a close call with the mushrooms.

Lauve was on his four-wheeler behind the levee on a little trail he uses where he typically finds them when he spotted a branch extending from a tree loaded with the mushrooms. But it was 30 to 40 feet high so he went on in search of more accessible mushrooms and, when he didn’t find them, returned to the site of his big find and discovered the branch had fallen after he left. Had he stayed, it might have fallen on him.

“That’s the weirdest thing I’ve ever seen,” Lauve said. “Maybe God wanted me to have those mushrooms. I don’t know. That was crazy.”