These hunters lay the hammer on swine in East Louisiana

John Storey of Slidell, Warren Ostarly of Covington, and Mike Gettle of Chalmette hunt hogs with dogs year-round, but in February, they lay the hammer on swine in the Bogue Chitto and Pearl River Wildlife Management Areas. And this past February was no exception.

An active type of hunting

It’s a very active type of hunting, and that’s one of the reasons these friends enjoy it so much.

“This isn’t sit-and-wait hunting,” he said. “You’re constantly moving, sometimes long distances, and once you get a hog, getting it back to the boat can be a very physical chore.”

The three hunters take a big boat into the swamps with five or six dogs and necessary gear, which sometimes includes a smaller boat for more secluded areas. They tether one or two dogs to the front deck, and then creep slowly through the swamp, letting the canines sniff the air.

When the dogs get a whiff of pork, they let the hunters know. Then it’s time to beach the craft and let the dogs loose. Each one is equipped with a GPS tracking collar that transmits to a unit the hunters carry. A screen on the unit shows each dog’s location.

How to hunt doggy style 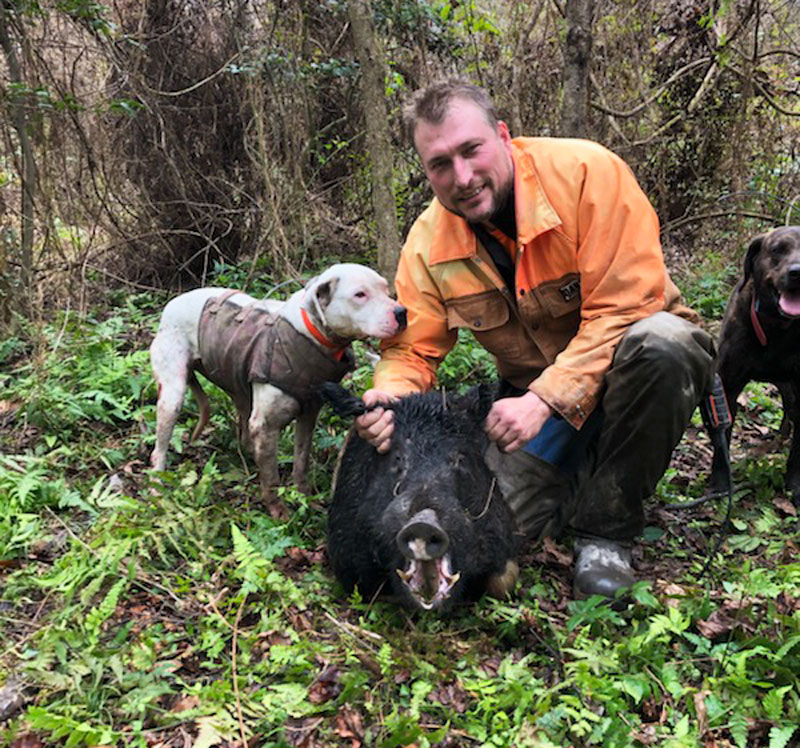 “The dogs hunt silently, pretty close together, but when you see them all in one small cluster, you know they’re on a hog,” Storey said. “They’ll bark up a storm once they find a hog, but they are sometimes too far away for you to hear them. But you’ll know it’s time to walk when they’re all clustered on the screen together.”

And that’s when it’s time for the hunters and the “catch dog,” to move in.

“It’s mainly black mouths, plot hounds, and catahoulas that do the running,” Storey said. “They’ll get a hog cornered and hold it there until we come in. You’ve got to have the bulldog on a leash because they’re so aggressive. Once it’s time, you let the bulldog free and he’ll just run in there and grab the hog, usually by one of its ears. And they’ll hold on until you have to coax them off.” 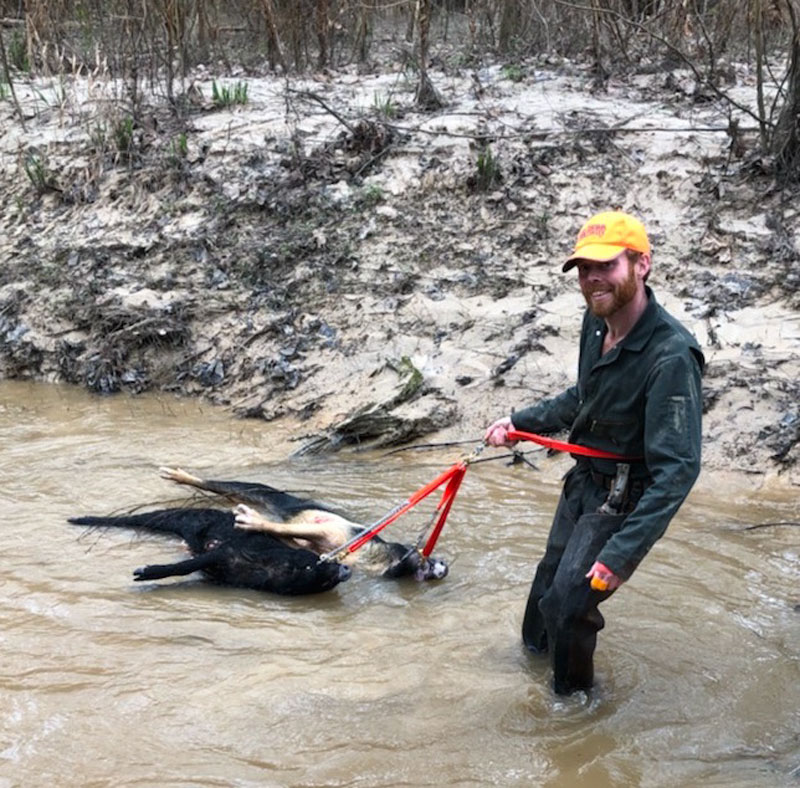 The hunters then slip up beside the hog with a knife and end the hunt by stabbing it under the pit of its front leg.

“It’s by far the quickest and most humane way to kill a hog,” Storey said. “The blade goes in smooth as silk and it just stops the heart immediately.”

And that’s when the real work begins. The hunters take turns dragging the hog back to the boat, or if they’re close enough to water, they’ll float the hog back.

“Floating it is the way to go. That definitely beats dragging it over cypress knees through the swamp,” he said. “And once we get everything loaded up, we crank the boat and do it all over again.”

Feral hogs can carry a number of diseases, some of which can be contracted by humans. And at least one of those nasty bacterial infections can be fatal.

But cleaning and consuming feral hogs can be done safely, as long as you take some common sense steps to prevent contamination.

Here are the top 6 ways to safely handle feral hogs:

About Brian Cope 130 Articles
Brian Cope of Edisto Island, S.C., is a retired Air Force combat communications technician. He has a B.A. in English Literature from the University of South Carolina and has been writing about the outdoors since 2006. He’s spent half his life hunting and fishing. The rest, he said, has been wasted.