“I was at the Grand Isle Tarpon Rodeo,” David Meyers explained, “when an old timer told me about using macaroni boiled in crab boil for mangrove snapper chum.

“He said, ‘Sometimes it works; sometimes it doesn’t.’ Usually it does.”

Meyer’s preference is for the largest-sized elbow macaroni in the store. The night before this trip, he boiled five 2-pound bags of it with crab boil seasoning and stored it in a covered 5-gallon bucket for the trip offshore.

“Be careful not to overcook your macaroni or it gets super-soft,” he cautioned.

Overcooking makes it difficult to handle (as does allowing it to dry out) and almost impossible to put on a hook. At times, Meyers will use the macaroni for bait, as well as chum. 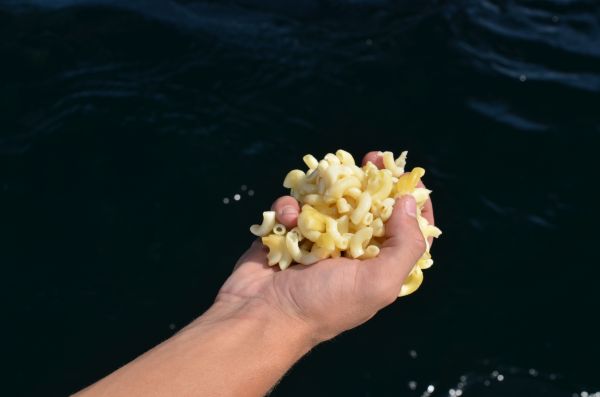 I asked him why crab boil is added.

“I don’t know if it would work without the boil seasoning,” Meyers said. “I’ve never tried what the crab boil has to do with it.”

Out on the water the next day, the two Meyerses and Blanchard liberally tossed handfuls of it under and near each rig’s legs.

It was cheap, and they didn’t have to spend time on the messy job of cutting up fish for chum.

Don’t be afraid to tie on a crankbait around heavy cover. Greg Hackney’s go-to lure for June is a Strike King KVD 1.5 or 2.5. Baits with two treble hooks. […]