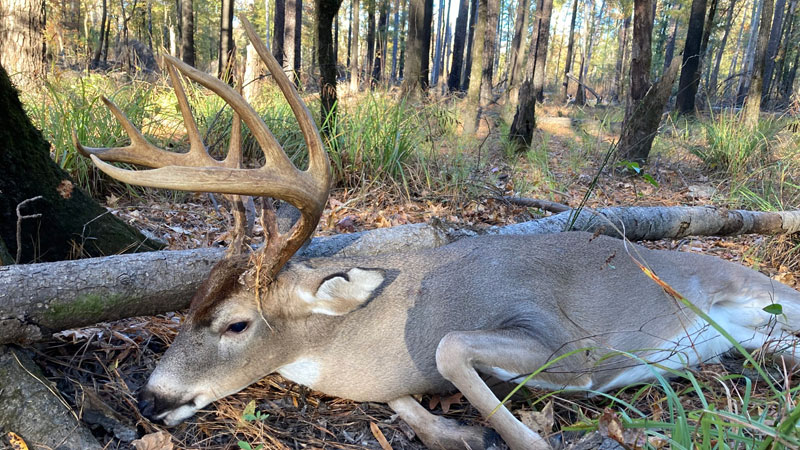 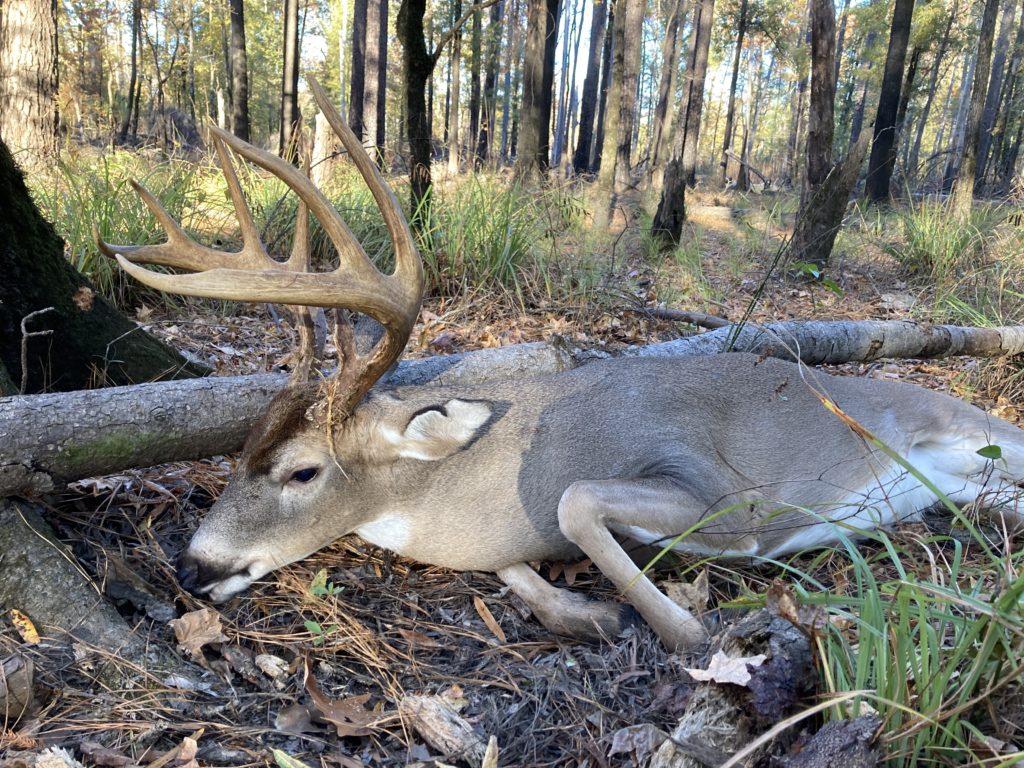 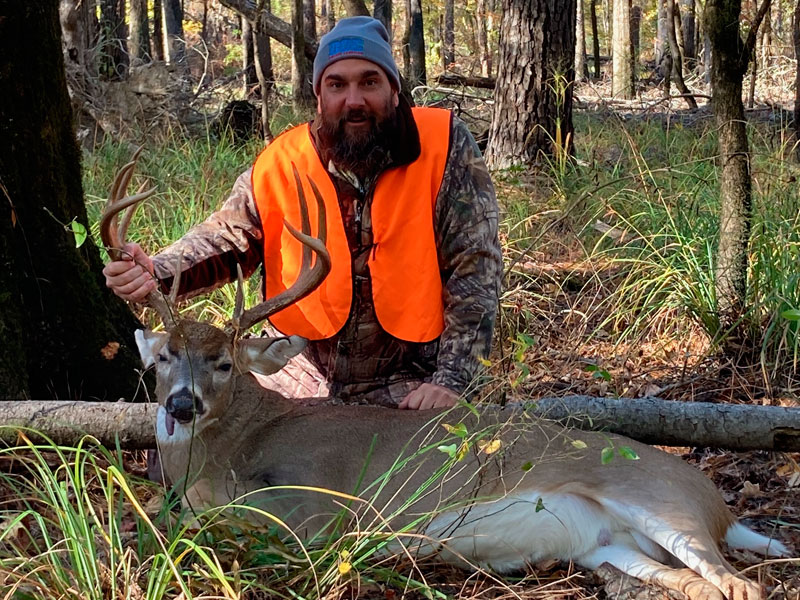 On Friday morning, Nov. 19, the temperature was a crisp 32°. I finally was able to sneak in the woods and get a hunt in after moving into our new home the front end of the week. At daybreak I slipped down to one of my favorite spots in the Bodcau WMA with the mindset that I was just happy to be in the woods. I didn’t put any pressure on myself to feel like I had to see something. I was just going to enjoy the peace and quiet.

I got settled in with my small fold up stool and my shooting sticks. I’m sitting behind a laid down tree providing good cover with brush all behind me. At 7:15 a.m. a flash of white caught my attention to my left. Two does were kind of playfully prancing down from a tall ridge and headed my way. About the time they got 40 yards from me I noticed another deer coming behind them. There was a young 4 pointer pushing these two does. I watched them pass by me and with a big smile I let them go on their way.

I guess it was about 30 minutes later, I caught movement again, this time to my right in the same place the previous deer I saw disappeared to before. There was a tree that was swinging back and forth, shaking in the sunlight! I followed the tree down, from the leaves up top to the base down low, and seen the biggest set of horns I had ever seen on Bodcau! This giant of a buck was making a rub and I couldn’t believe what I was seeing. Even at 125+ yards I could see this deer’s headgear with only my eyesight. I repositioned my shooting sticks and swung my gun around to get a better look. Zoomed my Nikon in all the way and watched this deer showing off his dominance in epic fashion for about 10 seconds before realizing that I can’t even shoot him. All I could see was his head and horns. I had no clear shot from the brush and saplings that were in the way.

As the deer started walking again, in a direction that was not towards me, I knew I had to do something to get his attention. I keep a Flextone grunt call around my neck at all times during the rut and decided to give it a go. I hit the grunt fairly aggressively and the big buck stopped and turned his head towards me. After a brief look, the buck continued on his way and I thought he was gone forever. I couldn’t force a shot there and chance wounding that deer or missing altogether. I would have had nightmares surely the rest of my life. After sitting there for roughly 10 minutes, running all that took place over and over again in my head, I decided to hit my grunt call again. This time a little louder and followed it with a doe bleat as well. No quicker than I let go of my call, I looked up and there he was, coming straight at me! Head up, looking my way, it was like he was on a string! 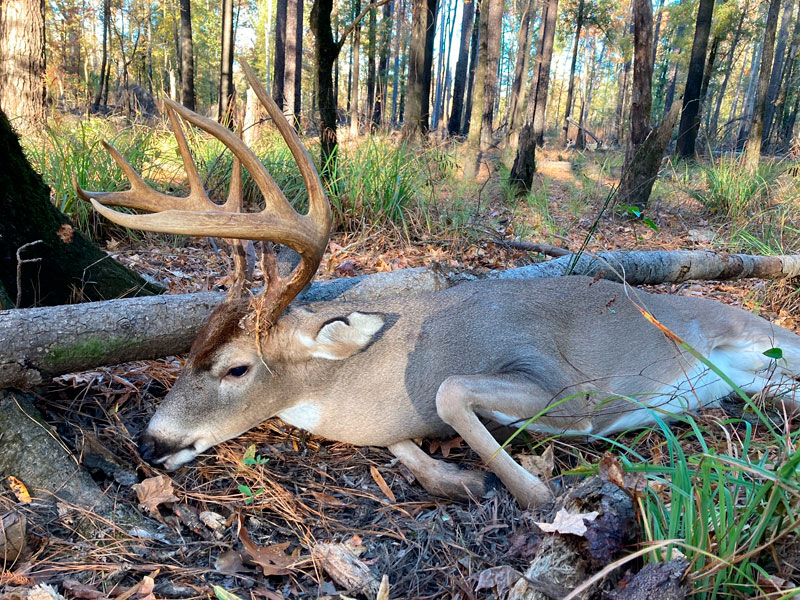 Now I’m repositioning my shooting sticks and swinging my gun around again. I get the buck in my scope and wait for him to give me a shot. As he gets closer, about 80 yards out, he starts turning south giving me a broadside shot. When he walked in an opening I let out a “meh” to stop him and he does. He stops with his entire shoulder and vitals directly behind a tree. Dead silence. No sound at all. Heart beating almost out of chest. I wait. Then the buck continues walking giving me a chance to breath again. I find another wide opening and I stop the deer again. This is it, the moment I’ve been waiting for all morning! With a wide open broadside shot I squeeze down on the trigger and “click.” The only sound I hear is the sound of the firing pin clicking down on the bullet. The bullet did not fire. My trustworthy Weatherby .308, loaded with a Hornady Superformance 165 gr. bullet that I swear by and will stand behind till the day I’m gone, did not fire. I couldn’t believe it. 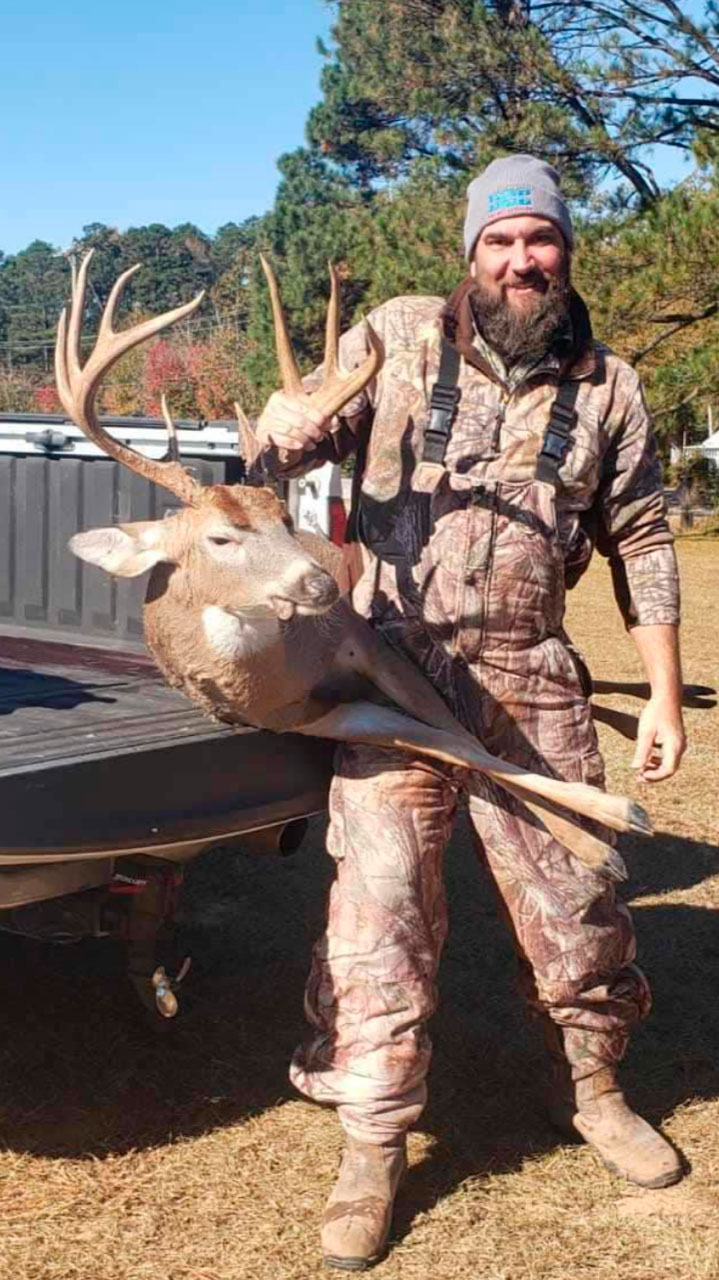 All the while this buck of a lifetime is standing there looking at me from 70 yards. Without hesitation I jacked another shell in the chamber, settled back in on the deer and squeezed again. This time success!! My bullet fires, hitting its mark, and my giant public land buck hits the ground where he stood. Even though it felt like an eternity, from the time my bullet didn’t fire to the second shot, it was only a couple seconds. Immediately I jumped up, fired up with excitement! I couldn’t believe what had happened. How did I get so many chances at such a mature buck? I didn’t have the answers but at that moment I didn’t need any. I had just accomplished my goal for this hunting season! To kill a big mature buck on public land that I had been hunting for 5 years! It proves that patience is key. It proves that letting young deer walk can give you the chance at a trophy buck. And it proves that deer calls really do work in the right situation and at the right moment! My relaxing day of peace and quiet in the woods turned into killing an awesome buck and I couldn’t be happier!

Kayden Romero caught this beautiful bass at a private pond in Lafayette Parish using an open face reel. He is my great grandson and he loves EVERYTHING about hunting and fishing just like his great […]