There have been times when people might swear Greg Hackney is fishing with natural bait — shiners or something alive — when they watch him catch so many bass in January.

Nope. He isn’t using live bait. Hackney, who fishes Major League Fishing’s pro bass tour and is the host of the Louisiana Sportsman TV show, just relies on his No. 1, go-to bait no matter how cold winter chills the water.

“Bass like tight (wobbling) crankbaits in January,” Hackney said. “Strike King makes a crankbait called a Lucky Shad. In January, we can have some really cold water temperatures. Thirty-five to 42 degrees, I’ve caught on it. I’ve caught on it in the 30s.

“It just never gets too cold. Super cold. High pressure. That’s where the bait really shines. I don’t throw it much when the water’s above 50 degrees,” he said. “It’s kind of a no-brainer. In a typical situation, just pick it up and throw it in areas where you think they are. It’s a bait you can pick up and go with it around trees (especially cypress trees) and grass.”

Hackney, a three-time Bassmaster Elite Series champion who qualified for 15 Bassmaster Classics, likes to fish it in cold canals.

“Realistically, once the water gets cold in the canals and deadend canals in the marsh, there comes a time they like to be protected. This gives you the opportunity to get bit on days when it’s really hard to get a bite,” he said.

“You don’t have to hit anything, it’s so lifelike. It doesn’t matter how clear the water is. It’s just super natural. It looks like a minnow. A lot of times when it’s cold, fish don’t relate to anything.”

A Lucky Shad is made of balsa wood, with an elongated body and flat sides that give it its tight action. Lucky Shad are also built with 3D eyes, and they possess one other feature that really appeals to Hackney.

“It has a ‘one-knocker,’ which I like,” he said, describing a large, single rattle that emits a steady thump. 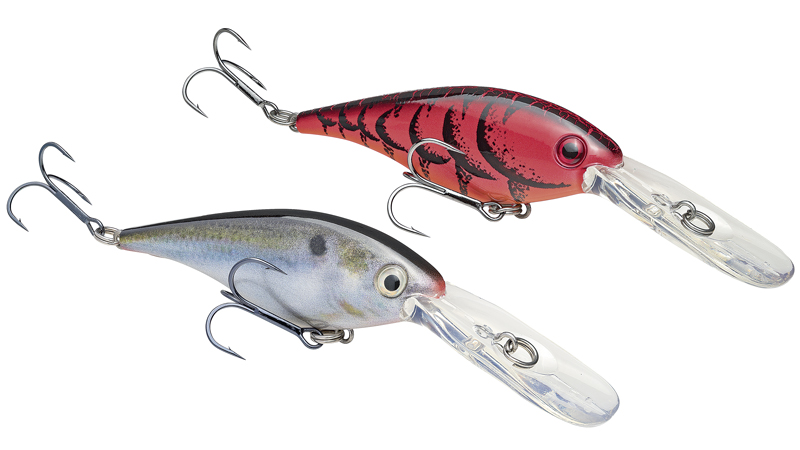 Hackney does modify the Lucky Shad before he ties it to 10- or 12-pound fluorocarbon: he changes out the treble hooks.

“I usually put short-shank No. 4 hooks on it,” he said. “It actually comes with 5s and 6s.” Hackney likes the Mustad KVD short-shank trebles, saying their hooks are heavier and will help the bait suspend when the retrieve is stopped.

Hackney likes to fish the Lucky Shad in two colors most of the time.

“They make a bunch of different colors. I typically stay with two: Delta Craw (also known as Delta Red) and natural shad,” he said. He will occasionally throw the bait in fire tiger.

Start shallow, but best bite at Toledo Bend is deep

Fish STACK UP in this deep-water area!

About Don Shoopman 364 Articles
Don Shoopman fishes for freshwater and saltwater species mostly in and around the Atchafalaya Basin and Vermilion Bay. He moved to the Sportsman’s Paradise in 1976, and he and his wife June live in New Iberia. They have two grown sons.