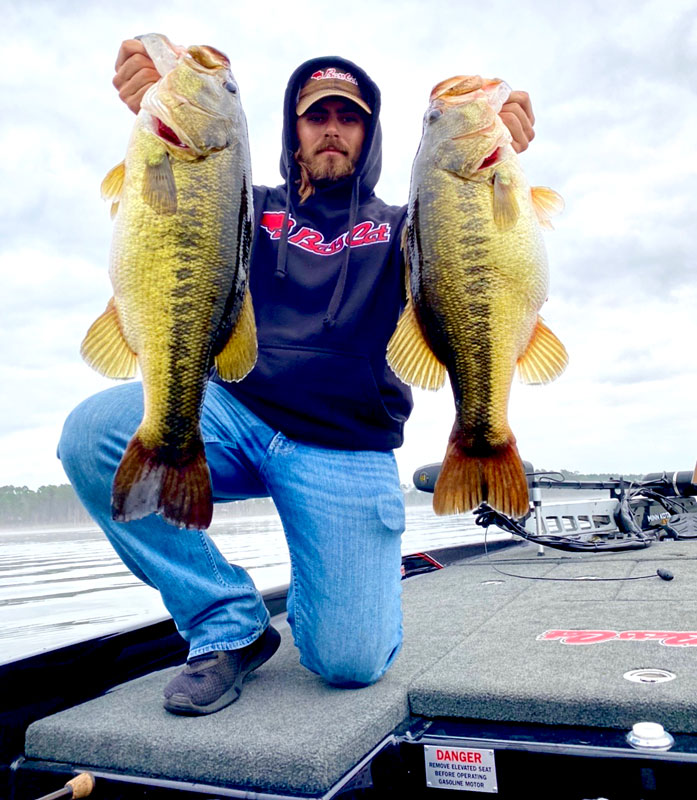 Monroe pro/guide has the ticket to celebrate while turning the calendar page to 2021.

Many people catch fish to eat.

Hunter Freeman, a bass pro and guide from Monroe, catches fish to help pay his bills, so he can’t depend on luck or on conditions being just right. His approach to consistently catching bass — especially big bass — can help others do the same, especially in cold weather.

Freeman fishes all over the country, but nothing is more fun for him than spending a few days back on Louisiana lakes in search of chunky, prespawn lunkers. And they don’t get much more fun or chunky than in January.

But as Charles Dickens said in “A Tale of Two Cities,” it can be the best of times; it can be the worst of times. But the upside makes it worth giving it a shot on a regular basis, Freeman said.

“The best thing is that, in January, even though the big bass seem to spread out and not really be aggressive, they are still going to feed every day unless something unusual is going on,” Freeman said. “They will find a spot like a hump or a hard bottom or a couple of big stumps close to bait, and they will set up there to feed. It’s all about timing. You have to locate those fish there when they are going to eat, and then get the bait to them where they don’t have to chase it.”

Freeman said you’ll sometimes pull up on a spot like that and see big fish, maybe catch one, and then come back again and they are gone. Often, when they aren’t in a feeding mood, they will pull off the cover and suspend in deeper water nearby. When they do, you aren’t going to catch them.

“As the weather warms a bit and the fish move into prespawn at the middle or end of January, then you will always find them around the food,” he said. “They haven’t bunched up yet and may not bite all the time, but they won’t be far from the food. It’s funny, because a lot of times, you’ll hear about crappie fishermen catching 40 crappie and hanging a 10-pound bass. That’s because all the fish are hanging around the food.”

Freeman said you can take three basic lures and cover any situation for cold-water bass. One thing they share in common is the ability to get deep where winter bass like to stay.

“With the fish spread out, there’s no better way to cover an area that you see big fish in than with a big, 20- to 25-foot, deep-diving crankbait,” he said. “It’s the most-aggressive approach and the best way to get more than one of them to bite. Almost without exception, that crankbait is going to pull out the biggest fish first. If the big fish has any thoughts of feeding, it will get that bait first. It’s a dominance thing.

“A lot of people start on a spot with a crankbait, but I take a different approach. I like to throw a plastic rig first and try to catch a couple, then go back with the crankbait and try to get the big ones,” he said. “Some good crankbaits for this are the Strike King 10XD, ZeeBoss 25 or Sixth Sense Cloud Nine C25.”

Fishing a Carolina rig is the least-aggressive way to approach cold-water bass, he said. It’s important to get the bait right in front of the fish, and the slow presentation allows more time to trigger a strike.

“When the fish are lethargic, you can still make them bite, but you have to slow it down,” he said. “I also like to use a longer leader, sometimes 3 to 4 feet long, to let the bait dangle in front of the fish longer.”

“This is a lure that you put right on the cover: brush piles, stumps, a defined target,” he said. “You have to put the bait right in front of the fish, just like the Carolina rig, but it is also a more-active presentation. Sometimes, the bigger profile of a jig with a big trailer works. Sometimes, you have to cut it down and try that. The key is to be versatile and see what it is the bass want.

Regardless of the lure, it’s important to not give up too quickly on winter bass. Try the spot from different angles, and if you know fish are there, come back later, and maybe you’ll find them in a better mood. And always pay attention. You never know when you’ll get that little bitty ‘tick’ of a big old bass taking your lure.”

“Actually, that’s about as good as it gets when you see this,” said bass pro Hunter Freeman of Monroe. “You’ve got some big bass (the small white dots), a school of shad or baitfish, and they are set up on a hump right off the edge of a creek channel.”

While the fish shown here aren’t actually chasing the shad, the fact that they are up off the bottom and not grouped tightly together means they are ready and willing to eat. It’s a great spot to back off, cast out a deep-diving crank bait and reel it right past them.

Then wait for the bite, reel them in and grab the net. Happy New Year.

Even the best jig can use little help

There are dozens of really good jigs on the market, and bass pro Hunter Freeman packs a lot of them. They come in all sizes, colors, weights and especially, skirt lengths. His go-to combo is a black/blue, 1/2-ounce Bryant’s Custom flipping jig with a trimmed-down Zee Bait Bamboo Bomber as the trailer.

“I’ve got some that are 3 inches long and some that are just an inch or so, but one thing I like to do in the colder water is often add a little bit of my own touch to the jig,” he said. “That starts with a trailer to give the bait a little more bulk, a little more action and slow it down on fall.”

There are two other tricks that Freeman adds. First, he likes to trim the skirt a little bit so the trailer shows and has a good action. Trimming it takes just a few seconds; he keeps a small pair of scissors in his tackle box for the task. He also likes to often split his trailers to give it more swimming action.

“It’s just a little trick to make the bait a little bit different, and it also gives me confidence when I see the bait look even better in the water,” he said.

According to Katie Duplass, January is when the offshore pivots towards migrating pelagic fish such as wahoo and larger yellowfin tuna. […]

About Kinny Haddox 364 Articles
Kinny Haddox has been writing magazine and newspaper articles about the outdoors in Louisiana for 45 years. He publishes a daily website, lakedarbonnelife.com and is a member of the Louisiana Chapter of the Outdoor Legends Hall of Fame. He and his wife, DiAnne, live in West Monroe.