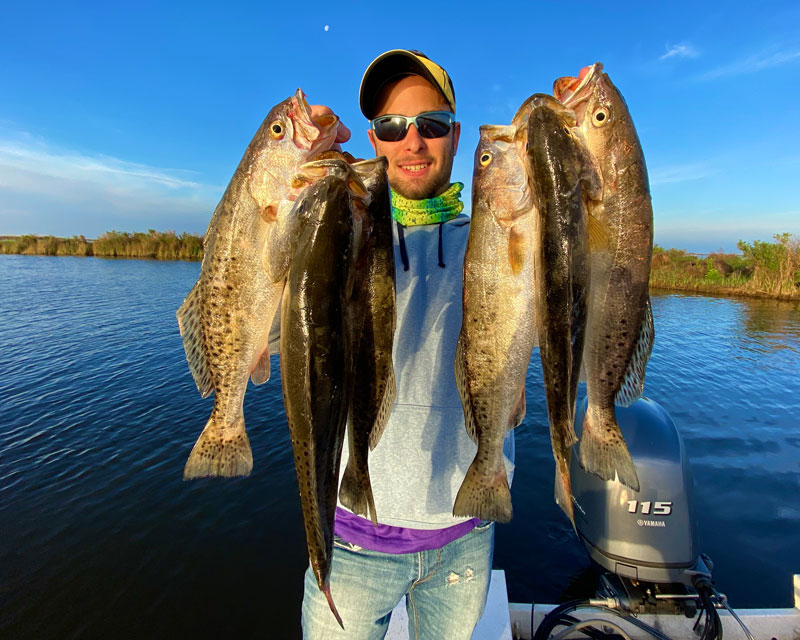 Louisiana specks will be in one of two places this month, depending on the weather. Here’s how to keep up with them.

Inform someone from, say, Wisconsin that Louisiana is in one of the earth’s subtropical zones, and they might assume we walk around every day in shorts and flip-flops with umbrellas in hand to shield us from the unblinking, broiling sun.

But as those of us who live in the Bayou State know, January can get pretty chilly. In fact, it’s our coldest month. In Baton Rouge, for instance, the average nighttime low for the month is 40 degrees.

That means it’s a page our resident speckled trout surely can’t wait to rip off the calendar. Although the species ranges as far north as Virginia, it despises cold water. As a general rule, specks quit feeding in water temperatures below 50 degrees, and when those temps stay in the 40s for an extended period of time, they go belly up and turn into crab food.

So, with apologies to Dickens, speckled trout fishing in January can be the best of times or the worst of times, and it all depends on how much of the month Jack Frost spends camped out in the lower reaches of the continent.

To be sure, there WILL be cold fronts. South Louisiana has never seen a January without them. But their duration and severity are the keys to their impact on trout fishing. A typical winter cold front that drops air temperatures into the upper 20s or lower 30s for a couple of nights will likely drive specks to slightly warmer thermoclines in deep-water bayous and canals.

Such areas usually are devoid of baitfish, so the specks don’t feed much. They’re in pure survival mode, just waiting for better conditions to even consider putting food in their bellies.

That doesn’t mean they won’t eat if given the opportunity, however. If they’re huddled together, and a baitfish comes wiggling through the crowd, it’s got no chance of seeing the other side alive. Just one baitfish in the belly of a speckled trout this time of year can mean the difference between surviving the winter and heading up to the great marsh in the sky.

That’s why fronts that are seasonably cold but not frigid can produce some of the year’s best action. An angler who finds where the fish have ganged up to flee the cold water can leave not many minutes later with his limit.

As a general rule, smaller baits, like the H&H Baby Bull Minnow, are more productive in these situations, because the fish don’t want to risk expending energy to chase something that’s more formidable. Also, baitfish in the marshes tend to be smaller this time of year.

Typically, these fronts will have northerly winds for a day or two, followed by a calm, high-pressure day and then a return flow off the Gulf that will endure until the passage of the next front.

On those return-flow days, water temperatures begin to warm, and it doesn’t take the specks long to notice their stomachs are growling. In an effort to fill them, they fan out onto nearby flats, searching for glass minnows, finger mullet, pogies and overwintering white shrimp. This is especially true on warm afternoons with rising tides, when the sun has had all day to heat up the flats.

Flats that are especially productive are those with oysters, clams or patches of grass that hold on through the winter. Baitfish and shrimp don’t spend their days out in the open over featureless bottom. They cling to anomalies that offer them cover from predators. Speckled trout instinctively know this, so that’s where they focus their hunting efforts. They’re like lions waiting at a watering hole for throat-parched zebras to show up.

The same tight-lined soft-plastics thrown to the fish when they were locked in the deep holes will work on the flats, but with the jigheads they’re threaded on reduced from 3/8-ounce down to 1/4- or even 1/8-ounce.

Usually, however, an even better strategy is to throw shrimp-imitating lures, like TKOs or Vudu Shrimp, below corks. By January, most shrimp have left the marsh, but specks still love them, so they respond immediately to any they see. Also, lures under corks are necessarily slow-moving, and more accurately imitate cold-blooded bait this time of year.

These productive flats are always adjacent to those deep-water areas, because instincts tell the fish they’ll likely need to seek their protection again soon. Specks follow this shallow-to-deep-to-shallow pattern multiple times during a typical winter, especially in January.

No, our weather is seldom as cold as Wisconsin’s, but to speckled trout, it can feel downright Nordic.

Terry Smith said his arsenal of speckled trout baits is fairly limited; he sticks with baits that have fooled fish in the past. […]

Chas Champagne heads out before the Big Freeze of 2021 with one more run on big speckled trout using the Matrix Minnow suspended jerkbait. […]

Pick your days to fish Calcasieu in February

Calcasieu Lake trout bite best in February on pre-front days. There will be some big sow speckled trout landed this month. […]